Have you seen the ads where a popular celebrity touts DIRECTV on his own behalf and as the Painfully Awkward, Overly Paranoid, or Crazy Hairy version of himself? Applying that to a lawsuit just filed by the FTC, there’s DIRECTV – and then there’s Deceptively Advertised DIRECTV.

DIRECTV is one of the biggest names in the business with more than 20 million customers. Through TV, print, direct mail, phone, and online promotions, the company advertises satellite TV packages for as low as $19.99 a month for 12 months. What’s more, DIRECTV said premium channels like HBO and Showtime are “free for 3 months.” But according to the FTC, DIRECTV failed to adequately disclose the true nature of the deal, meaning that consumers got stuck with higher prices and unauthorized charges. 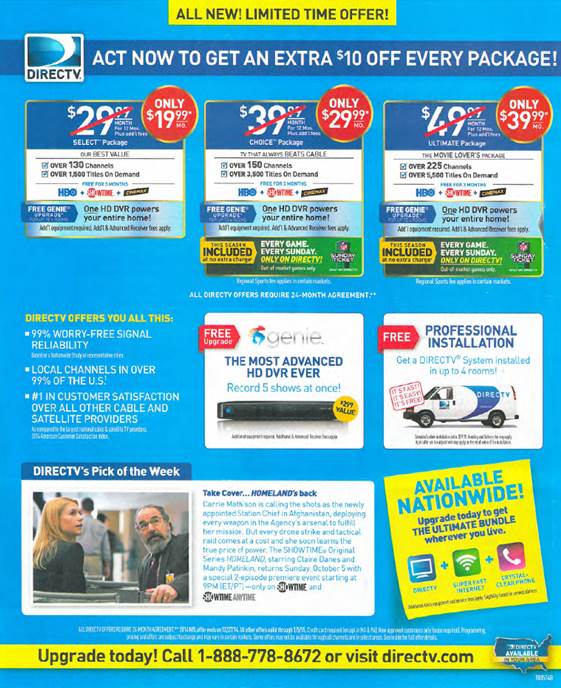 The complaint offers a closer look at how the FTC says DIRECTV’s practices were misleading. For example, DIRECTV touted that eye-catching $19.99 monthly rate for 12 months of service without clearly explaining that: 1) Consumers couldn’t actually sign up for 12 months of service because DIRECTV required them to commit to 24 months; and 2) In the second year, DIRECTV typically hiked up the monthly fee by between 50-70%. Consumers who experienced bill shock at the start of that second year and wanted to cancel faced hefty termination fees.

The FTC also says DIRECTV’s “free for 3 months” premium channel offer was a deceptive negative option promotion. How did it work? DIRECTV typically enrolled consumers in the promotion automatically without clearly stating that unless consumers took the affirmative step of canceling before the end of the three-month period, DIRECTV would bill them extra for it every month. According to the complaint, after the “free” period ended, DIRECTV went ahead and used consumers' credit or debit card information without their consent to charge them for the service. And we’re not talking chump change here. The FTC says the monthly fee for those channels was around $48.

The lawsuit is pending in federal court in California. Meanwhile, here’s something for businesses to note in the pleadings. In addition to alleging that DIRECTV failed to disclose – or failed to adequately disclose – subscription prices and the nature of the premium channel offer, the FTC says the company's online practices violated the Restore Online Shoppers’ Confidence Act.  Passed in 2010, ROSCA makes it illegal to charge consumers for goods and services sold through online negative options unless the seller:

This is a case you’ll want to watch.

Krysk24
Att and DTV are the WORST!! Don't follow through on their commitment, but bill customers thousands without their knowledge!! How does a person get out from under without paying all the false charges!! It's highway robbery!!!
Noel Freedman

In reply to Att and DTV are the WORST!! by Krysk24

To report a problem to the FTC, go to www.FTC.gov/Complaint. The information you give will go into a secure database that the FTC and other law enforcement agencies use for investigations. The comments you put here on the blog don't go into the secure law enforcement database.

Josh Ward
I too am now a victim of Directv’s shady business practices. They promised a promotion for the premium channels and I assumed (logically) that when the promotional period ran out, I would no longer have access to those premium channels I had access to under the promotion. That is apparently not the case. I have been charged 2 months worth of unapproved charges. Each month added $53.99 plus taxes and surcharges to my bill. We specifically chose the “choice” package because it was cheaper than Spectrum’s packages and we didn’t want to pay for premium channels any longer. Well, that went out of the windo apparently because they will not refund me for those two erroneous bills. I am currently disputing the charges with my credit card company (Capitol One). I am hoping for a successful dispute because I never gave verbal nor written approval to be charged for premium channels that I did not want nor choose from the beginning. I am not sure how they are still getting away with this...
Kelly
I have been reading these comments and stories and mine also is a nightmare. I feel foolish, stupid, and yet I was lied to plane and simple. All these people, so many.WHERE IS OUR PROTECTION? WHY HAS THIS GONE ON FOR SO LONG..A LAW SUIT!! WHERE DO I GET HELP? I AM A WOMAN ALONE AND FEEL LIKE A USED "QTIP"..I AM THE FOOL FOR TRUSTING EHAT I BELIEVED WAS A SOLID BUSINESS. I WONDER HOW DO THE EMPLOYEES FOR SUCH A CRUEL DECEITFUL BUSINESS FEEL ABOUT THEIR PART? THEY KNOW, THEY ? THEY KNOW AND THIS IS FRIGHTENING TO NOT BE IMPORTANT ENOUGH TO DO THE RIGHT THING. WHY IS IT FAIR TO MAKE "ME AND "YOU" PAY OUR BILLS? WE ARE OBLIGATED? THE BUSINESS SHOULD BE RESPONSIBLE ALSO.
Kristin
I just had this problem! My service goes out regularly and I was told that even though I am paying a monthly equipment fee that any service call would be a charge. OR I could purchase their protection plan? Well why am I paying for equipment then paying again for them to maintain their equipment!
Patti Kennedy
They charged us an extra 25.98 a month for more than a year and a year is all of the statements they will let me see and are unwilling to refund any money and we have been lied to 4 different times from customer service.
FTC Staff

You can report that to the FTC at www.FTC.gov/Complaint and to your state Attorney General. The information you give the FTC goes into a secure database that the FTC and other law enforcement agencies use for investigations.

Jeffrey McCarty
I have recordings of Direct t.v telling me lie after lie. By far, the most deceiving company ive ever dealt with.
JimmyZ
We have had a DirecTV account for about 24 years and paid our bill faithfully. We live in rural area and were able to get fiber drop from local phone company this summer. We decided to use local provider for access to TV. When we canceled our account with DirecTV they sent us a bill for over $400.00, and said we had to send back the receiver. We had just got a new receiver and paid over $100.00 to get it. The old receiver had quit working. We were told that in order to get the new receiver we had to sign a 2 year contract. We never signed anything, just told person on other end of phone that could not speak English that the receiver was broke and needed a new one to watch TV. Had no idea we had renewed a contract. Moral of the story is we paid DirecTV for about 25 years every month and when we left they shafted us. You could not Jget us to every use DirecTV again in this lifetime. Ungrateful large company that does not care anything about its long time customers, just care about getting new customers.
Deborah Meekins

In reply to We have had a DirecTV account by JimmyZ

We just found out same thing. We just cancelled (after many years of having)...moved and have now had here for more than 2 yrs ( had signed another 2yr agreement when moved which has been met);, but asked them last October to add another box(that we already had) and evidently they then added another 2 yrs to our contract without us knowing it until now...and they say we owe $170...pathetic!!! Will NEVER use them again!!!
Jamison Cook
They told me I would receive a $300 gift card in the mail for signing up and then never sent nothing but $100. And then I cancel and they wanna charge me $374.00
Chuck
Direct charge me 160 dollars for caneling my service missing cutoff date by one day
Guest
I am a victim of Direct tv fraud. I gave my auto pay information to them, they were charging me too much money. So every time I called in, they opened another account and charged me again. To the tune of $750.00 in 5 months. I should have paid $57.00 per month. for a total of $ 285.00. Senior citizens don't have a chance. The only way that I stopped it was to cancel my card and they got very upset. We have been all the way in the company to the checks in the mail. but surprisingly enough it has never come.. Many hours on the phone periodicly for over a year. i have reported this to better business bureau. and others. No response. Now they are charging me for the NFL package that I canceled WE DON'T WATCH FOOTBALL. We declined it when they gave it to us free. I'm so busy working overtime to pay all these scammers I don't have time to watch TV.
FTC Staff

You can report that to the FTC at www.FTC.gov/Complaint. The information you give goes into a secure database that the FTC and other law enforcement agencies use for investigations.

The comments you put here on the blog don't go into the secure database.

Guest
Yes I am having same problem trying to cancel the 90 day free hbo, showtime stars package about $54 monthly. They will not allow it to be done on line but you can add any packag but not delete a real scam! Marvin Taylor
Guest
I closed my DTV account in 2014 with a balance of $0.00. Today on my credit report it states I have a negative report. I called them and they are stating that was for a fight in 2010. Beware of this company. There is no corporate number besides the P.O. Box #. Save your bills.
Guest
Because of this I have bad credit history. My bill was $70 and went up to $248 its insanity. They didn't even give me the option to pay in installments. So I gave them their equipment back and left.
Guest
This is executive robbery. Most cable companies and electric companies embark in this type of underhanded practice. I recently experienced this with Direct Tv myself. My bill went from 113.00 a month to 143.90 a month, with no explanation of why. When I inquired, the person on the other end could not substantiate the additional charges. It’s pathetic to think that this is allowed in any way, shape or form. They deserve to be sued for taking advantage of consumers.
Guest
I disconnected 2-13 & had dish installed because the 2nd year my bill doubled. They put the disconnect in for the 3-3 which is the billing date. How is it legal for them to keep 2 weeks of service pay when it has been fiscally disconnected? I told them it should be prorated which is what most companies do and they said they don't!!!