The Federal Trade Commission was created on September 26, 1914, when President Woodrow Wilson signed the Federal Trade Commission Act into law. The FTC opened its doors on March 16, 1915. Our mission is to protect consumers and promote competition. We celebrated our 100th anniversary in 2015 by reflecting on our unique mission, significant events in Commission history, and its staff, stakeholders and constituents – present and past. On January 12, 2015, President Barack Obama visited the Commission, the first presidential visit to the Commission since 1937.

A Bibliography of FTC History

To commemorate the 100th anniversary of the Commission, a special bibliography was created to compile important public sources on the FTC’s history.

The FTC established its headquarters at 600 Pennsylvania Avenue, N.W., with President Franklin D. Roosevelt laying the cornerstone himself. 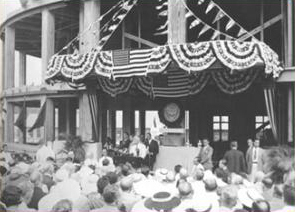 Roosevelt remarked, “May this permanent home of the Federal Trade Commission stand for all time as a symbol of the purpose of the government to insist on a greater application of the golden rule to conduct the corporation and business enterprises in their relationship to the body politic.” Listen to FDR’s speech.

The building which is particularly known for its two art deco style statues, called “ Man Controlling Trade,” is located at the apex of the Federal Triangle, and was the culmination of the massive Depression-era government building project.  Commissioners and staff officially moved in on April 21, 1938, and the building continues to function as the FTC’s headquarters, serving the agency’s adjudicative, executive, policy, and administrative functions.

Our Predecessor: The Bureau of Corporations

Under legislation sought by President Theodore Roosevelt, the FTC's predecessor, the Bureau of Corporations, was created on February 14, 1903. To commemorate the 100th anniversary of that event, the Bureau of Economics held a roundtable on September 4, 2003. More information about the roundtable, including a transcript, is available.