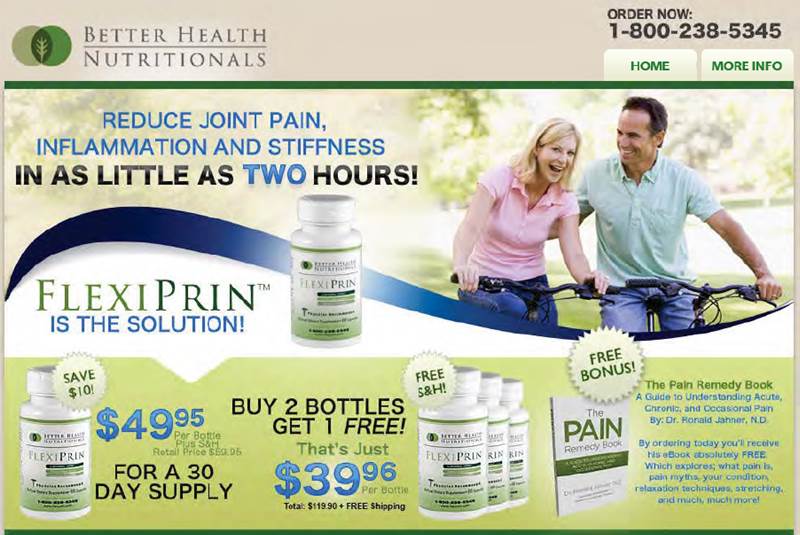 The FTC and the Maine Attorney General announced settlements with six defendants and complaints against three others involved in the marketing of FlexiPrin, a purported pain remedy, and CogniPrin, a product advertised to improve memory and reduce mental decline.

The FlexiPrin defendants promised that the tablets – which contained (among other things) extracts of hops, rooster comb, turmeric, ginger, and black pepper – would “reduce joint pain, inflammation and stiffness in as little as two hours.” Defendant Ronald Jahner, a naturopathic physician who endorsed the product, claimed “In almost every case, within two hours to two days, you’re going to get relief from the acute pain. . . . Then you get the ingredients that the body uses to actually rebuild not only the joint, but the bone and also the synovial fluid.”

Ads for CogniPrin targeted people who “have been dealing with memory issues, forgetfulness, brain fog.” A purported “brain scientist” identified as Samuel Brant – in fact, he was really defendant Brazos Minshew – offered a glowing endorsement: “CogniPrin is backed by research that proves it works. The support includes more than 64 worldwide clinical studies and more than 2,800 research papers documenting the effectiveness and safety of this brain-boosting memory-protecting nutrient.” Another ad featured FlexiPrin endorser Ronald Jahner offering his evaluation: “Thanks to a breakthrough in the nutritional world, we can now all safely and easily roll back mental decline by as much as 12 years. This means we can improve our memory by 44 percent right now.”

The FTC and Maine AG allege that a host of health claims for the two products were unsubstantiated or flat-out false, but that’s just the beginning of the illegal conduct charged in the complaint. Here are some additional examples:

Endorsements.  The lawsuit alleges that Brazos Minshew – a/k/a brain scientist Samuel Brant – isn’t an expert in neurology or brain science. In addition, the FTC and AG allege that the ads portrayed Jahner’s opinions as objective and independent, when in fact he was getting a royalty for every bottle sold. The complaint also alleges that consumer testimonials in the ads were made up.

Format.  FlexiPrin was marketed through 30-minute radio programs that claimed to feature “cutting edge health and wellness news.” The CogniPrin defendants used a similar radio format.  But according to the FTC and the AG, they were paid ads and not objective news or informational programming.

Risk-free, money-back guarantees.  Consumers were told they could try the products “risk-free,” but the FTC and AG allege the defendants hoisted undisclosed hoops consumers had to jump through, including mailing back empty bottles and paying pricey shipping fees.

Free trial offers.  The defendants claimed to offer consumers a risk-free trial of the product.  We’ll say this much about it: Many consumers did indeed find it to be a trial. According to the complaint, when consumers called customer service to cancel toward the end of the trial period, they learned that the defendants had started the clock when the person placed the order, not when they received it.

Continuity plans.  When consumers took advantage of those “free trials” for FlexiPrin or CogniPrin, the defendants signed them up to receive additional automatic shipments. But according to the complaint, that was done without clear disclosures and without consumers’ express consent – meaning that the defendants’ placed charges on consumers’ credit or debit cards without their authorization, in violation of the Telemarketing Sales Rule, the FTC Act, the Electronic Fund Transfer Act, Reg E and Maine law.

Upsells.  When consumers called to get FlexiPrin or CogniPrin, the defendants’ marketing efforts switched into high gear. They pitched upsells for items like buying clubs and health savings programs sold by third parties. According to the complaint, those, too, included misleading conditions, deceptive trial periods, and poorly disclosed negative options that resulted in more unauthorized charges on buyers’ credit cards for stuff they didn’t want.

Defendants XXL Impressions, Jeffrey R. Powlowsky, J2 Response, Justin Bumann, Justin Steinle, and Brazos Minshew settled the charges against them. The proposed orders include broad injunctive provisions and impose a $6.57 million judgment against defendants, which will be partially suspended based on their financial conditions. The complaint against Fusco, Jahner, and Synergixx is pending in federal court in Maine.

What’s the case mean for other businesses? Litigation continues, but the announced settlements reflect the FTCs long-standing concern about unsubstantiated health claims, deceptive “free” offers, misleading automatic shipments, and unauthorized credit card charges. Furthermore, consumer-facing companies aren’t the only ones with an obligation to comply with the law. In naming multiple parties involved with the marketing of FlexiPrin and CogniPrin – including individuals and corporations who played significant behind-the-scenes roles – the FTC focused on the facts to determine who was drafting, reviewing, or approving ads, telemarketing scripts, and other promotions that caused substantial harm to consumers.