Everyone wants to save money at the pump. And no one wants to cut fuel costs more than companies – including many small businesses – that are in the trucking industry or have company cars. The FTC just filed a complaint alleging that Georgia-based FleetCor Technologies has made misleading representations in pitching its “Fuelman” and co-branded fuel cards to businesses around the country. According to the complaint, FleetCor hasn’t lived up to its marketing promises and has charged customers unexpected fees that to date total hundreds of millions of dollars. 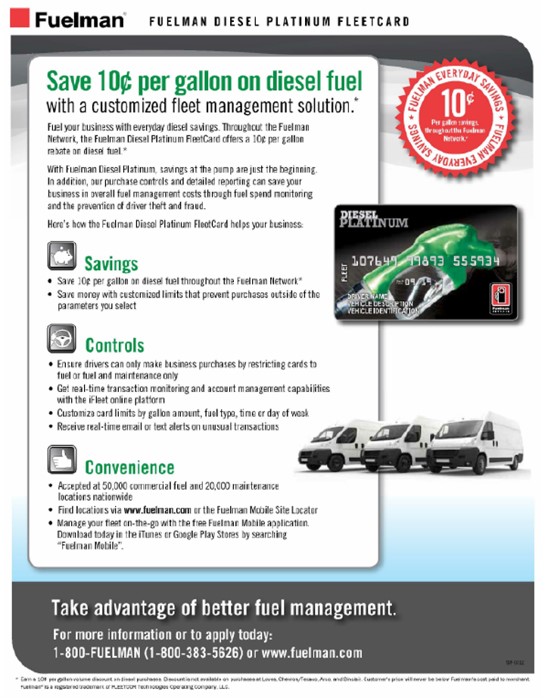 The lawsuit, which names FleetCor and CEO Ronald Clarke, alleges that despite the defendants’ claim that businesses using its fuel cards would achieve specific per-gallon savings – for example, “Save 10¢ per gallon on diesel fuel with a customized fleet management solution.*” – FleetCor’s own data show that these customers have saved, on average, less than a penny per gallon even before taking into account FleetCor’s hefty unexpected fees.

About those fees: The defendants have promised “[n]o set-up, transaction or annual fees,” but according to the FTC, the defendants have charged customers millions in a broad array of unexpected fees. For example, some ads said that customers could enjoy the “convenience” of filling up at tens of thousands of locations nationwide. However, when customers buy fuel at a number of national retailers, including Pilot, Texaco, Chevron, and Loves, they’re in for a surprise. First, FleetCor doesn’t honor promised discounts at those large chains. And second, FleetCor imposes a transaction fee of $2.00 or more for each fill-up at those locations. FleetCor considers those retailers to be part of its “Convenience Network,” but according to the FTC, that term really means a non-preferred or out-of-network station where FleetCor customers have to pay more.

The FTC says the defendants also bill customers for an array of other unexpected fees, including Account Administration Fees, Program Fees, High Credit Risk Account Fees, and Minimum Program Administration Fees. To the extent that FleetCor has mentioned some of those fees, the FTC says it’s in dense blocks of fine print in hard-to-read and hard-to-understand Terms and Conditions documents. Other fees, including fees for unwanted subscription programs, aren’t mentioned even there. In addition, the complaint alleges the defendants have charged some customers “Late Fees and Interest and Finance Charges” totaling hundreds or thousands of dollars in a single billing cycle even when a customer paid on time.

Here’s an example of how just one of those fees works. Buried in the fine print is the fact that FleetCor charges certain customers fees if FleetCor deemed them to be “High Credit Risk Accounts.” Who has fallen within FleetCor’s definition? Customers with a lower credit score, customers who have paid late, and customers who “operate[] in the trucking or transportation industry.” You read that right. According to the FTC, the defendants pitch fuel cards to members of that industry and yet have allegedly soaked them for at least $1.7 million in High Credit Risk Account fees solely because they’re part of FleetCor’s target market. Factoring in other customers, FleetCor has allegedly taken in a total of more than $108 million in High Credit Risk Account fees alone.

What’s more, the FTC alleges that when customers complain to FleetCor and are successful in getting one fee removed, in many instances, the defendants simply have swapped it out for a different unexpected fee. You’ll want to read the lawsuit for more allegations about how the defendants’ billing practices have cost customers hundreds of millions of dollars – conduct that has led tens of thousands of people to complain to the company, government agencies, and the BBB. The FTC also cites in-house documents to illustrate the defendants’ failure to take action in response to what the defendants describe as “noise,” a derogatory term some highly-placed corporate officials have used to describe complaints and concerns voiced by FleetCor’s customers.

The case is pending in federal court in Georgia.

Small General …
That is why our small company cancelled our account and switched to BP Fuel cards, but BP started doing the same thing. We no longer use their card either.
Anon

BP Small Business Fuel Cards are managed by FleetCor so it's almost a sure thing that you were with the same company when you switched cards.