Operation Call it Quits: There’s no quit in our fight against illegal robocalls

Hate illegal robocalls? You’re not alone. The FTC hates them, too, as do state Attorneys General and pretty much anyone with a phone. The FTC and state and federal partners teamed up today to announce Operation Call it Quits, the latest salvo in the ongoing fight against robocalls and other illegal telemarketing. We also have tips on how you can help hang up on what many people consider to be Consumer Protection Enemy #1. 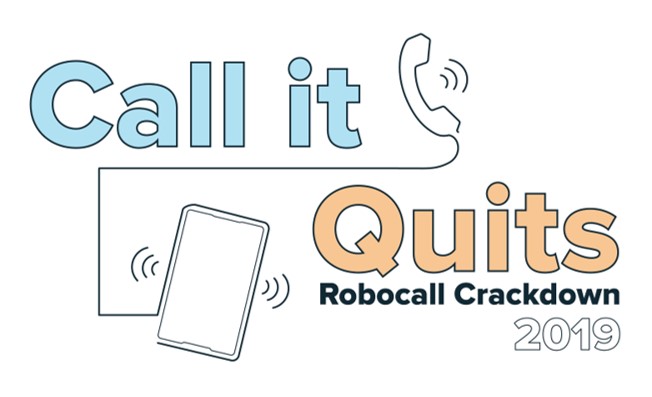 First, some background on the battle. Whether it was a friendly call that a prescription was ready or a flight was delayed, robocalls had an innocent start. But soon enough, con artists weaponized them. When the robocall plague began, the FTC moved quickly to amend the Telemarketing Sales Rule to ban robocall sales pitches unless companies have consumers’ express written permission to call. That means if you get a robocall trying to sell you something, the people who call you – and the people who hired them – are violating the law. Furthermore, the vast majority of those calls are fronting for fraudsters, which is no surprise. If a company breaks the law to contact you, what are the chances they’re pitching anything legit? Not likely.

Add Operation Call it Quits to the totals and so far the FTC has brought 145 cases against 479 companies and 387 individuals responsible for illegal calls. The states have filed many actions, too. And yet we continue to get 10,000 complaints every day about unwanted calls. Why? Because robocallers are a brazen bunch. In it for a fast buck, they know what they’re doing is illegal and yet they persist.

But they’re not the only persistent ones. The FTC’s contribution to Operation Call it Quits includes four new cases against 22 individuals and corporations and court orders in three pending actions. Here’s the low-down on the operators the FTC says inundated consumers with illegal calls.

The FTC also announced settlements in three pending actions. The FTC and Florida AG filed suit in 2015 against Lifewatch, a Lynbrook, New York, outfit that falsely told older consumers they could claim a “free” medical alert system bought for them by a family member or medical professional. The defendants used pre-recorded messages designed to sound like a real person was on the line and falsely claimed their products were endorsed by groups like the American Heart Association or AARP. Among other things, the court order bans certain defendants for life from telemarketing and imposes total judgments of $25.2 million, which will be partially suspended upon the payment of $2 million. The order also requires them to notify all current customers about the case and give them the opportunity to cancel their service.

In addition, the FTC announced a settlement with one defendant in its 2018 lawsuit against Redwood Scientific, which used robocalls to deceptively market dissolvable strips of film touted for smoking cessation, weight loss, and sexual performance. The complaint also alleged the defendants enrolled consumers in auto-shipment programs without their permission. In addition to other provisions, the settlement permanently bans Danielle Cadiz, the company’s former Director of Operations, from robocalling, including the use of ringless voicemails. The $18.2 million judgment against her will be suspended based on her inability to pay.

A court order in another action – the FTC and Florida AG’s 2016 lawsuit against Florida-based Life Management Services – bans 17 people for life from telemarketing. The defendants bombarded consumers with illegal robocalls for bogus credit card interest rate reduction services. The settlement imposes a judgment of $23.1 million, which will be suspended when they turn over virtually all of their assets. The FTC and AG won summary judgment and monetary relief against ringleader Kevin Guice in December 2018.

Those cases make up only one part of Operation Call it Quits. Twenty-five federal, state, and local law enforcement partners have brought another 87 enforcement actions. Five of them are criminal cases brought by U.S. Attorney's Offices and TIGTA, Treasury Inspector General for Tax Administration.

Law enforcement will continue to be a key component in the fight against illegal calls, but technology may be part of the solution, too. That’s why we’re working with industry to help innovate an end to illegal robocalls. So far we’ve sponsored four public challenges to promote the development of call-blocking tools. We’ve gone from a handful of products on the market to hundreds, including two of our contest winners. And starting in August 2017, we began the daily public release of Caller ID numbers identified in Do Not Call complaints so apps and telecom carriers can use the information to block unwanted calls. Another development on the horizon: a new system to help combat spoofing and restore confidence in the Caller ID system – an industry effort the FTC supports.

Of course, illegal calls have a human cost, too. A recent report recounted the potentially life-threatening impact robocalls are having on hospital phone lines. And businesses tell us that staff time and resources are wasted by intrusive calls. That’s why a total of 45 federal, state, and local partners are spreading the word from coast to coast about three key steps consumers can take to help reduce unwanted calls: Hang up. Block. Report.

The FTC has new multimedia resources, including videos and shareable graphics, with tips on battling back against unwanted calls. And if it’s time to double-check your own company’s telemarketing efforts, read the Complying with the Telemarketing Sales Rule.

These fines are being settled for pennies on the dollar. Make them like student loans, not cancelled via bankruptcy. Also make them serve some jail time.

Better yet, Jake, the court orders them to pay victims' student loan debts! Ha Ha. That would be fantastic and a win-win for both sides. #YouInterruptedMyStudyTime #YouPayMyLoanOff

There is no mention above about Robocalls I get on my cell phone in either an Asian Language or Spanish. How have you addressed that issue? Plus, we never answer our home line anymore because this is where most of these horrendous calls come in. I can't even watch a TV show without that phone ringing once. My answering machine picks up everything, and these robocalls I think, are designed to know when there is an answering machine, so when I go to erase the average 10 calls I get per day, it's nothing. What I am afraid of is that I will continue to get more of these annoying calls on my cell. I have blocked most of them.

What about calls from charities? Are they allowed to be using robocalls? Thanks!

What about charities? Are they allowed to be making robocalls? If yes, can you make it illegal?

I agree that charities should not be allowed to call numbers on the do not call list, or to make robocalls. We turned off our answering machine simply because 99% of the calls recorded were either scams or charities. It became a nuisance just to erase all the messages. Please make those calls illegal!

So? How much has the FCC collected from the fines/damages awarded?

Is this really working? Or, this is just another Do-No-Call 'useless' government lie. I assume the robo-calls will not stop, they will bribe them and go around, there will be no consequence at all. Don't be fooled, it is not going to work.

As long as the FTC is merely slapping these robocalling scammers on the wrist like cowards, the robocalls will continue. For the most part, after all of these illegal calls, they get let off the hook with nothing more than a scolding. What would be handy is if spoofing was addressed so that us humans could know who these scammers are and file charges against them. As long as the FTC is on the case, I guess I'll leave my phone in airplane mode.

The advice is great for the average consumer, but what about citizens with compromised mental faculties? My grandmother lives at home, and these villains call her relentlessly. She has mild dementia and is easily confused and these people prey on that. She deserves a phone to talk to family and friends and to get help, and blocking these numbers is pointless as so many call each and every day all day. There is no easy solution besides shutting them down with actual consequences that stick.

Let's not kid ourselves: The government hasn't made a dent -- not a nick -- in this fight. The question isn't whether the FTC is impotent, but why? Lack of resources? Initiative? International jurisdiction? There's no reason to believe the situation is going to get better with a new "Operation Sunshine and Rainbows." This is a failure, folks. The hits will keep on coming.

How a robocall works, simple you fill out info phone number, email on the web site, heck even if your arrested, that info is provided by the police agency. ALL mention sells that info for a small price! My suggestion is do not give arresting agency anything other then your name!!!!!!

I greatly appreciate the stance taken against RoboCalls.
Some have found a way around this already, VIA Text Messages. I receive less calls but more text messages.