When the FTC warns consumers about government imposter scams, we’re usually referring to bogus calls that falsely claim to come from the IRS or some other official office. But as a case just announced by the FTC demonstrates, that’s not the only kind of false government affiliation that can deceive consumers. A $2.2 million settlement with American Immigration Center reminds other businesses of the dangers of conveying a misleading connection to a government agency.

When consumers wanted to renew their green cards or apply for naturalization, where did they go? Online, of course, where they input terms like “USCIS,” “INS,” or “US Immigration” to search for the proper government site. According to the FTC, that’s how they ran across results with tag lines like “USCIS Forms – Easy Online Forms for Green Card & Citizenship.” 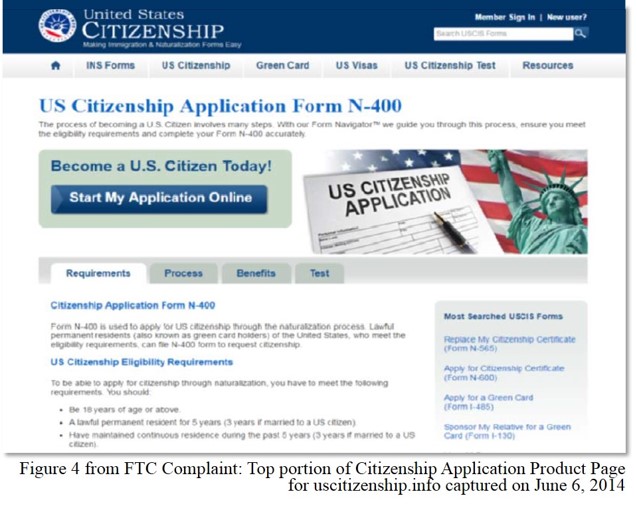 A click took them to sites with the outward appearance of official government webpages. First, there were the URLs – usimmigration.us, uscitizenship.info, etc. Then there was the red, white, and blue color scheme, the Statue of Liberty, passports, and pictures of then-President Obama. What’s more, people looking for, say, Green Card Renewal Form I-90, saw links with the exact name of the relevant document. According to the FTC, people paid between $120 to $300 and input a substantial amount of personal information, all under the impression they were filing documents directly with a government agency.

Except that they weren’t. Despite the appearance of those pages, consumers were actually on one of many commercial sites the defendants used to sell their “software wizard” to fill out government immigration forms. And the money consumers paid didn’t go toward government filing fees. It went straight into the defendants’ pockets.

In addition to the $2.2 million judgment, the defendants have agreed to clearly disclose that: 1) their sites aren’t affiliated with the government; 2) people must separately file immigration applications with the appropriate government agency; and 3) people must separately pay applicable filing fees to the government. The proposed order also bars the defendants – principal Cesare Alessandrini and Forms Direct, Inc., doing business as American Immigration Center – from stating or implying any affiliation with the government.

What’s the message for other companies?

Avoid an affiliation conflation. Look at your ads and websites from the point of view of your target audience. Could prospective customers be left with the misimpression that your company has an affiliation with a government agency? Steer clear of any purported connection to a local, state, or federal government office.

Consider the big picture. The complaint in this case cited the words the defendants used to convey claims to consumers, as well as what their websites looked like. That’s because, according to the FTC Deception Policy Statement, “The Commission will evaluate the entire advertisement, transaction, or course of dealing in determining how reasonable consumers are likely to respond.” That specifically includes visual imagery and the omission of material information. Wise companies bear in mind the FTC’s long-established “net impression” standard and exercise caution in drafting their copy, selecting graphics, and choosing what they say – and what they don’t say – to consumers.

Another fantastic job by the gentlemen and ladies of the FTC.

I feel like I just got scammed. They are still getting away with deception advertising and taking money for FREE forms~