It’s a fetching frock with spaghetti straps, an engineered paisley print, and an asymmetrical hemline. And it’s at the center of a law enforcement action against department store chain Lord & Taylor for its allegedly deceptive use of native advertising – the first case of its kind since the FTC released its Enforcement Policy Statement in December. The lawsuit also challenges Lord & Taylor’s “product bomb” campaign on Instagram as misleading. 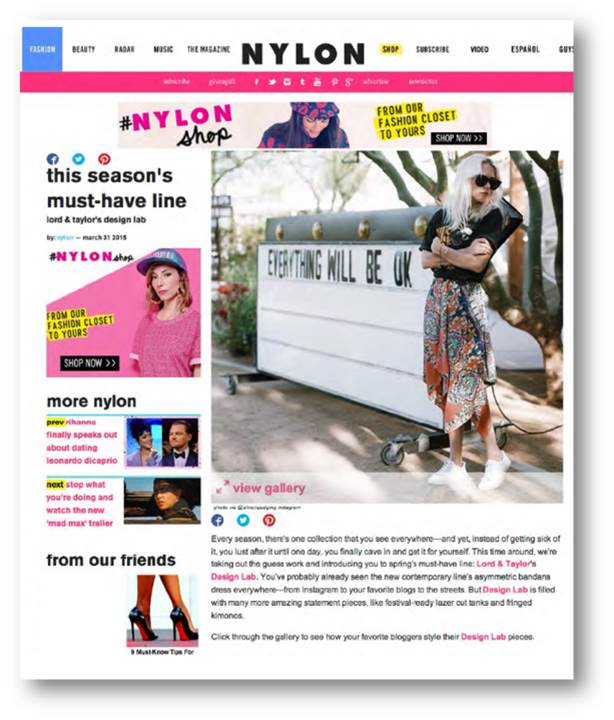 Lord & Taylor used an extensive social media push to launch Design Lab, its own apparel line aimed at women between 18 and 35. The strategy was interesting: Focus on just one item – that paisley asymmetrical dress.

For the native advertising part of the campaign, Lord & Taylor signed a contract to have Nylon, an online fashion magazine, run an article about the Design Lab collection featuring a photo of the paisley dress. Lord & Taylor reviewed and approved the paid-for Nylon article, but didn’t require a disclosure about their commercial arrangement.

In addition, Lord & Taylor contracted to have Nylon post a photo of the paisley dress on Nylon’s Instagram page. Again, Lord & Taylor reviewed and approved the paid-for post, but didn’t require a disclosure.

That was only part of the campaign. Lord & Taylor also recruited a team of fashion influencers, all of whom had two things in common: a sense of style and a massive number of followers on social media platforms.

Lord & Taylor gave the dress to 50 influencers and paid them between $1,000 and $4,000 to post photos of themselves in the dress on Instagram on one specified “product bomb” weekend in March 2015 – the same weekend when Nylon posted its Lord & Taylor-approved photo. Style the dress any way you like, Lord & Taylor told the influencers, but in other aspects, the contract was all business. The influencers had to: 1) use the @lordandtaylor Instagram user designation and the campaign hashtag #DesignLab in the photo caption; and 2) tag the photo @lordandtaylor.

Lord & Taylor’s reps preapproved each of the influencers’ Instagram posts to make sure they included the required hashtag and Instagram designation. The company also edited some of what the influencers planned to say. 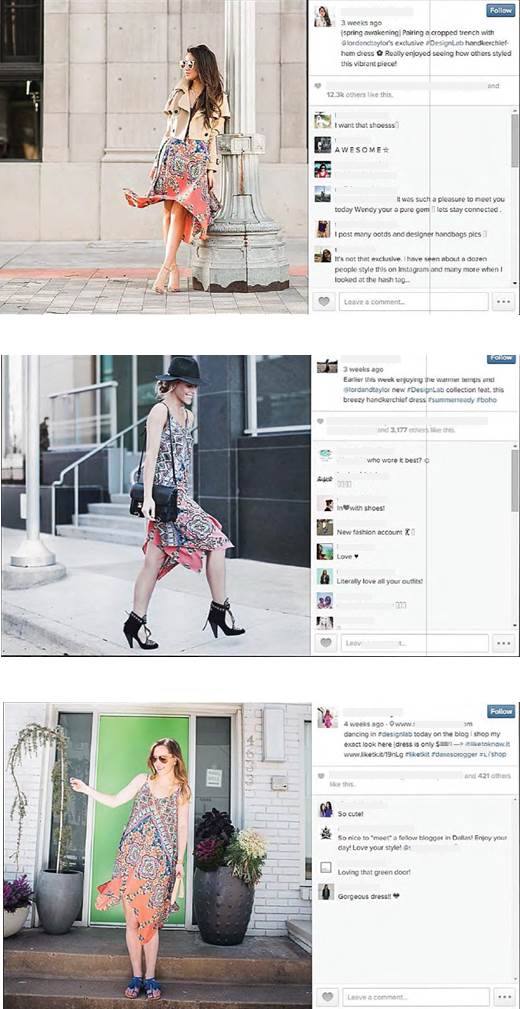 Under the terms of the proposed settlement, Lord & Taylor can’t falsely claim – expressly or by implication – that an endorser is an independent user or ordinary consumer. If there is a material connection between the company and an endorser, Lord & Taylor must clearly disclose it “in close proximity” to the claim.  And Lord & Taylor can’t suggest or imply that a paid ad is a statement or opinion from an independent or objective publisher or source. You can file an online comment about the proposed settlement by the April 14, 2016.

What does the Lord & Taylor case suggest for your company’s social media campaigns?

If you use native advertising, consider the context.  As the FTC explained in Native Advertising: A Guide for Businesses, “The watchword is transparency. An advertisement or promotional message shouldn’t suggest or imply to consumers that it’s anything other than an ad.” Review your native ads from the perspective of consumers who don’t have your industry expertise about new forms of promotion.

If there is a material connection between your company and an endorser, disclose it. What’s a material connection?  According to the FTC’s Endorsement Guides, it’s a connection between the endorser and the seller that might materially affect the weight or credibility a consumer gives the endorsement. Read The FTC’s Endorsement Guides: What People Are Asking for nuts-and-bolts compliance advice and apply those principles if you enlist influencers, bloggers, or others in your marketing efforts.

Disclosures of material connection must be clear and conspicuous.  What about explaining a material connection in a footnote, behind an obscure hyperlink, or in a general ABOUT ME or INFORMATION page? No, no, and no. As with any disclosure of material information, businesses should put the disclosure in a location where consumers will see it and read it. The terms of the Lord & Taylor settlement apply just to that company, of course, but for prudent marketers, a good rule of thumb is the standard in that order:  “in close proximity” to the claim.

Train your affiliates and monitor what they’re doing on your behalf.  If your company uses social media campaigns like this, make your expectations clear at the outset with influencers and follow through with an effective compliance program. There’s no one-size-fits-all approach, but The FTC’s Endorsement Guides: What People Are Asking lists elements every program should include:

lord and taylor is bad

L&T is getting away with a tiny slap on the wrest. Where is the fine that strips them from ALL the sale proceedings of these dresses?
Did L&T buy or bribe their way to get away with this?
All what they've agreed to in this settlement is already the law and FTC's rules.
I don't see the point of wasting taxpayers' money for nothing other than for someone to see OK I'll abide and play by the rules, instead of paying dearly for breaking these rules.
I'm not happy with such settlement.

Super-Duper blogs! I love it really!! . Thanks For Sharing This Useful Information .Would come back to visit soon, again Thanks.

Nice post, Native advertising is a type of advertising, usually online but feasibly elsewhere, that matches the form and function of the platform upon which it appears. Despite the ambiguity surrounding native advertising's invention, many experts do consider the Hallmark Hall of Fame, a series which first aired in 1951 and still runs today, as among the earliest instances of the technique. According to Lin Grensing-Pophal, "The award-winning series is arguably one of the earliest examples of 'native' advertising—advertising that is secondary to the message being delivered, but impactful through its association with valued content. I have researched various articles you can view this link for more detailed information [URL deleted]

Nice article related to native Advertising, it gives effective examples to help people to implement in the field of Marketing and Sales. I also want to share more ideas about going native in . For much of their existence, at least from the news/editorial camp, native ads have been the harbinger of the breach in the ever-threatened levy between editorial and advertising. In addition, they were met with a fair degree of criticism for their deceptive nature. [URL deleted]

Why didn't they out these BS "influencers"?? THEY are just as guilty.

There are several companies/brands who still do similar. see REVOLE campaign. And Lord and Taylor is still using influencers without any disclosure, so what was the point. The FTC did not change anything, i.e, change any social media business practices.