Silence may be golden, but not for the parents of kids with speech disorders. Illinois-based NourishLife marketed two dietary supplements, Speak and Speak Smooth, advertised as the answer for kids with a broad range of speech disorders, including those associated with autism. But the FTC says the company’s claims were long on talk and short on scientific substantiation.

According to the FTC, NourishLife and owner Mark Nottoli claimed their products would cause or help cause children to develop normal speech and language capacity. Even kids with autism spectrum disorders or apraxia (a condition where the brain has difficulty coordinating the movements required to form words) were likely to experience dramatic improvements in speech and behavior, saidthe company. What’s more, NourishLife told consumers that Speak was clinically proven to work. 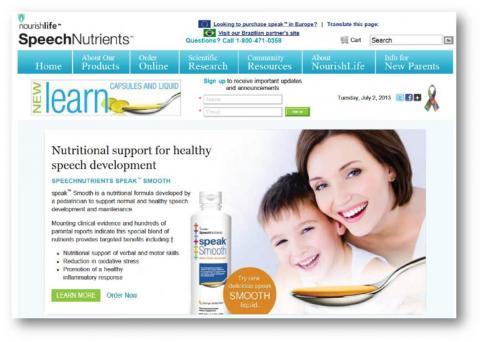 Another way the company conveyed its claims was through dramatic testimonials from parents. Here’s just one example: “Speak vitamins have made my little boy talk.  He is five years old and has not spoken until I began giving him the vitamins. It took two days of giving them to him to hear him speak. I don’t mean just a random word every now and then. I mean he now speaks in complete sentences.” Another parent claimed that a child who had been unable to converse “looked me in the eye [and] initiated a conversation” just two hours after trying Speak. In addition, NourishLife’s site prominently featured a blog post touting its product by a person identified as the Chairman of the nonprofit Autism Hope Network.

The defendants sold Speak – capsules and liquids containing Omega-3, Omega-6, and Vitamins E and K – on their own site and through a network of distributors. They cast a wide marketing net, using (among other things) search engine and display ads, direct mail, Facebook, Twitter, and corporate sponsorships at conferences on autism.

They also promoted Speak through a purported apraxia research website. The site appeared to provide research and other scientific information about the treatment of apraxia, including the health benefits of a “patented omega3/vitamin E speech supplement.”  The site also solicited participation in an ongoing “Study Group” to investigate the product.  Participating parents got free supplies of the supplement.

What was really going on? According the complaint, many of those dramatic testimonials came from parents who were given the product for free. And that apraxia research site?  It was owned and run by NourishLife.

The lawsuit alleges that the defendants made a host of false and deceptive claims, including that their products were clinically proven to work. The FTC also says NourishLife falsely represented that the apraxia research website was an independent, objective resource for scientific information on treatments for apraxia. An additional count of the complaint charges that the defendants failed to disclose their connection to the research site and failed to disclose that many of the parents and other endorsers of Speak were compensated in connection with their endorsements.

The settlement in the case puts procedures in place to protect consumers in the future.  After the defendants turn over $200,000, the rest of the $3.68 million judgment will be suspended, based on their inability to pay.

NourishLife used a variety of marketing methods to tout its products.  A closer look at the FTC’s allegations offers insights for other companies.

Testing testimonials.  Under the FTC’s Endorsement Guides, material connections between advertisers and endorsers must be clearly and conspicuously disclosed. It just makes sense, doesn’t it?  If endorsers are getting something free – products, for instance – that may affect how consumers evaluate their endorsements. Furthermore, even when endorsers aren’t compensated in any way, advertisers still need to substantiate the underlying efficacy claims conveyed by those testimonials. For nuts-and-bolts guidance, read The FTC’s Revised Endorsement Guides: What People are Asking.

Declaration of independence.  With so much health information – and misinformation – available online, the source of the data may be important to consumers. According to the FTC, NourishLife misrepresented the apraxia research site as independent and failed to disclose the company’s connection to it. The message for marketers:  It’s unwise to convey expressly or by implication that a site promoting your product is independent if that’s not the case.

May we have a word?  Words are at the center of every advertising campaign, but one of NourishLife’s many marketing methods was the use of Google AdWords. If consumers entered terms like “autism treatment,” “toddler speech problems,” or “3 year old not talking” into the search engine, a sponsored link for Speak appeared above the regular search results or on the right.  Lots of advertisers buy key words to trigger sponsored links on search engines.  Just be aware that those terms may be relevant in evaluating the net impression your campaign conveys to consumers.

Ways and means.  In addition to challenging claims NourishLife made on its own, the complaint alleges the defendants gave other companies promotional materials for Speak that allowed them to deceive consumers, too. More companies are experimenting with various distributor, reseller, and affiliate arrangements.  Just remember that you’re still responsible for complying with truth-in-advertising standards when using these methods.

Wow! Seems like a magic formula. They should not advertise if they cannot back it up with scientific results!