“Oh, my achin’ . . . .” It’s a common refrain for many older Americans and others who experience chronic pain. Some businesses respond with ads heavy on puffed-up promises, but light on the scientific evidence necessary to support serious health claims. That’s the FTC’s allegation against a company that sold a pill called Isoprex. The complaint also challenges the undisclosed use of compensated friends and family as purported consumer endorsers. 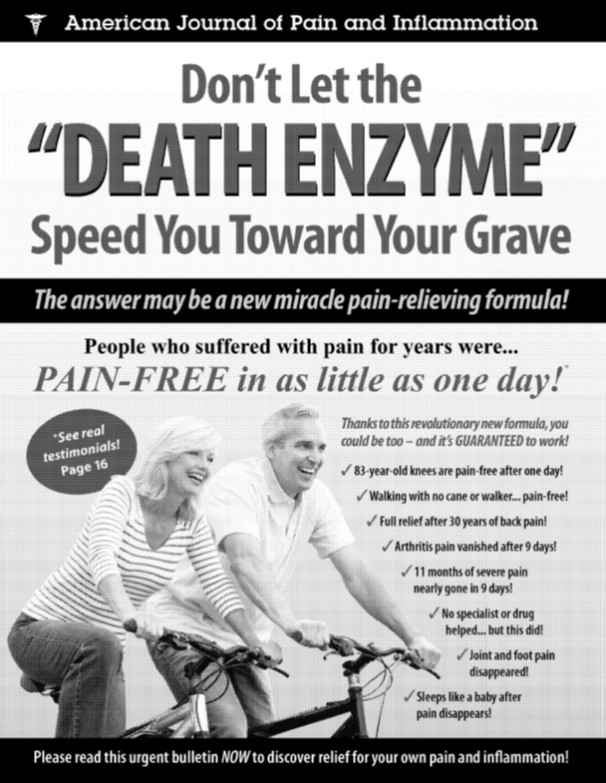 “Don’t Let the ‘DEATH ENZYME’ Speed You Toward Your Grave.” No one could accuse Boca Raton-based Renaissance Health Publishing of using the soft sell approach. Invoking the name of something called the American Journal of Pain and Inflammation, the direct mail brochure claimed that by using Isoprex, “People who suffered with pain for years were PAIN-FREE in as little as one day!” Other ads featured a laboratory professional next to a graph that purported to show the results of clinical testing of the supposed active ingredient in Isoprex. According to a handwritten notation, “Wow! Severe painful knee swelling disappears. 100% effective!”

Ads also used photos of active consumers of a certain age enjoying tennis, golf, and biking. Then there were glowing endorsement by “Geoff,” “Christy,” “John A.,” and others attesting to the effectiveness of Isoprex.

But according to the FTC, the company’s claims about relieving pain, reducing inflammation, and rebuilding joints were false or unsubstantiated, as were their promises that Isoprex provides relief comparable or superior to over-the-counter drugs and is 100% effective at relieving inflammation and swelling. What about the defendants’ representations that Isoprex had been clinically proven to provide a host of medical benefits? Not true, says the FTC.

The ads also didn’t disclose that “Geoff” had been paid to write copy for the defendants, “Christy” worked for the company, and “John A.” was a relative of another employee. The FTC alleges those were material connections the defendants should have clearly disclosed.

Among other things, the proposed settlement requires Renaissance Health Publishing and managing member James DiGeorgia to have human clinical testing to support a wide range of health claims. Unexpected material connections to endorsers will have to be clearly disclosed, too. Based on the defendants’ financial condition, the $3.9 million judgment will be suspended upon the payment of $100,000. The proposed order also requires the defendants to send a letter to customers describing the FTC’s lawsuit.

We’ve said it before and cases like this prove we mean it. The FTC will take action against companies that peddle unproven health product to older consumers.

Facing the facts about fraud: It may not be the face you think

Health app developers: Updated interactive tool can help you get started on compliance