Is there a family or a workplace that hasn’t been touched in some way by the public health crisis of opiate addiction? It’s no wonder that advertisers are offering purported treatments. But an FTC settlement with a Texas-based business stands for the fundamental principle that companies’ health claims need the support of sound science.

The products at issue were Withdrawal Ease and Recovery Ease – and the names were the first of many representations that Catlin Enterprises made about what it pitched as “The Leader in Home Opiate Detox Since 2009.” Withdrawal Ease and Recovery Ease included daytime formulations of vitamins, minerals, and herbs. The nighttime versions had different herbal blends minus the vitamins and minerals. Among the ingredients were passionflower, milk thistle, turmeric, ginger, peppermint, pomegranate, and horseradish.

For people dependent on opiates, a major hurdle to recovery is withdrawal. The defendants positioned their products as a solution to that problem: 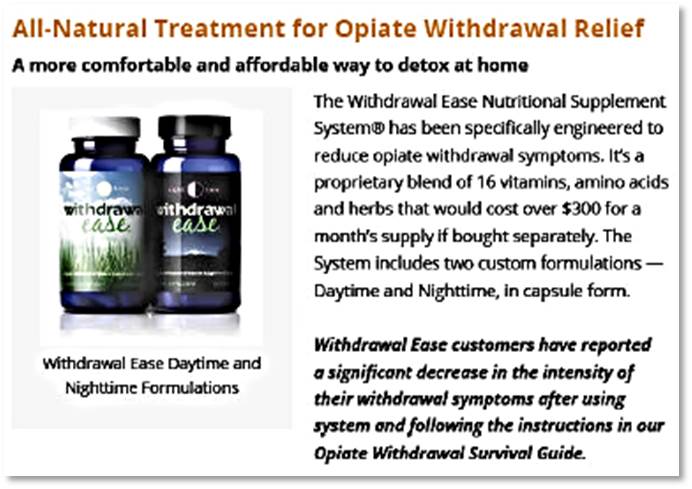 The defendants didn’t end there. In addition to making claims through consumer testimonials, they said the ingredients in Withdrawal Ease had been “proven efficacious under rigorous clinical trials” and specifically mentioned “Clinical Study Abstracts from The National Institutes of Health (NIH)” as proof of efficacy.

In addition, for people on the “road to recovery from opiate dependency,” the defendants touted Recovery Ease as an effective treatment for Post Acute Withdrawal Symptoms (PAWS), a serious medical condition sometimes reported after initial withdrawal symptoms have subsided.

Based on a review of the company’s so-called substantiation, the FTC charged that Catlin Enterprises and CEO George Catlin made deceptive claims about the products’ ability to significantly alleviate opiate withdrawal symptoms, increase the likelihood of overcoming dependency, or alleviate PAWS. What about the claim that clinical studies showed that Withdrawal Ease was effective?  False, alleged the FTC.

Under the terms of the proposed settlement, the defendants will need human clinical testing to support a host of addiction-related and disease treatment claims. Other health representations will need competent and reliable scientific evidence. Misleading claims about tests or studies are prohibited, too.

The proposed order imposes a $6.6 million judgment, which will be suspended based on the defendants’ inability to pay. There also is a clause that makes the full amount due if it turns out the defendants made any material misrepresentations or omissions in their financial statements.

This is the FTC’s second case challenging deceptive claims aimed at people struggling with opiate addiction. (The Sunrise Nutraceuticals settlement was the first.)

The topline takeway: Marketers that offer unsubstantiated answers to serious health problems can expect to hear from the FTC.