If you’re active in affiliate marketing, a summary judgment ruling by a United States District Court offers additional support for the conclusion that “Who, me?” isn’t likely to be a persuasive defense to allegations of deception. As a result of the holding, affiliate marketing network LeadClick Media and its parent company, CoreLogic, have to turn over a total of $11.9 million in ill-gotten gains.

A few years ago, you couldn’t push ENTER without having a bogus “news” site pop up hawking acai berry diet products. The FTC and the Connecticut AG ultimately settled a law enforcement action against LeanSpa, LLC, related companies, and corporate officer Boris Mizhen for a host of deceptive practices, including misleading weight loss claims and false promises of “free” trials. 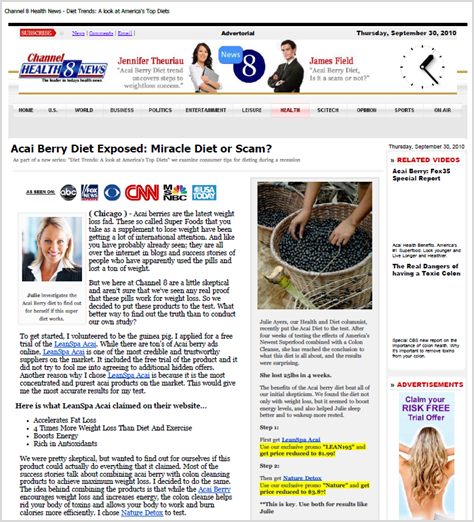 But the FTC and AG didn’t stop there. One of the ways LeanSpa pushed its products was by hiring LeadClick Media, which at the time was a big name in the affiliate marketing business. The FTC alleged that LeadClick used its extensive network of affiliate marketers to lure consumers to LeanSpa’s online store. One eye-catching method many of LeadClick’s affiliates used were those bogus news sites, which misappropriated the logos of legitimate media outlets and falsely claimed that independent journalists had endorsed the products. Many of the sites included glowing consumer comments that were just as phony as the “reporters.”

The Chief Judge’s opinion offers insights into affiliate marketing and includes factual findings that explain how the lucrative partnership between LeanSpa and LeadClick Media went from sweet to “See you in court.”

One argument LeadClick made in an attempt to deny liability was that it didn’t actually create the fake news sites. But as the decision notes, LeadClick employees knew that fake news sites were common in the industry, scouted and recruited affiliates who used that deceptive method, had the power to approve or reject their marketing sites, paid the affiliates, bought ad space for them, and gave them feedback about what they said on their sites.

Other parts of the opinion you’ll want to read:

(This post was updated on April 22, 2015, to indicate that the financial remedy entered by the Court totaled $11.9 million.)