The Federal Trade Commission, along with 11 states and the District of Columbia, today announced “Operation Game of Loans,” the first coordinated federal-state law enforcement initiative targeting deceptive student loan debt relief scams. This nationwide crackdown encompasses 36 actions by the FTC and state attorneys general against scammers alleged to have used deception and false promises of relief to take more than $95 million in illegal upfront fees from American consumers over a number of years.

Student loan debt affects more than 42 million Americans and, with outstanding balances of more than $1.4 trillion, student loans are the second largest segment of U.S. debt, after mortgages.

Operation Game of Loans includes seven FTC actions: five new cases, one new judgment in favor of the FTC, and a preliminary injunction entered in a case filed earlier this year. The agency alleges that the defendants in these actions charged consumers illegal upfront fees, falsely promised to help reduce or forgive student loan debt burdens, and pretended to be affiliated with the government or loan servicers, in violation of the FTC’s Telemarketing Sales Rule and the FTC Act. Operation Game of Loans also includes law enforcement actions by Colorado, Florida, Illinois, Kansas, Maryland, North Carolina, North Dakota, Oregon, Pennsylvania, Texas, Washington, and the District of Columbia. 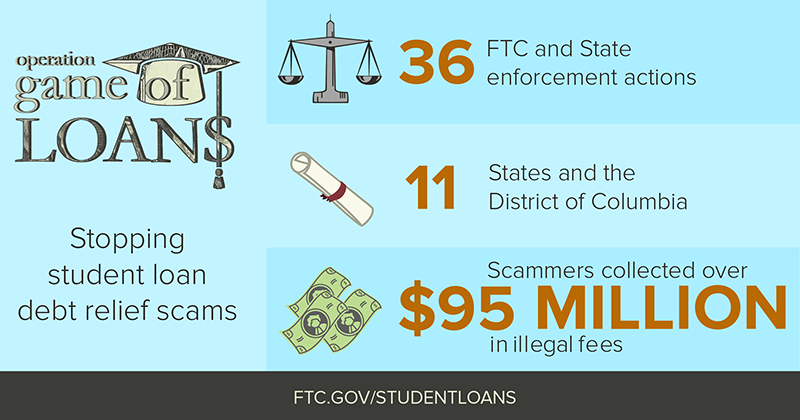 “Winter is coming for debt relief scams that prey on hardworking Americans struggling to pay back their student loans,” said Maureen K. Ohlhausen, FTC Acting Chairman. “The FTC is proud to work with state partners to protect consumers from these scams, help them learn how to spot a scam, and let them know where to go for legitimate help.”

In addition to its state partners, the FTC has been working closely with the U.S. Department of Education’s office of Federal Student Aid to raise awareness about student loan debt relief schemes, and ensure that borrowers know to visit StudentAid.gov/repay for information about existing repayment and forgiveness programs available to them at no cost. 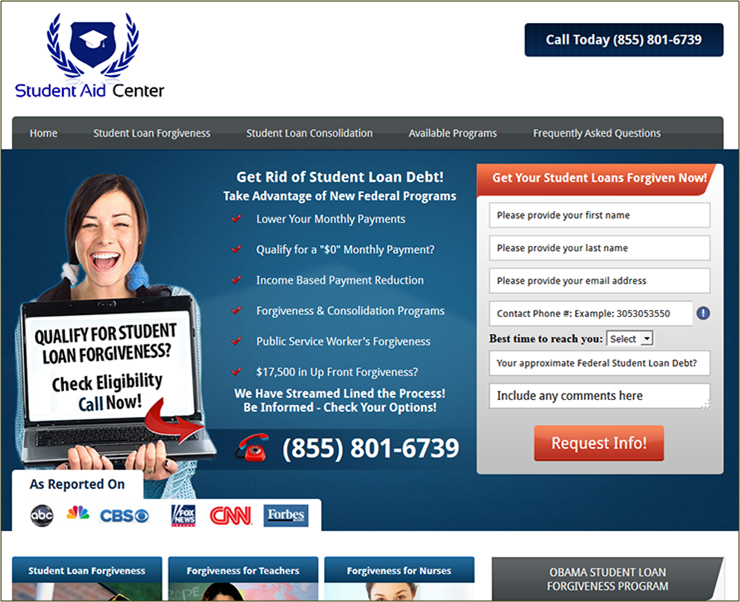 The FTC recently filed five new cases against 30 defendants as part of Operation Game of Loans. In each action, the FTC obtained temporary restraining orders (TROs) that halted the scams and froze defendants’ assets. The Commission vote authorizing staff to file the complaint in each action was 2-0.

To help consumers avoid falling victim to such fraud, the FTC has updated its consumer education related to student loan debt relief scams at ftc.gov/StudentLoans. As a follow-up to the sweep of law enforcement actions, the FTC later this month will be holding a Twitter chat with state attorneys general and a Facebook Live session with staff attorney experts on ways to avoid student loan debt relief scams.

Consumers should remember that only scammers promise fast loan forgiveness, and that scammers often pretend to be affiliated with the government. And consumers should never pay an upfront fee for help, and should not share their FSA ID—a username and password used to log in to U.S. Department of Education websites—with anyone.

Consumers can apply for loan deferments, forbearance, repayment and forgiveness or discharge programs directly through the U.S. Department of Education or their loan servicer at no cost; these programs do not require the assistance of a third-party company or payment of application fees. For federal student loan repayment options, visit StudentAid.gov/repay. For private student loans, contact the loan servicer directly.

NOTE: The Commission files a complaint when it has “reason to believe” that the law has been or is being violated and it appears to the Commission that a proceeding is in the public interest. The cases will be decided by the court.