Do not pass GO. Do not collect $200. And possibly face criminal charges. That’s the message of Operation Corrupt Collector, a coast-to-coast crackdown by the FTC, three other federal agencies, and partners from 16 states. Operation Corrupt Collector encompasses more than 50 actions challenging some of the worst-of-the-worst debt collection tactics, including phantom debt collection – the practice of coercing consumers to pay debts they don’t owe or the company has no right to collect.

As part of Operation Corrupt Collector, the FTC has announced two new cases and settlements in three pending actions.

National Landmark Logistics, LLC. Filed in federal court in South Carolina, the complaint alleges that National Landmark Logistics, four related companies, and three individuals took in more than $12 million through illegal debt collection practices – including pressuring consumers to pay debts they didn’t actually owe or that the defendants had no right to collect. A typical modus operandi was to use robocalls to leave deceptive messages that people were subject to some sort of audit or proceeding or would be served with papers at home or at work. When consumers returned the call to find out more, the FTC says the defendants falsely claimed to be from “Tristar Mediation,” “Tristar Legal Services,” “Tristar Attorneys at Law,” or “Statewide Legal Attorneys” and that the person was delinquent on a debt. In many instances, collectors threatened consumers with legal action unless they made an immediate credit or debit card payment. To make the pitch seem more believable, collectors often had (or claimed to have) personal information about the supposed debtor – for example, their Social Security number, credit card or bank account numbers, or family members’ contact information. The pending lawsuit also names National Landmark Service of United Recovery LLC; Liberty Solutions & Associates LLC; LSA Processing System, LLC; Silverlake Landmark Recovery Group, LLC; Jean Cellent; James Dennison; and Eric Dennison.

Absolute Financial Services, LLC. The FTC complaint charges that Absolute Financial Services, which operates in the Charlotte, North, Carolina area, collected more than $5.2 million from consumers, using National Landmark Logistics to place deceptive robocalls on their behalf. The calls claimed that people would be served with important papers or faced legal action or audits if they didn’t respond. The FTC alleges that once people called back, the defendants’ collectors falsely claimed to be representatives of law firms or mediation companies. According to the complaint, the collectors told consumers that they owed on a credit card or other debt and often threatened them with arrest if they did not immediately pay the debt. Using data from National Landmark Logistics, the Absolute Financial Services collectors included nuggets of consumers’ personal information in an attempt to add an aura of truth to the false statements they made about purported debts. Filed in South Carolina, the lawsuit also names Absolute Financial Services Recovery LLC, AFSR Global Logistics, LLC, LaShone Elam, and Talesia Neely. 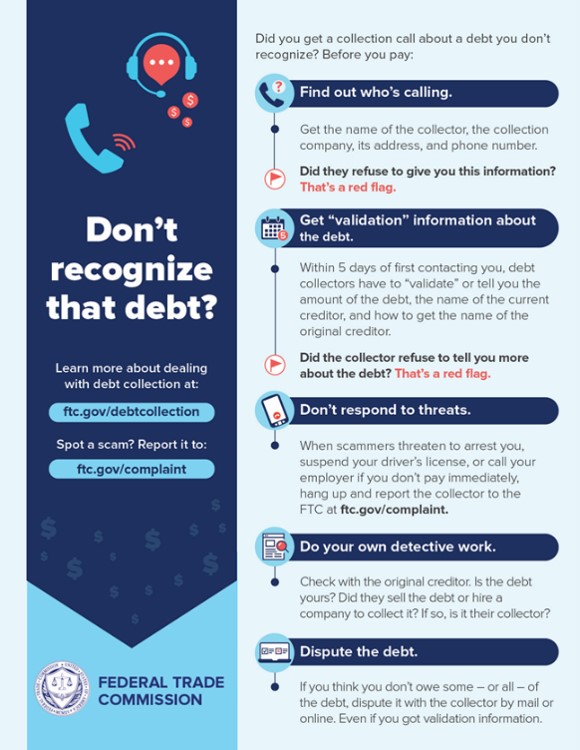 As part of Operation Corrupt Collector, state and local consumer protection agencies across the country have joined the FTC in introducing a new infographic to help consumers know their rights when contacted by debt collectors and to take protective steps if they’re pressured to pay a debt they don’t recognize. The FTC also has unveiled a new online dashboard revealing that so far in 2020, the FTC’s Consumer Sentinel Network has received more than 85,000 reports from consumers about debt collection, with nearly 45% related to debts that consumers didn’t owe or abusive and threatening practices.