FTC wants your feedback about proposed Made in USA Rule

If your clients are interested in Made in USA issues – and you know they are – there are two developments at the FTC they need to know about.

First, the FTC just announced a Notice of Proposed Rulemaking for a Made in USA Labeling Rule. You’ll want to read the notice in detail, but the proposed Rule would apply to labels on products that make unqualified Made in USA claims. (In FTC parlance, an “unqualified” claim is a broad representation made without limitations.) The proposed Rule would incorporate established guidance already set forth in FTC decisions and orders and in the agency’s 1997 Enforcement Policy Statement on U.S. Origin Claims.

Consistent with that guidance, the proposed Rule would prohibit marketers from making unqualified MUSA claims on labels unless:

Once the proposed Rule is published in the Federal Register, we invite you to file a public comment either online or on paper. (Thanks for following the instructions for submitting comments included in the notice of proposed rulemaking.) 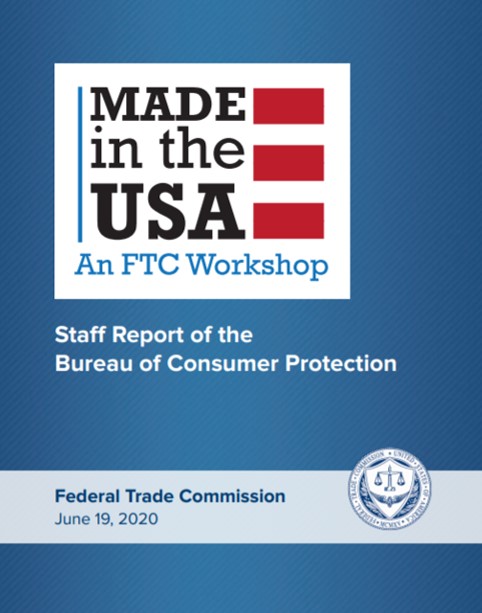 Development #2 is that the FTC just issued a staff report on last fall’s Made in USA workshop convened to consider consumer perception of Made in USA claims and to discuss the agency’s Made in USA enforcement program. Dive into the report for the details, but according to the one panelist who provided survey evidence on how consumers understand Made in USA claims, a 2013 study suggests that almost 3 in 5 Americans agree that “Made in America” means that all parts of a product, including any natural resources it contains, originated in the United States. According to that same study, one third of consumers believe that 100% of a product must originate in a country for it to be called “made” in that country. The report cites those statistics in support of long-standing guidance in the FTC’s Enforcement Policy Statement on U.S. Origin Claims that at least a significant minority of consumers are likely to be deceived by an unqualified Made in USA claim for a product incorporating more than a trivial amount of foreign content.