“A guy walks into a bar . . . .” It’s a typical set-up for a stand-up comedian, but we never thought it would be the opener about a proposed FTC settlement involving unproven treatment claims for serious diseases.

Texas-based A&O Enterprises, iV Bars, and owner Aaron Roberts sell and administer intravenous “cocktails” – bags containing mixtures of water, vitamins, minerals, and amino acids administered through an IV drip. Customers who visit an iV Bars location complete a short health questionnaire, which gets a quick online once-over by a doctor. (iV Bars pays the doctor a flat $250 monthly fee.) After signing a release form, the customer sits in a comfy chair while a nurse administers the IV. The cost runs $100 or more per session. iV Bars also makes house calls. 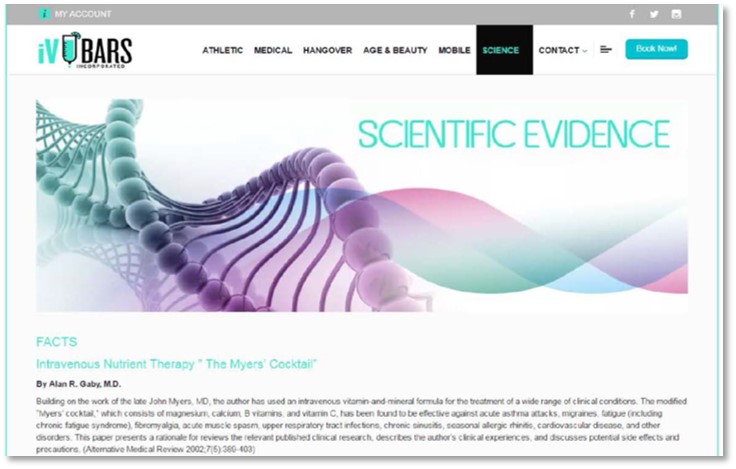 The company’s website made strong claims about the benefits of its some of its products. The company claimed its drips are an effective treatment for cancer, angina, congestive heart failure, multiple sclerosis, diabetes, fibromyalgia, neurodegenerative disorders, and other serious medical conditions. What’s more, said the company, the treatments are safe for people of any age and cause no side effects. (The cocktails also were touted as a remedy for “wedding disasters.” We won’t ask.)

But the company didn’t just say its treatments work. iV Bars claimed they were clinically proven. For example, iV Bars touted “published clinical research” establishing that the Myers Cocktail – a particular formulation offered by iV Bars – “has been found to be effective” for treating fibromyalgia and cardiovascular disease. “The Science Behind iV Bars” page on the company’s website further represented that the treatments were “developed by a team of leading medical doctors, naturopathic doctors, biochemists, nutritionists and exercise physiologists.” Then there was the “Applied Biology and Chemistry Group” at “iV Bars Research Labs” who test and approve what’s in each cocktail. In addition, the company used imagery – microscopes, white-coated medical professionals, double helixes, test tubes, and the like – to bolster its claim of scientific support.

That’s what iV Bars told consumers, but what does the FTC allege in the lawsuit? First, the FTC charges that the company doesn’t have substantiation to support that its formulations are effective for treating cancer, cardiovascular disease, multiple sclerosis, diabetes, etc. Furthermore, the company’s own website and release form warn of complications like allergic reactions, joint pain, abnormal bleeding, heart palpitations, etc. And yet iV Bars’ promotional materials claimed that treatments are “safe for all ages" and cause “no side effects or down time.” What about iV Bars’ representation that its treatments have been clinically or scientifically proven? False, says the FTC.

Among other things, the proposed order will require iV Bars to have randomized, double-blind, and placebo-controlled human clinical testing to support any claim that its cocktails cure, mitigate, or treat any disease. The order also bans misrepresentations about the kind of medical professionals the company assembles to formulate, test, or approve its products. Also prohibited: references to fictitious research facilities, including “iV Bars Research Lab.” In addition, the company has notified consumers who bought the Myers cocktail that scientific studies haven’t shown it to be an effective treatment for any disease, including the serious conditions mentioned in iV Bars’ marketing materials.

For advertisers who belly up to the bar, the case serves a two-for-one compliance cocktail:

Not just any study will do. “We have a study!” Yes, that could be a good start. But having a study is not the same as having a competent and reliable study, which is what you need before you make disease treatment claims. According to the complaint, there was one randomized, controlled human clinical trial of an iV Bars’ cocktail. But a pilot study on the wrong population – the trial was limited to fibromyalgia patients – that fails to show statistically significant results is neither competent nor reliable. The message to marketers: Make sure your studies are competent and reliable, and have produced statistically and clinically significant results.

There must be a good “fit” between the evidence and the ad claim. As evidence for its claims, the company offered articles about individual ingredients in iV Bars’ cocktails that were administered to animals or humans. But the FTC says they were in doses, formulations, routes of administration, or regimens different from what iV Bars customers received. Here’s advice on that subject from FTC’s Dietary Supplement Guide:

Advertisers should make sure that the research on which they rely is not just internally valid, but also relevant to the specific product being promoted and to the specific benefit being advertised. Therefore, advertisers should ask questions such as: How does the dosage and formulation of the advertised product compare to what was used in the study? Does the advertised product contain additional ingredients that might alter the effect of the ingredient in the study? Is the advertised product administered in the same manner as the ingredient used in the study? Does the study population reflect the characteristics and lifestyle of the population targeted by the ad? If there are significant discrepancies between the research conditions and the real life use being promoted, advertisers need to evaluate whether it is appropriate to extrapolate from the research to the claimed effect.

The FTC is accepting comments about the proposed settlement until October 22, 2018.

The proposed settlement should also include the penalty for such companies who falsify or manipulate research findings for the monetary benefit and leave the health of consumers at stake. If Ad claim is found falsified huge penalty should be imposed.