Gift card scams: Out of the shadows and into the FTC Data Spotlight

Gift cards may be at the top of your holiday gift giving list. But there’s another list that gift cards top, and it’s decidedly less festive. According to the FTC’s latest Consumer Protection Data Spotlight, reports received in the Consumer Sentinel database reveal that gift cards are the #1 payment method of choice for scammers, leading to a reported $148 million stolen from consumers. Is your business taking steps to protect customers from this form of fraud?

The scam typically starts with a phone call from a crook impersonating a well-known business. The caller tells consumers that to fix a supposed security problem with their account, the person must get a gift card and then send a photo of it to the caller. It’s really just a shady way for the criminal to be able to redeem the card without having it in their hands. 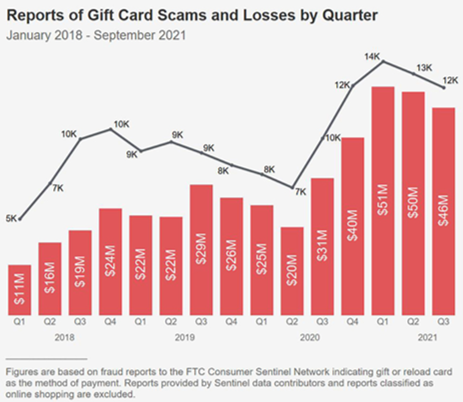 People also report that scammers demanding gift cards may claim to be from agencies like the Social Security Administration: “Give us the numbers or face frozen accounts or even arrest.” Still others have reported that the demand came from a romantic interest or someone claiming to be an employer, sweepstakes company, or family member facing an emergency.

These red flags may be apparent when you think it through in retrospect, but that shows you just how convincing – and threatening – these criminals can be in the moment. They’ve also honed their pitch to avoid detection. For example, they may send consumers from store to store in a nefarious form of scavenger hunt. Their motive: to avoid calling attention to an unusually large gift card transaction. Scammers also may keep consumers on the phone so people can’t check things out with a trusted family member or friend. They even coach consumers on what to say if a vigilant store cashier asks about a suspicious gift card transaction.

According to the Data Spotlight, scammers have become quite choosy in demanding what cards to buy and where to buy them. In the first nine months of 2021, over twice as much money was reported lost to scammers who demanded Target gift cards than to the next brand on the list. Google Play, Apple, eBay, and Walmart cards followed. When scammers told people where to buy cards, consumers who reported losing money were most frequently sent to Target stores but Walmart, Best Buy, CVS, and Walgreens were mentioned, too.

What else does the Data Spotlight reveal?

Reputable retailers don’t want their good names smudged by scammers. That’s why the FTC has created a Stop Gift Card Scams Toolkit with resources to help businesses alert consumers about the risk of gift card scams. By using point-of-purchase signs, check-out counter alerts, and messages in social media, companies can help protect their customers from this form of fraud.

The FTC also has advice for consumers about spotting a gift card scam. The message is simple: Gift cards are for gifts, not payments. Period.