Attending live performances and sporting events again is just one of the things people are looking forward to. But when that time comes, the issues raised at the FTC’s That’s the Ticket workshop will still affect consumers. The FTC just issued a Staff Perspective, highlighting key takeaways from the event.

When the keynote speaker opens the day by saying, “As an economist, it’s clear that the ticket market is broken in significant ways,” you can be assured that panels featured a frank exchange of views. You’ll want to read the Staff Perspective to learn more about what was said, but here are some of the topics that generated substantial discussion. 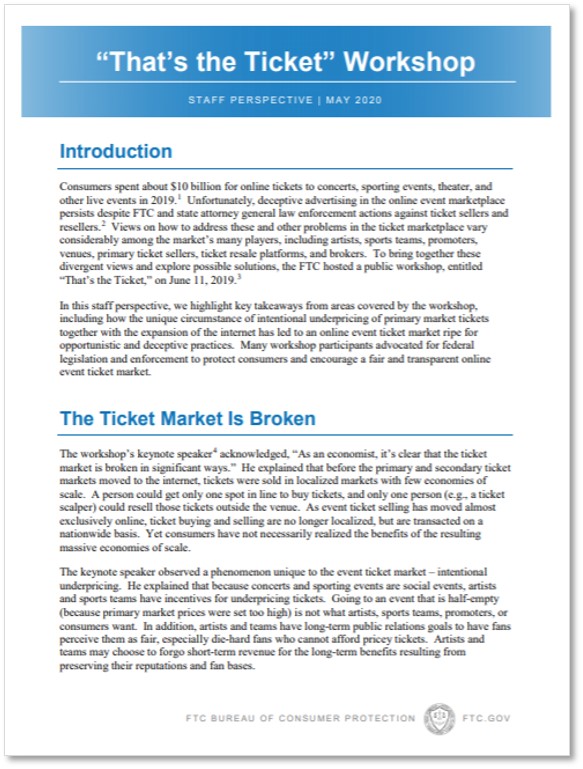 Holdbacks.  What role do holdbacks play in limiting the number of tickets to popular events that are available for average consumers? For example, does it help or hinder ordinary buyers when artists or promoters hold back tickets for themselves and other VIPs?

Transparency.  Workshop attendees also heard divergent views on the impact of more transparency about ticket allocations. Would it benefit consumers to know more about the number or percentage of tickets given to artists and promoters for their own use; the number or percentage allocated for fan club sales or credit card members; how they could qualify for those specialized sales; and if tickets will be released on a staggered basis where prices change in real time depending on demand.

The BOTS Act.  Another hot topic was the Better Online Ticket Sales (BOTS) Act, passed by Congress in 2016. The statute makes it illegal to use bots or other means to circumvent limits on bulk ticket purchases. The BOTS Act also makes it illegal to sell tickets obtained in violation of the law if the seller participated in the illegal purchase, or knew or should have known how the tickets were bought. Noting the technological challenges in thwarting bots and identifying who’s behind them, panelists emphasized the need for coordination among the primary and secondary ticket markets, the technology sector, and law enforcers.

All-in pricing.  Panelists also observed that mandatory fees often increase the ticket price to consumers by as much as 30% – information that often isn’t disclosed until late in the transaction, making it harder for consumers to comparison shop. Although perspectives varied on how best to display ticket prices and fees, panelists who expressed an opinion favored requiring all-in ticket pricing through federal legislation or rulemaking.

Speculative ticket selling.  Another controversial practice is “speculative ticket” listings – listings on some resale platforms that aren’t for actual tickets, but rather are for an “option to buy” if a reseller can get the tickets after a consumer purchase. Panelists debated the need for legislation to address this practice and the effectiveness of current state statutes.

Deceptive websites and URLS.  Even after FTC law enforcement actions, some ticket resellers continue to use deceptive landing pages and URLs that mislead consumers into thinking they’re on the official sites of artists, venues, and other primary ticket sellers. Panelists recommended federal legislation and increased law enforcement to combat the deceptive practice.

The Staff Perspective notes that two days after the workshop, members of Congress reintroduced the Better Oversight of Secondary Sales and Accountability in Concert Ticketing Act. The proposed legislation targets a number of the issues discussed at That’s the Ticket.

(This post was updated on May 8, 2020, to indicate that two days after the workshop, members of Congress reintroduced the Better Oversight of Secondary Sales and Accountability in Concert Ticketing Act.)