FTC’s Teami case: Spilling the tea about influencers and advertisers

The “what” of the FTC’s settlement with Teami, LLC, shouldn’t come as a surprise. The complaint alleges the defendants took in more than $15 million by deceptively claiming their array of teas could cause rapid and substantial weight loss, “fight against cancerous cells,” decrease migraines, unclog arteries, and prevent colds and flu. What’s different is the “how.” The defendants advertised primarily through a massive social media campaign. Also notable is the “who” – a roster of celebrities and influencers, some of whom have now been sent warning letters reminding them of their legal obligation to disclose their connections to the products they promote.

Florida-based Teami and co-owners Adi Halevy and Yogev Malul sell Teami-branded teas, including the Teami 30 Day Detox Pack, and Teami-branded skincare products. The defendants didn’t just convey claims on their website. They paid celebrities and other social media influencers with millions of followers to endorse their products on Instagram. The complaint cites examples of Teami making allegedly misleading weight loss claims for the 30 Day Detox Pack through its paid influencers’ Instagram posts. 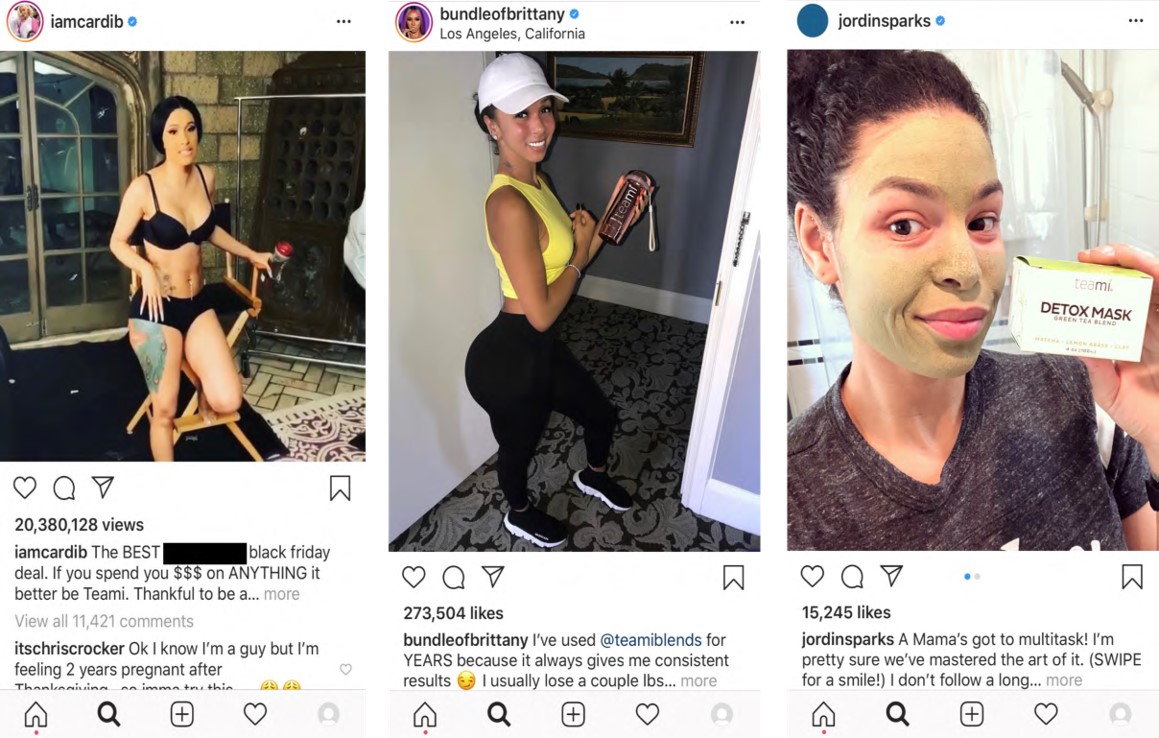 The FTC also alleges that Instagram posts by well-known entertainers and other influencers failed to disclose adequately that the defendants had paid them to endorse Teami products. Cited in the complaint are examples from recording artists Cardi B and Jordin Sparks; TV personalities Adrienne Bailon, Jenicka Lopez, Leyla Milani-Khoshbin, Darnell Nicole, and Alexa PenaVega; and influencers Katya Elise Henry, Princess Mae, and Brittany Renner. FTC staff has sent warning letters to those ten people.

But to get a better idea of the FTC’s allegations against Teami, let’s go back to April 2018 when FTC staff wrote to Teami about endorsements for their products that influencers had posted on Instagram. The letter reminded Teami that material connections between endorsers and advertisers (including payments) should be clearly and conspicuously disclosed. And by “clear and conspicuous,” FTC staff stated that disclosures should use unambiguous language that consumers would easily notice and understand. The letter also said that because consumers viewing posts on Instagram typically see only the first few lines unless they click “more,” endorsers should disclose any material connection above the “more” link.

In May 2018, Teami implemented a social media policy they say they either gave to their paid influencers or included in their contracts. The policy instructed influencers, “[E]nsure that all posts for which you receive free product or any type of compensation as an inducement to make the post … [u]se hashtags or words that clearly let the public know of the connection between you and Teami” and “DON’T … [m]ake the disclosure below the ‘more’ button – the disclosure needs to be seen in the first part of your post without clicking anything else.” In many instances, contracts required paid influencers to get the company’s approval in advance for their Teami-related posts.

And yet despite that, the complaint alleges that many Instagram posts by Teami’s paid influencers didn’t comply with Teami’s own social media policy. You’ll want to read the complaint for examples of what consumers saw when viewing their feeds on a smartphone, but the primary takeaway is this: The influencer’s endorsement of the Teami product invariably appeared within the post’s video or photo or within the first two or three lines of the post’s caption. But any disclosure regarding the influencer’s connection to Teami wasn’t visible unless the consumer clicked “more.”

The proposed settlement with Teami, Ms. Halevy, and Mr. Malul prohibits deceptive weight loss and health claims and requires the clear and conspicuous disclosure of any unexpected material connection. It also requires the defendants to maintain a system to monitor and review how endorsers are disclosing those connections. Based on the defendants’ financial condition, the $15.2 million judgment will be partially suspended upon the payment of $1 million.

Both advertisers and influencers can draw some unmistakable inferences from the action against Teami.

Weight loss and disease-related claims need solid substantiation. If you represent that consumers who use your product will drop pounds, or if you say (or imply) your product will prevent or treat a serious medical condition, you need sound scientific evidence. To avoid legal hot water, have your proof down cold.

Advertisers, clarify your expectations. Before bringing an influencer on board, make sure you’ve explained the dos and don’ts in detail. A contract provision is a fine start, but it’s probably not enough. Educate influencers about the standards for clearly disclosing material connections and the possible legal ramifications if they don’t. If a prospective influencer doesn’t strike you as the type willing to listen and learn, consider whether that person is the best representative for your brand. 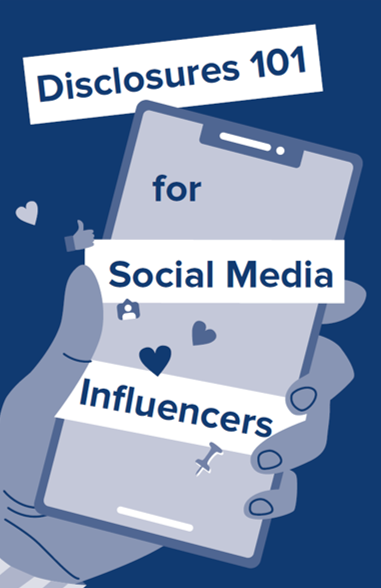 Actions speak louder than words. Was it movie mogul Sam Goldwyn who said “An oral contract isn’t worth the paper it’s printed on”? A written policy for influencers without effective monitoring and follow-through suffers from the same deficiency. Keep an eye on what influencers are doing on your behalf. If you pre-approve your influencers’ posts, don’t give them the OK unless they have adequate disclosures. And if your influencers don’t follow your rules, bid them buh-bye.

Influencers, the law applies to you. People in the fashion, fitness, or entertainment world may think legal compliance isn’t their thing. But by accepting compensation for endorsements, influencers have taken on certain legal obligations. That includes clearly and conspicuously disclosing when they have a material connection to a product. Influencers often pride themselves on keeping it real with their followers. Easy-to-find and easy-to-understand disclosures are part of that mindset.

For more information – and no legalese – read Disclosures 101 for Social Media Influencers and watch this video. Consult the FTC’s Endorsements, Influencers, and Reviews page for additional resources.