It’s a disturbing trend. Companies are targeting older consumers, claiming to have easy answers for serious diseases for which there may not be a proven cure. That’s one allegation in the FTC’s action against Nevada-based telemarketer Health Center, Inc.  Another count challenges what we call “own-dorsements.”

According to Health Center’s telemarketing scripts, websites, social media, and testimonials from supposedly satisfied customers, the company’s Rejuvi-Cell oral spray and Rejuvi-Sea and Rejuvi-Stem pills could treat a broad range of medical conditions: everything from cancer, Alzheimer’s disease, and Parkinson’s disease to hepatitis, heart attacks, and high cholesterol. In promoting the products, which sold in packages priced between $350 and $800, the company checked the buzzword boxes with science-y sounding terms like homeopathic, adult stem cell enhancement, and marine phytoplankton. 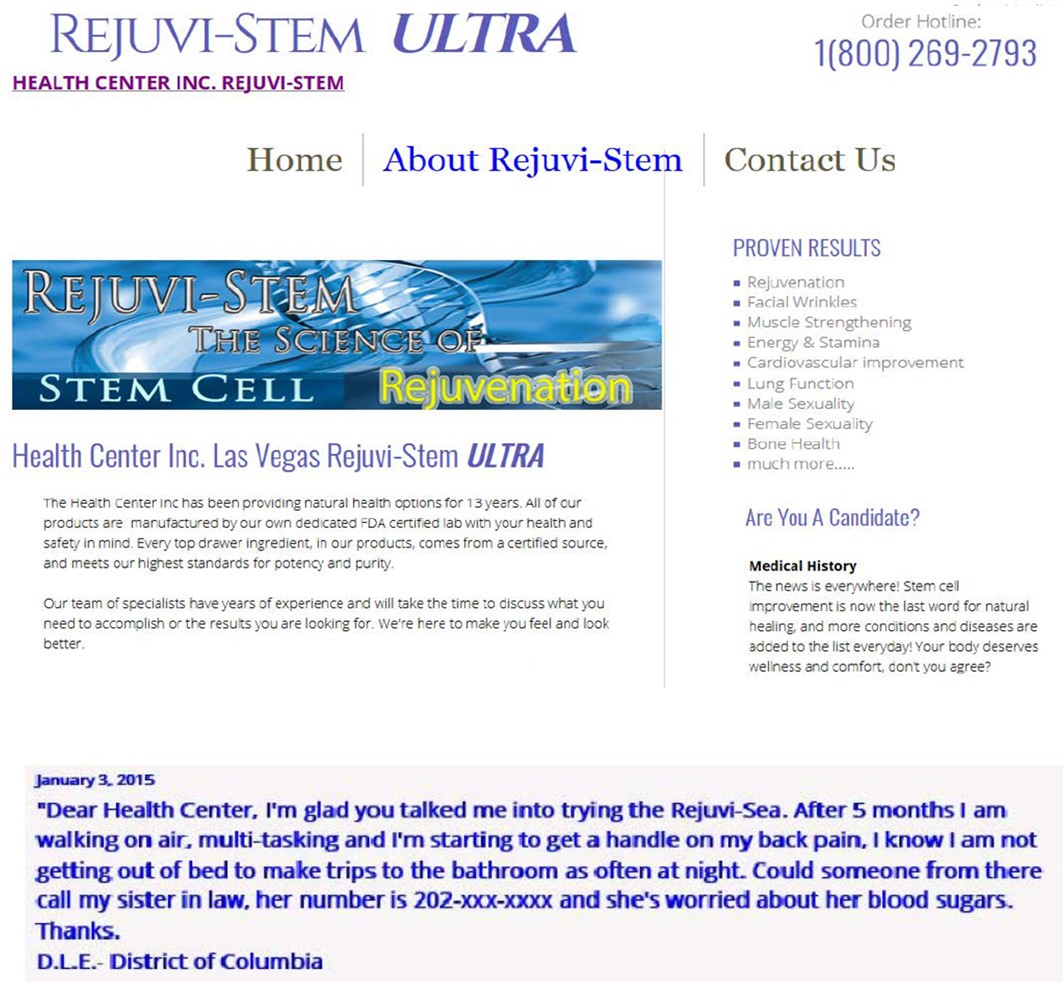 The company claimed that diseases like diabetes, rheumatoid arthritis, and dementia “could be greatly reduced if not eliminated” through the use of its products. According to the complaint, Health Center’s telemarketers – who were instructed to follow the scripts word-for-word – told consumers the main ingredient of Rejuvi-Sea “alkalizes your body . . . so you can’t grow cancer cells.” Then there were heartfelt testimonials from purported customers who described themselves as “walking on air” and “amazed and redeemed,” thanks to the products.

But the FTC says the company hasn’t conducted any studies demonstrating the products cure or treat any diseases or health conditions and there are no human clinical studies in the scientific literature to that effect. What’s more, the lawsuit alleges that some of those glowing endorsements that appeared to come from satisfied customers across the country were actually “own-dorsements” – testimonials from Health Center’s own employees.

To settle the case, the defendants have agreed to injunctive provisions, including a requirement that a broad range of health claims must have the support of randomized, double-blind, and placebo-controlled human clinical testing. Almost all of the $8.6 million judgment will be suspended, based on their financial condition.

Aside from the obvious points that the FTC continues to take a close look at cures targeting older consumers and that companies shouldn’t palm off endorsements from employees as independent opinions, the case illustrates two other important principles. First, the defendants’ unlawful practices were the subject of an earlier enforcement action by the Iowa Attorney General. Companies shouldn’t have to be told once of the need to substantiate their health claims – and they certainly shouldn’t have to be told twice. Second, the complaint includes a count for violating the Telemarketing Sales Rule, which prohibits misrepresentations about “any material aspect of the performance, efficacy, nature, or central characteristics of goods or services that are the subject of a sales offer.” That’s yet another reason to keep your telemarketing efforts above board.

Reno Nevada (not verified)
Thanking you again for you wonderful efforts for trying to help the elderly. I know that this happens every day to the elderly because they no one one to help them make wise choices. I am 73 and have not fallen for these tactics. I am of sound mind and know that only a doctor can prescribe in these situations. I have prescribed medication for my arthritis. It helps bu I hope that people read this and help their parents I know with the aging process it is not going to go away. I hope that everyone reads and help their parents and loved one make the right decisions about their health. I read and take precautions for every article that you write. Thank you for caring