The sellers of Synovia claimed their dietary supplement “paves the pot holes” in joints damaged by arthritis. But an FTC lawsuit alleges the primary pot holes were in the company’s purported proof, which left consumers streamrollered by false and deceptive advertising claims.

Colorado-based A.S. Research and owners Stephen J. Young and Michael K. Ledeboer promoted Synovia in newspaper ads, online, and in direct mail “magalogs” – multipage promotional mailers. For the millions of Americans with arthritis, the defendants promised dramatic pain relief. They also claimed Synovia would provide relief on par with prescription treatments – “A popular needle injection for people with joint pain is now available in an inexpensive nonprescription pill” – and that the product contained “The only collagen clinically proven to reduce pain by 95%.” 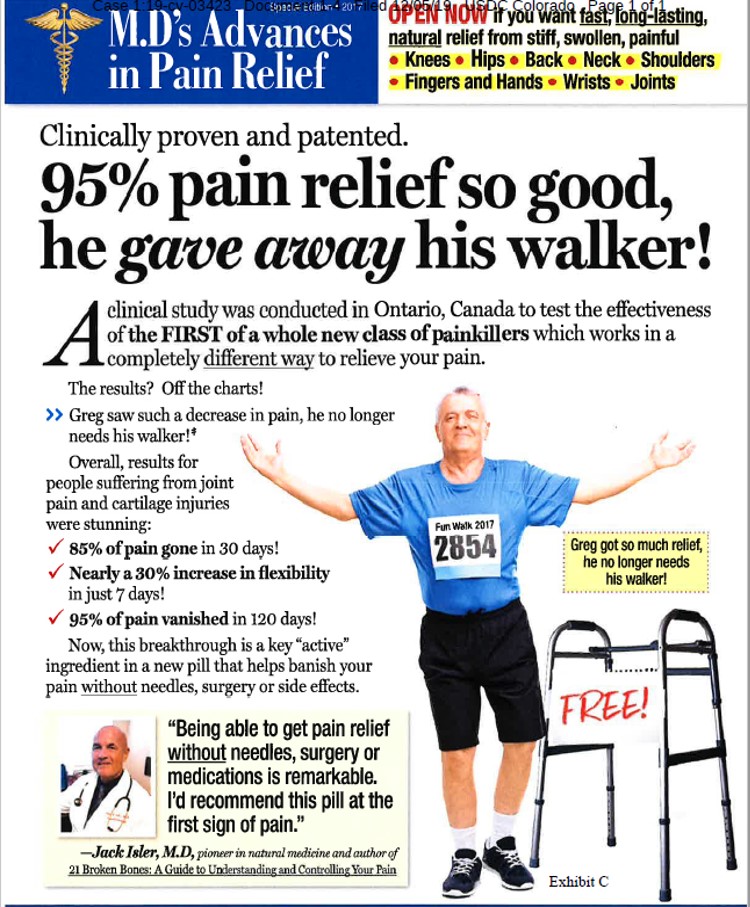 For consumers who still weren’t convinced, ads featured glowing testimonials from an array of consumers, including “Greg” who “gave away his walker!” and an “early user” named Steve who claimed his “knees and hands haven’t felt this good in years!” Then there were purported expert endorsements from three doctors.

But according to the FTC, the defendants didn’t have appropriate science to back up their claims and certainly didn’t have sound testing to support their representation that the collagen in Synovia was “clinically proven to reduce pain by 95%.”

In addition, the complaint alleges the company’s testimonials were rife with deception. According to the FTC, those purported doctor endorsements weren’t based on an appropriate exercise of medical expertise. What about the dozens of consumer testimonials featured in ads? In many instances, the people who praised the product didn’t use the formulation that was actually for sale. In other cases, their endorsements resulted from the defendants’ offer of free product in exchange for “especially positive and inspiring” reviews of Synovia – a material connection the defendants failed to disclose. Still other testimonials were flat-out fakes allegedly fabricated by the company. And that early user “Steve” who reported such dramatic results? The ads didn’t disclose that was A.S. Research’s co-owner – and now co-defendant – Stephen J. Young.

The FTC also challenges an upsell tactic as misleading. When consumers ordered Synovia by phone, operators urged them to pay an extra $9.95 per bottle for “Synovia Plus,” which supposedly contained “one additional ingredient designed to increase the overall relief and speed the repair.” But according to the complaint, regardless of whether consumers paid the extra money, everyone received the same product.

Under the terms of the proposed settlement, the defendants will need randomized clinical trials to support a long list of arthritis- and disease-related claims. Other order provisions are tailored to address the violations alleged in the complaint. The $4.1 million financial judgment will be partially suspended after the defendants turn over $821,000.

The case suggests three practices to help prevent pot holes in your own promotions.

Ensure your arthritis claims are backed by solid proof. According to the CDC, 49.6% of Americans over 65 have a doctor’s diagnosis of arthritis – and it’s not just an “OK, Boomer” thing. For the 45-64 age group, that number is 29.3%. The CDC estimates that medical costs and lost wages top $300 billion. Given the injury that broken promises inflict on consumers, the FTC insists that advertisers have sound science to support arthritis-related representations.

Avoid the speed bumps that lead to endorsement enforcement. According to the FTC Endorsement Guides, consumer testimonials must reflect the truthful experience of real people. Furthermore, for claims conveyed to consumers through testimonials, the advertiser needs the same kind of substantiation necessary “if it had made the representation directly, i.e., without using endorsements.” Marketers also should be cognizant of the typicality doctrine – the principle that an ad containing consumer endorsements “will likely be interpreted as representing that the endorser’s experience is representative of what consumers will generally achieve” in actual use. And if there is a material connection between an advertiser and an endorser that consumers wouldn’t expect – it could be anything from an employment relationship to free products – that connection must be clearly disclosed.

Make sure your upsells don’t come with a downside. The FTC alleges that once the defendants had consumers on the phone, their operators used false claims to hoodwink people into paying extra for “Synovia Plus.” Advertisers should remember that established truth-in-advertising standards apply to upsells, too.

rural man
But... did the product actually work at all?
Guest
I'm a fraud advocate, These companies can't fool me!! I'm trying to get off all medicines, they will kill you. Looking into natural healing. Too many people want your money fraudulently. The problems I have are with the companies I must deal with. Constant frauding. It doesn't matter is you are in poverty or a child. They want your money. So keep up the good work. I want to hear about it.