Making Made in USA claims? Hang your hat on accuracy.

As the saying goes, some people wear their hearts on their sleeve. And many consumers who feel strongly that “American Made Matters” wear their hearts on their head. In other words, when selecting among competing derbies, fedoras, porkpies, or stingy brims, they may have chosen hats manufactured by Pennsylvania-based Bollman Hat Company and advertised with the claim “American Made Matters – Choose American.” An FTC complaint challenges that “American Made” representation as deceptive, but that’s just one aspect of the action against Bollman. 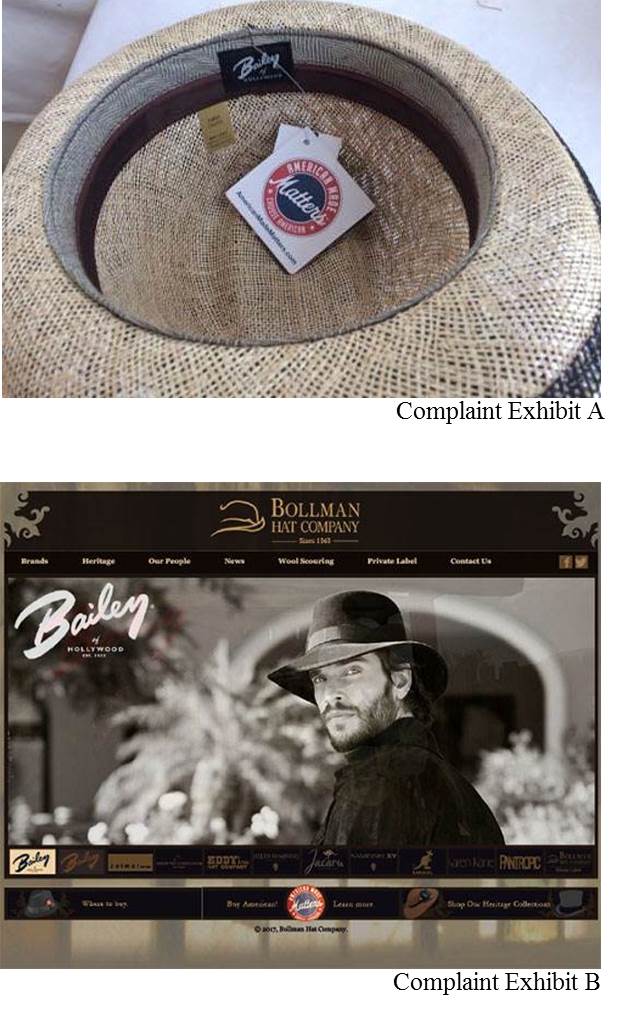 Bollman is a head name in the headgear industry, selling hats under the Kangol, Betmar, Bailey Western, and Country Gentleman brands, to name just a few. The company’s products and ads often featured that “American Made Matters – Choose American” seal. Despite the company’s claim that its hats were “Made in USA since 1868,” “Made in the USA for 100 Years or More,” or #madeintheusa, the FTC alleges that more than 70% of its hat styles were wholly imported as finished products. Of the remaining styles, many contained significant imported content. Thus, the FTC challenged those representations as false.

While it featured “American Made Matters – Choose American” in its own marketing, Bollman expanded its business from hats to seals, too. Bollman set up a wholly owned subsidiary, SaveAnAmericanJob, LLC, and jointly did business as “American Made Matters” to market the seal to other companies. In pitching the seal, the respondents said, “You will increase sales to consumers and businesses who are actively looking to buy American Made Products.”

According to the complaint, Bollman and its SaveAnAmericanJob subsidiary granted the seal to any company that claimed it had a United States-based manufacturing factory or one product with a U.S.-origin label, and met two membership requirements: 1) the company had to self-certify that at least 50% of the cost of at least one of their products was incurred in the United States, with final assembly or transformation in the U.S., and 2) the company had to pay an annual licensing fee of $99. Bollman and SaveAnAmericanJob would then promote member companies on their American Made Matters website and highlight them in social media. 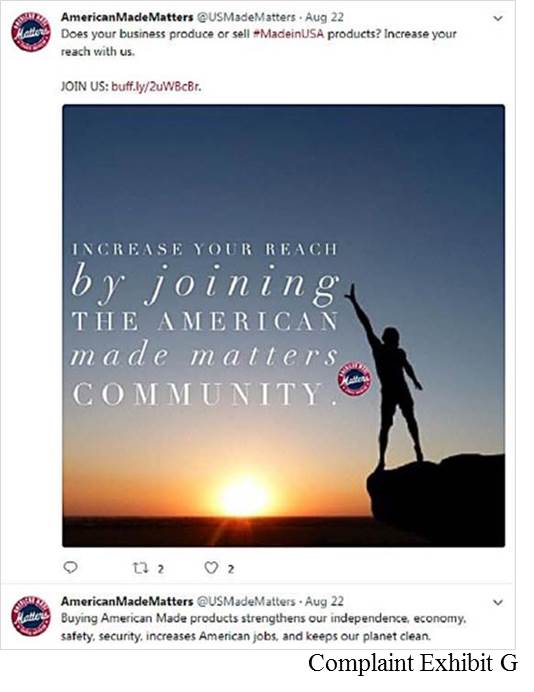 A closer look at the complaint outlines the FTC’s concerns. First, the lawsuit alleges that the respondents made false Made in USA claims about their own products. (Remember that under the FTC’s Enforcement Policy Statement on U.S. Origin Claims, products marketed with that representation must be all or virtually all made in the United States.)

In addition, the FTC charged that through the use of the American Made Matters seal, the respondents conveyed that an independent organization had reviewed and endorsed their products as US-made and that others authorized to use the American Made Matters designation had been independently and objectively evaluated for compliance with the membership standard. The complaint also alleges that the respondents represented on their website and in social media that American Made Matters members sell products that are all or virtually all made in the United States – a claim the FTC says was false or unsubstantiated.

Under the proposed settlement, the respondents are prohibited from making unqualified U.S.-origin claims for their products unless they can show that the products’ final assembly or processing – and all significant processing – take place in the United States, and that all or virtually all ingredients or components of the product are made and sourced in the U.S. (In FTC parlance, an “unqualified claim” is a representation without caveats or limitations.) Any qualified Made in USA claims must include a clear and conspicuous disclosure about the extent to which the product contains foreign parts, ingredients, or processing.

The settlement is the latest in a growing line of FTC cases challenging “selfie seals” – allegedly deceptive certifications that aren’t supported by objective criteria. In addition to substantiating their Made in USA claims, companies should exercise care when using certifications that could leave consumers with a deceptive impression of what the seal stands for. (Read Complying with the Made in USA Standard and the FTC’s Endorsement Guides for more information.)

The FTC is accepting public comments about the proposed settlement until February 23, 2018.

Ralph S
Where is the fine, or disgorge of improper profits? Has the FTC fined this company, or at least forwarded the complaint to the Justice Dept? Without a fine there would seem to be absolutely no hinderance to someone else doing the same exact thing. It was clearly a profitable venture for them.
Lee W.
i know this company makes products tht are not made in the usa, where do i report them?
lfair

In reply to i know this company makes by Lee W.

People can report deception in the marketplace -- including misleading Made in USA claims -- with the FTC's Complaint Assistant.  It takes just a few minutes and your report will be available to law enforcement agencies across the country.  Thank you.

Jennifer B
Why bother reporting companies that misrepresent that their items are made in the USA. The FTC doesn't fine them- just a slap on the wrist. Weak regulation.