Refundamentals: How the FTC returns billions to consumers

You’ve seen the sentence in FTC news releases or blog posts: “The order includes a $__ million financial remedy.” So how do provisions like that translate into real help for real consumers? That’s the subject of the FTC Bureau of Consumer Protection’s Office of Claims and Refunds Annual Report. 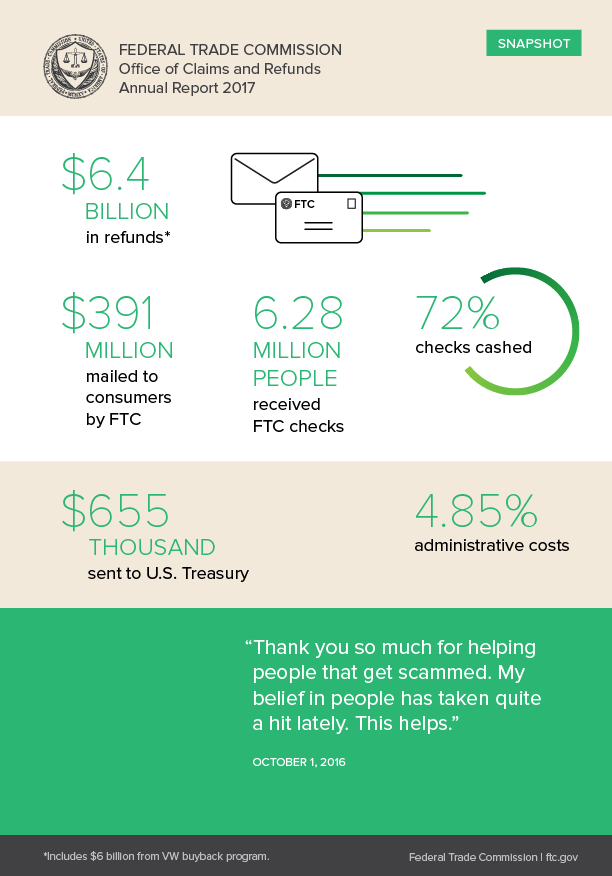 Covering the period between July 1, 2016 and June 30, 2017, the Report recaps how FTC cases resulted in orders that returned billions back to consumers. It also offers insights into what happens once those orders are in place.

The task of getting refunds to the right people is a painstaking process. Who’s eligible for a refund? How do we locate those people? How do we determine how the available cash will be divided among them? How do we get checks to eligible consumers while outwitting fraudsters who may try to subvert our efforts? The Report addresses those questions – and more.

In total, during the 12-month period covered by the Report, FTC cases resulted in more than $6.4 billion in refunds for consumers. Some orders required the defendants to send the refunds. That $6.4 billion figure includes a landmark settlement with Volkswagen that required the company to offer a buyback program for owners of VW and Audi diesel cars fitted with illegal emissions defeat devices.

In other cases, the FTC sent money directly to consumers. You’ll want to read the Report for details, but here are some notable statistics about refund programs administered by the FTC between July 2016 and June 2017:

While we’re on the subject of refunds, we hear two questions pretty frequently. First, what percentage of financial judgments does the FTC keep for its future operations? That’s easy: Zero, zip, nada, bupkes. Second, what happens if there’s money left over after a refund program or if there isn’t enough to provide meaningful refunds to individual consumers? In those instances, the FTC sends the money to the U.S. Treasury, where it goes into the General Fund. In other words, we never forget that the money belongs to consumers, so we’re duty-bound to do our job carefully and efficiently.

The dollar amounts in the Report don’t include the portion of judgments that were suspended by courts due to defendants’ inability to pay. But those orders always include provisions requiring defendants to change their ways. And it’s not unusual for the FTC to ask a court to reinstate the full amount if it looks like defendants lied about their finances.

The Report also includes some quotes from The Boss – the consumers we’re honored to work for:

I am one of the many plaintiffs in the John Beck law suit waiting since 2009 for a final settlement in this law suit. This lawsuit has dragged on far to long! When Will this legal proceeding come to final completion??

How do I receive my refund for the Snuggie I purchased?

I am one of the victim of MOBE . I purchased a Silver Masterclass last September 3,2017 . I have'nt started yet this Online business education until MObE shutdown . I am a single mother with two children and a LUPUS patient . I hope and pray that i can get a refund . I don't know where and what to do.. Anyone can help i am extending my heartfelt thanks. God bless us..Thank you!

I am 85 years old. My husband and my youngest son are disabled and I am their caregiver. My social security does not pay the bills. I invested $60509.77 in Mobe for platinum and other necessary expenses necessary to do the business. This was all from credit card balance transfers & purchases. I have no more credit. It is refunds or bankrupsy.

I received a letter stating I have a balance on my card and to request a refund. I have called and put on hold for over 45 minutes and am not sure how to do this via internet as it says it's not available

How do find if I'm eligible for a refund?

Often, the FTC can use the records of a business to find people who are eligible for a refund. Other times, people have to apply for a refund.

The FTC has a list of cases that are giving refunds at FTC.gov/Refunds. The list has a telephone number you can call to ask about the refund for each case.

2007 I was a victim of John beck he got from me 17,000 do any one know how I can Get my money back or if there’s any stories about any of the victims getting their money back I just came crosses article please help

The FTC has a list of cases that are giving refunds at FTC.gov/Refunds. The list has a telephone number you can call to ask about the refund for each case. You could look FTC.gov/Refunds if you think the FTC had a case that involved that person or a business he was involved in.

Where here’s a doozy, how does the FTC figure out who were the kids’ privacy that was broken by Google and Facebook? Is there a way? If not where does that $170 million go?

The $170 million judgment goes to the U.S. Treasury and the State of New York. Read more in a blog about the $170 Million FTC-NY YouTube Settlement.