It’s a “tale as old as time.” But unlike Beauty and the Beast, in the online version, the transformation often goes in the opposite direction with the entrancing lover ultimately revealed to be a monster. Of course, everyone knows at least one Romance of the Century that began online. However, people may be reticent to reveal the episodes that led to heartbreak, identity fake, and wallet take. As Valentine’s Day approaches, your BFFs at the FTC say it’s time to take off the rose-colored glasses and consider some sobering stats.

According to a new FTC Data Spotlight, in the past five years, people have reported losing a staggering $1.3 billion to romance scams – more than any other FTC fraud category. Reported losses in 2021 hit a record $547 million, which is more than six times the reported losses in 2017. With median individual losses last year of $2,400, it’s not just a matter of flowers and candy.

MYTH #1: “I’m not on a dating app, so I don’t need to worry about romance scams.” Untrue. Many people who have been stung by scammers weren’t looking for love. More than a third of people who told us they lost money to an online romance scam in 2021 said it began not on a dating site, but on Facebook or Instagram. Of course, it’s flattering when an intriguing stranger slides into your DMs or claims to admire a photo. Just know that social media is a common entry point for catfishing and con artists.

MYTH #2: “My online love is working abroad as a doctor (or in the military or on an oil rig), so we haven’t been able to meet.” Don’t buy the heartstring-tugging tale of the lonely person stationed overseas, the business owner stranded in a foreign country, or the single parent with the sick kid. Romance scammers are pros at creating fake social media profiles complete with someone else’s photos and a sympathetic – but totally bogus – back story to explain their IRL elusiveness or their need for cash.

MYTH #3: “ I’m too young (or too old) for this. Romance scammers target people my parents’ (or my kids’) age.” According to the Data Spotlight, reports about romance scams increased for every age group in 2021. The increase was most striking for people between 18 and 29, but the reported median dollar loss rose with age. People in the younger bracket reported individual median losses of about $750, compared to people in the young-at-heart 70+ bracket reporting individual median losses of $9,000. The bad news is that romance scammers target people of any age, regardless of their tech savvy, business acumen, or life experience.

MYTH #4: “My cyber sweetie hasn’t asked for cash, just for help transferring funds.” For years the FTC has warned people about online loves who ask for money, wire transfers, gifts, or gift cards. So some larcenous lotharios are switching it up, claiming to need help transferring funds related to, say, an inheritance or a business deal. Their targets think they’re just fronting fees or lending a hand. In fact, they may have been set up as “mules” to facilitate money laundering.

MYTH #5: “How lucky am I?! My social media steady just clued me in about a terrific investment opportunity.” People dabbling in virtual dating shouldn’t mix romance and finance. In particular, any link between online love and cryptocurrency should set off alarms. Some keyboard Casanovas insist on cryptocurrency as a payment method, while others claim to be in-the-know financiers with the inside track on a crypto-related “investment opportunity.” When people follow the advice, their wallets and spirits are left flat. According to another FTC Data Spotlight, reports of investment scams soared in 2021 – and many of them used romance as the hook and cryptocurrency as the bait.

Help stop scammers by reporting suspicious profiles or messages to the dating app or social media platform where you spotted them. Then tell the FTC at ReportFraud.ftc.gov. Learn more at ftc.gov/romancescams. 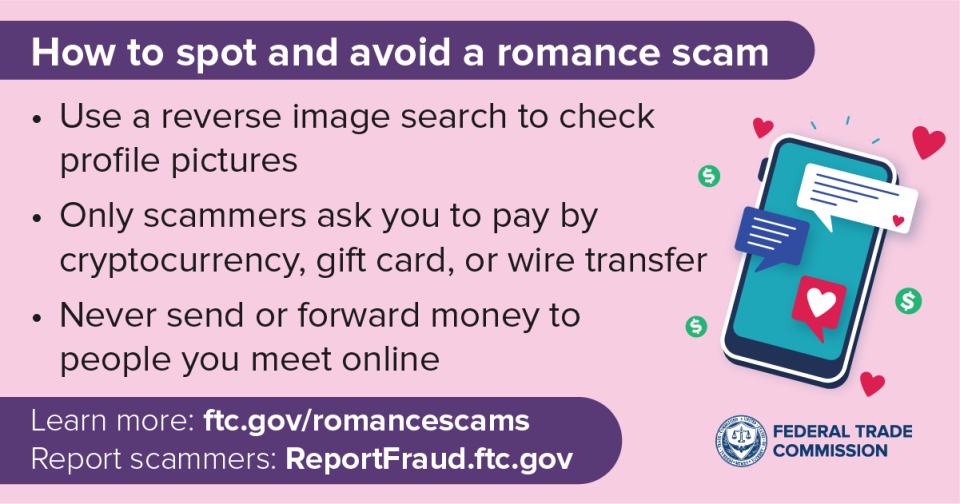