If you say you’re better, you’d better be better – and you’d better have appropriate proof to back up that claim. That’s a takeaway tip for businesses from the FTC’s proposed settlement with Federal-Mogul Motorparts, LLC. 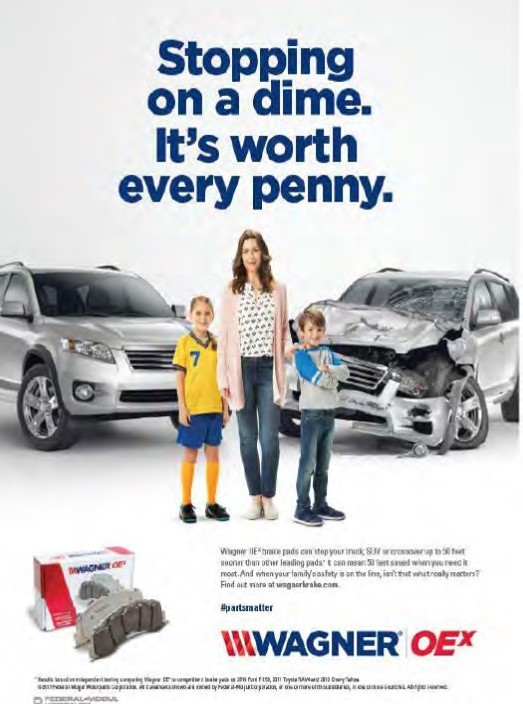 Why should consumers buy Wagner OEx brake pads and why should auto parts retailers and repair shops sell and install them? According to Federal-Mogul’s TV, print, and online ads, it boiled down to performance superior to its competitors. For example, one TV ad showed two women driving SUVs. When a truck cuts them both off, one SUV crashes. In the other SUV, a mom with kids in the car does that right-arm-blocking-the-passenger-seat parental move, but avoids the accident. With a look of relief on the woman’s face, a narrator says, “Wagner OEx brake pads can stop you up to 50 feet sooner. Do you know what’s on your vehicle?”

A print ad showed a mom with kids standing in front of two SUVs – one with a crushed front end and the other unscathed. The ad read: “Wagner OEx brake pads can stop your truck, SUV, or crossover up to 50 feet sooner than other leading pads.* It can mean 50 feet saved when you need it most. And when you family’s safety is on the line, isn’t that what really matters?’

Through those ads and others, the FTC says Federal-Mogul conveyed to consumers that in an emergency, when a driver is trying to stop in the shortest distance possible, Wagner OEx brake pads will stop a crossover, SUV, or pickup truck up to 50 feet sooner than competing brake pads. What’s more, when compared to competing products, Federal-Mogul represented that the OEx brake pads will significantly reduce the risk of collisions.

But according to the complaint, those were unsubstantiated claims. Although Federal-Mogul hired an independent third party to test Wagner OEx brake pads against competing aftermarket products, the FTC says the protocol didn’t accurately reflect consumers’ real-world use. For example, the industry standard test – known as the “best-effort” stop – directs the driver to press down hard on the brake pedal to simulate how people are likely to respond to the kind of emergency shown in Federal-Mogul’s ads. However, Federal-Mogul’s test had drivers apply constant and relatively light pressure. In addition, the protocol tested brakes at hotter than normal temperatures – a condition that produces longer stopping distances.

What’s the message for other marketers? Comparative safety claims can be highly material to consumers, especially for products people can’t evaluate for themselves. When making express or implied representations – especially if you’re saying your product is objectively superior to competitors – don’t put the pedal to the metal unless you have sound proof. Furthermore, the case should remind advertisers that the FTC will take a close look at testing protocols. Companies should make sure their tests reflect real-world conditions.