The scheme started with a Craigslist ad for a rental property and ended with a $5.2 million judgment for violations of the FTC Act, the Restore Online Shoppers’ Confidence Act, the Fair Credit Reporting Act, and the Free Annual File Disclosures Rule. For a deep dive into FTC fundamentals, read the opinion granting the FTC’s Motion for Summary Judgment against Credit Bureau Center. 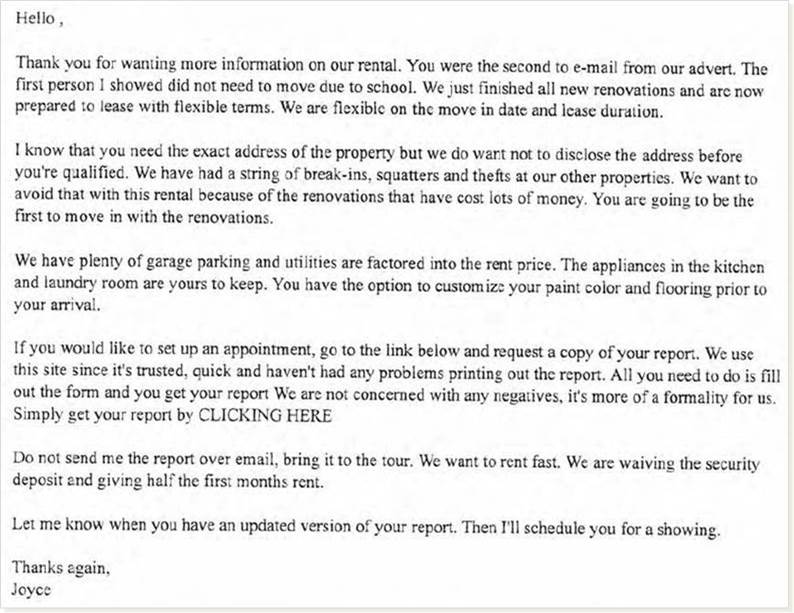 For consumers browsing Craigslist, ads for a rental apartment in a prestigious building were sure to catch their eye. When consumers emailed for details, the deal got even sweeter. The “landlord” (in the example cited by the Court, her name was “Joyce”) responded with a chatty message about garage parking, new appliances, custom flooring, and other amenities that had consumers reaching for the corrugated boxes and strapping tape. However, Joyce was hesitant to give the prospective renter a tour “until you’re qualified” – meaning the person first had to get their credit report.

Helpful gal that Joyce was, she included a link in her email to a “trusted, quick” source: “All you need to do is fill out the form and you get your report.” Joyce assured the consumer that the report was “more of a formality for us” because “we are not concerned with any negatives.” “Simply get your report by CLICKING HERE.”

But once people got their credit report from the site, Joyce ghosted. That’s because there was no rental property.

There was no landlord.

And there was no Joyce.

In fact, the “rental” was simply a charade to drive traffic to sites owned by defendants Credit Bureau Center (formerly Myscore LLC) and owner Michael Brown, who used the would-be renters’ one-time request for a credit report to enroll them without their permission in credit monitoring services and make unauthorized monthly charges of $29.94 to their credit cards. The rental scheme was the work of affiliate marketers, who were paid per click by – and with the knowledge of – defendants Credit Bureau Center and Brown. (Last year the FTC reached a $762,000 settlement with affiliates Danny Pierce and Andrew Lloyd.)

Here are just a few quotable quotes from the opinion.

The Court held that the Craigslist scheme “was rife with material misrepresentations that were likely to deceive a reasonable consumer.” Although Credit Bureau Center and Brown initially argued they couldn’t be held liable for their affiliates’ actions, they ultimately conceded that they “ratified” their affiliates’ conduct “by accepting the benefits of their efforts.” But even if they hadn’t made that concession, the Court concluded that the defendants were “aware of the Craigslist scheme but continued to accept the traffic (and revenues) generated by that conduct.”

If you’re looking for insights into how a judge evaluates online disclosures – wording, placement, size, color, etc. – this is a great opinion to read. Despite the defendants’ reliance on fine-print statements, “courts routinely hold that explanatory text is insufficient to cure a misleading description unless the text changes the overall impression.” After conducting a detailed analysis, the Court ruled, “Here, the net impression is that consumers are signing up to obtain a free credit score, not enrolling into a costly monthly service.”

In an attempt to counter the FTC’s argument that the company’s high chargeback rate was indicative of deception, the defendants unsuccessfully tried to turn that around on consumers. As the Court described it, “The defendants propose a different inference: that all of these customers were engaged in ‘friendly fraud,’ in which they purposefully signed up [for] CBC’s services and then falsely claimed deception in order to get out of paying for the membership services for which they had enrolled.” The Court rejected that interpretation and held that even if some consumers knew of the credit monitoring service, “[T]he requirement is not that ‘every customer’ was deceived by the defendant, just ‘that some customers actually misunderstood the thrust of the message.’”

The Court paid particular attention to ROSCA’s requirement that the seller “clearly and conspicuously” disclose to the consumer “all material terms of the transaction.” Citing precedent that text “buried in fine print” or “stated in separate Terms and Conditions documents” is legally insufficient, the Court also rejected the defendants’ argument that twelve-point font was necessarily clear and conspicuous: “[T]he analysis of the disclosure is necessarily contextual, meaning that the Court must consider the text, whatever size it is, in relation to the other elements on the page.”

Credit Bureau Center’s owner Michael Brown theorized that he should not be held personally liable for the acts of the corporation. Quoting the standard in FTC v. Amy Travel, the Court rejected that argument. Among other evidence, the Court cited the fact that Brown wrote, edited, and controlled the company’s websites. With regard to the affiliates’ bogus rental ads, Brown was “at the very least, recklessly indifferent towards or intentionally ignorant of the truth.”

The defendants offered an “array of arguments” against the imposition of a financial remedy in this case, legal theories that have been rejected by other courts. This Court was similarly unpersuaded. Just one example: “CBC and Brown also ask the Court to set off business expenses and the loss of CBC revenues. But restitution seeks to protect consumers from ‘economic injuries’ by recovering the full amount of consumer loss. The Court does not think it appropriate to reduce consumer recovery in order to compensate the defendants for the costs of administering a service that relied upon misrepresentations to consumers.”

The order in this case applies just to the defendants, but it contains several noteworthy provisions tailored to the violations.