Why are you mumbling?
The TV is not too loud!
What did you say? This restaurant is like Grand Central Station.

For millions of Americans, an unwelcome “I’m turning into my parents” milestone is noticing that conversations aren’t as clear as they used to be. Hearing aids can be pricey though and aren’t covered by traditional Medicare or most insurance. Three related Florida businesses stepped into the marketplace with MSA 30X, a device advertised on TV and elsewhere with the promise that it was “independently tested to help you hear up to 30 times better.” But according to the FTC, the defendants amped up their claims well beyond what they could prove. 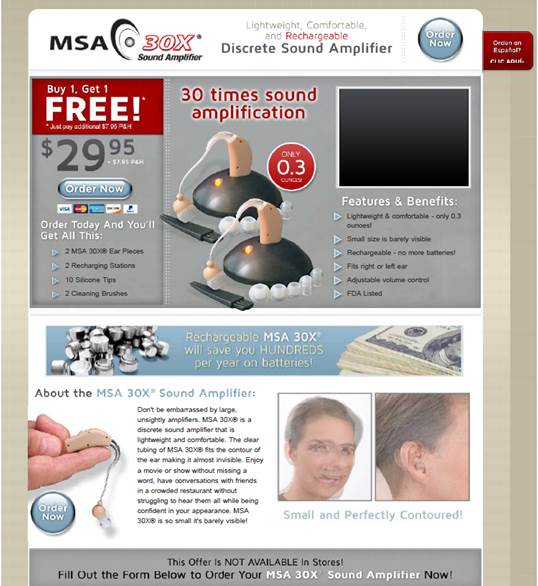 Advertised in English and Spanish and selling for about $30, MSA 30X is a small, rechargeable, wearable sound amplifier. The defendants’ ads showed older consumers expressing frustration with having to jack up the volume on the TV or not hearing clearly in crowded rooms. According to the company’s website, “Enjoy a movie or show without missing a word, have conversations with friends in a crowded restaurant without struggling to hear them all while being confident in your appearance.”

But according to the FTC, the company didn’t have appropriate proof to support their claims that with the MSA 30X, people who have trouble hearing will hear clearly when watching TV at a moderate volume and won’t miss a word at the movies or in places like restaurants. What about the company’s representation that the product was “independently tested to help you hear up to 30 times better”? Flat-out false, says the FTC.

To settle the case, the defendants have agreed to an order that will require them to have human clinical testing to support future representations similar to the claims challenged in the complaint. Other statements about the efficacy of any device will require competent and reliable scientific evidence. Due to the defendants’ financial condition, the judgment of $47 million will be suspended upon the payment of $500,000. (If the defendants have misrepresented their financial status in any material way, the FTC can ask the Court to reinstate the entire judgment.)

Looking for compliance tips? Lend us your ears.

Support your claims with sound science. The defendants said MSA 30X had been “independently tested to help you hear up to 30 times better.” It’s FTC Law 101 that advertisers must have “at least the advertised level of substantiation.” But even if companies don’t make what the FTC calls establishment claims – statements about the kind of scientific support you have to back up your representations – they still need methodologically sound proof to support the kind of claims the defendants made in this case.

Avoid the visual equivalent of whispered “disclaimers.” Some of the defendants’ ads contained small print that said, “The MSA 30X Sound Amplifier is not a substitute for a hearing aid or intended for use by hearing impaired people. The FDA advises anyone who suspects hearing loss to seek evaluation by a health care professional.” And yet the ads featured grey-haired models “frustrated with [their] hearing” who complained about devices with batteries that were “always such a pain to change and so costly.” The FTC looks to the net impression that members of the target audience take from an ad. Companies can’t expect a brief visual or small print to undo the claims they hammer home in the rest of the ad.

Boomer has it. If you’ve noticed that the FTC is bringing more cases addressing cognition, joint pain, and other maladies affecting Consumers of a Certain Age, it’s because we go where the marketplace is going. Some companies track the trendy teens, but let’s face it: Baby boomers have the bucks and are looking for answers to chronic health considerations. Advertisers eager to appeal to that demographic need to remember that established truth-in-advertising principles apply.

Guy Lanza
I applaud the hard work of the FTC in this case and others like it. I have noticed, however, that payment of every judgment obtained was suspended because of the company’s financial condition. In this case, a $47 million judgment resulted in the payment of only $500,000. Correct me if I’m wrong, but it seems to me that until the FTC can go after the principals involved (those who profited from the enterprise), companies selling garbage based on false claims will continue to pop-up faster than the FTC can shut them down in a never-ending game of Whack-A-Mole. What’s to stop an unscrupulous person from forming a corporation to sell a useless product to take advantage of an unfulfilled need created by a lack of legitimate remedies? By the time the false claims come to light and the FTC shuts them down, the principals will have made millions by siphoning all the money out of the company with salaries and bonuses, etc. When the FTC obtains its judgment, it remains unpaid because of the company’s “financial condition” while the individuals responsible for it walk away with millions. Am I mission something here?
Jane Doe
I'm not sure i understand what's going on. I tried the product and it works for me. I'm hearing impaired. While i know not to substitute for a hearing aid (which i'm waiting on,) but until i get a new one, this works for me for now. I am in no way promoting the product i'm jsut confused why FTC doesn't think it works.
mstech2k
How do we get a refund?
Bill Scholly

In reply to How do we get a refund? by mstech2k

Purchased a MSA 30x , about $20 with tax. Did not expect a lot but wanted an emergency back up when my regular hearing aid has been misplaced or being repaired. I understood this item is NOT a hearing aid. They are clear it is a "sound amplifier". But it is totally, completely, absolutely and utterly worthless. It does Amplify sounds ALL sounds. Wind, rain on car roof, other people talking, silver ware rattling, electric pencil sharpener sounds like coal fired RR engine. It is sad that the packaging notes "Women Owned" , this product could be giving female entrepreneurs a bad name.
Guest
If this product is not for the "hearing impaired", will it damage my hearing by using it?