Billions back to consumers for VW’s false “clean diesel” claims

The FTC just announced a partial settlement with Volkswagen Group of America that will return as much as $10 billion to owners and lessees of VW and Audi 2.0 liter diesel cars. As the largest false advertising case in FTC history, it’s a record-breaking win for consumers – and it’s in keeping with the law-breaking nature of the deception the FTC alleged in its lawsuit against VW.

“Clean diesel” was the focus of Volkswagen’s massive marketing campaign pitching its vehicles as an attractive option for environmentally-conscious car buyers. But according to the FTC, VW scored those emissions numbers by installing in each car a “defeat device” that cheated on testing.

In a related partial settlement with the U.S. Department of Justice and California Attorney General, Volkswagen will spend an another $4.7 billion to mitigate pollution and invest in the increased use of zero-emissions cars. That portion of the case stems from charges by the U.S. Environmental Protection Agency and the California Air Resources Board (CARB) that Volkswagen violated the Clean Air Act and the California Health and Safety Code.

What will owners and lessees of affected VWs and Audis get under the settlement? They’ll have their choice of: 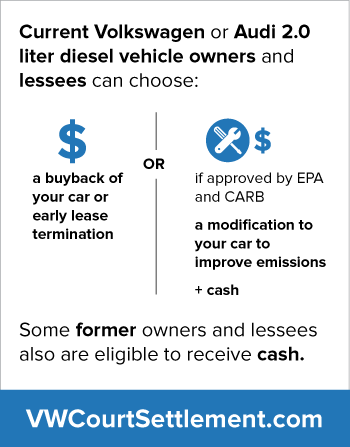 Right now, consumers can use these charts to estimate how much they’ll get:

Owners and lessees should visit VWCourtSettlement.com, enter their Vehicle Identification Number (VIN) to see if their car qualifies, and bookmark the site for updates.

After the settlements are approved by the Court, Volkswagen and the attorneys representing owners and lessees will mail eligible consumers an information packet. The exact dollar amount of each buyback will depend on things like the model, year, style, mileage, and options – but consumers will be offered more than the current value of the car to compensate them for VW’s false advertising. Those who opt for a modification will also get a compensation payment.

If you have clients who own affected cars, they don’t have to make a decision now. But they should watch their mail for a large envelope and visit VWCourtSettlement.com regularly for updates. Consumers also can call 844-98-CLAIM.

With settlements totaling in the multi-billions, it’s hard to imagine that a case could convey a more important big-picture message for advertisers, but we think there is one: Companies owe consumers the truth. The FTC will use the legal tools at its disposal – and will work cooperatively with federal and state agencies and those representing individual consumers – to see that advertisers live up to that obligation.