In Fat Giraffe Marketing’s ads, truth was the endangered species

The name of the case is FTC v. Fat Giraffe Marketing Group, but the lawsuit has nothing to do with obesity, giraffes, or obese giraffes. OK, perhaps there are some similarities in the sense that the defendants made oversized claims, told tales as tall as tree-topping ungulates, and used protective coloration – in this case, bogus endorsements – to camouflage what they were up to.

Fat Giraffe Marketing, four related Utah-based corporations, Gregory W. Anderson, and Garrett P. Robins marketed money-making opportunities, claiming that people could rake in cash from the comfort of their homes simply by posting advertising links on websites. How much money? According to the ads, a lot: “Mom Makes $7,487/Month And You Won’t Believe How She Does It!” and “If You Can Spare 60 Minutes A Day, We Can Offer You A Certified, Proven And Guaranteed Home Job To Make Up To $379/Day From Home!” The names of the programs changed over time – Excel Cash Flow, Online Cash Commission, Cash From Home, etc. – but they all resonated with the cha-ching of work-from-home riches.

Speaking of cha-ching, the defendants paid millions to affiliate networks to drive traffic to their sites. When a hyperlink in one of the ads resulted in a sale, the affiliate network made money and passed along a portion to the individual affiliate marketer who placed the ad. 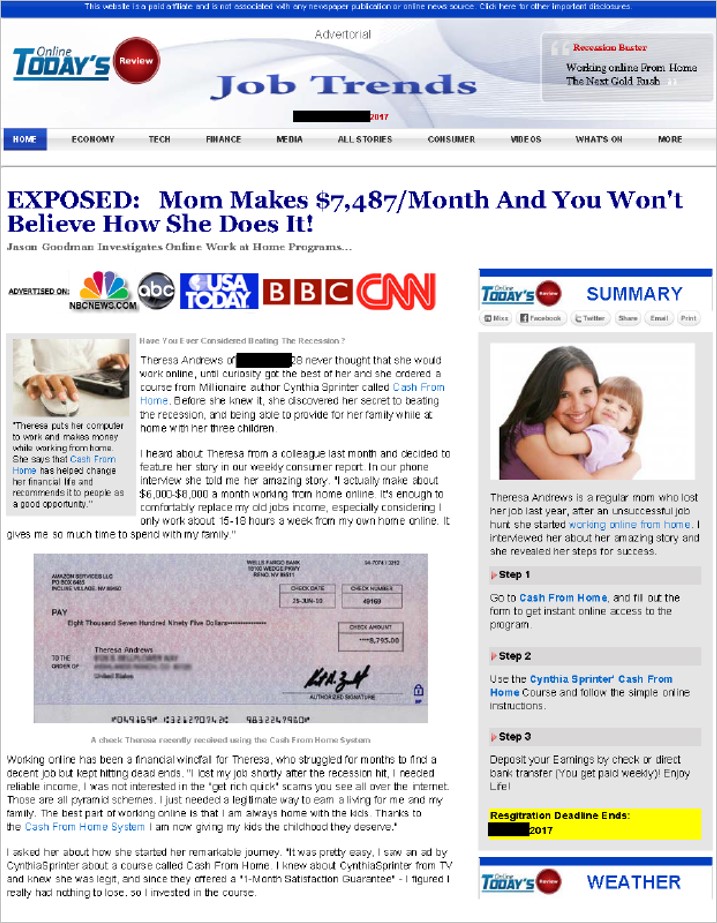 You’ll want to read the complaint for details of the different ways the defendants pitched their products, but one method was through what looked to be online blogs or articles that bore the logos of news organizations like ABC, BBC, CNN, NBC, and USA Today. Those bylined “articles” – which claimed to “investigate online work at home programs” – told the story of “Theresa Andrews” who supposedly used the defendants’ Cash From Home course to earn between $6000 and $8000 a month simply by placing links for a few hours each day. In addition to a warning about “the ‘get rich quick’ scams you see all over the internet,” the article was followed by comments from “readers” who claimed to have earned money using the same program.

Consumers who clicked on links were taken to another page that featured this call to action: “URGENT UPDATE: Recently this work at home opportunity has received a lot of national media attention. All positions for this program are filling up quickly. To secure a position you must act now!” Those pages featured the success story of “single mother Cynthia Sprinter” who joined the defendants’ program and became a millionaire. Consumers also were promised “A Free One-On-One Consultation with an Internet Wealth Expert!”

Consumers who paid $97 to join were then taken to a “Members’ Area” page, ostensibly to get the promised program. In addition, they were directed “to call our office and get in touch with one of our startup experts in order to get an in-depth personal assessment” so they “could get started with the assistance of a Business Coach and achieve rapid results.”

So what about those big-money promises, that independent “investigation” into the Cash From Home course, Theresa Andrews’ earnings claims, the chorus of enthusiastic commenters, and the success story of millionaire Cynthia Sprinter? According to the FTC: fake, fake, fake, fake, and fake. Even the nature of the product was bogus, says the FTC. Rather than a lucrative job adding links to websites, all buyers got was access to E-Commerce 101 videos about basics like affiliate marketing or drop shipping.

When buyers called for that consultation, they were really talking to “telemarketing floors,” telemarketers in cahoots with the defendants who tried to upsell even pricier business opportunities sold by other companies, including Internet Teaching and Training Specialists, an outfit sued by the FTC. (By the way, those telemarketing floors were way more than a sideline. According to the complaint, the defendants took in almost twice as much money from telemarketing floor referrals than they made from what consumers paid to join the Cash From Home program.)

The settlement bans the defendants for life from marketing any business opportunity or business coaching service. The order also prohibits violations of the Telemarketing Sales Rule and a host of other illegal practices. In addition, the order imposes a financial judgment of more than $10 million which, due to the defendants’ financial condition, will be suspended once they turn over substantially all their remaining assets.

What can others learn from the case?

There’s no business like “know” business. The complaint also alleges violations of Business Opportunity Rule provisions regarding earnings claims and required disclosures. In-the-know marketers know to read Selling a Work-at-Home or Other Business Opportunity? Revised Rule May Apply to You for the dos and don’ts.

Invest your time in a TSR refresher. The Telemarketing Sales Rule includes exacting provisions when an “investment opportunity” is involved. The Rule defines that as “anything, tangible or intangible, that is offered, offered for sale, sold, or traded based wholly or in part on representations, either express or implied, about past, present, or future income, profit, or appreciation.” If what you sell falls within that broad definition, pay special attention to TSR compliance.

Does your ad make a declaration of independence? It’s illegal under the FTC Act to falsely claim or suggest that endorsements reflect the independent opinions of impartial reviewers. Don’t disguise marketing claims as editorial content, consumer testimonials, or user-generated comments.