There isn’t an actual procedure called an honest-ectomy. But when you hear allegations about scammers who solicit donations for veterans’ charities and then pocket the contributions, you’ve got to wonder. The FTC, 54 Attorneys General from all 50 states, the District of Columbia, American Samoa, Guam, and Puerto Rico, and 16 additional state agencies that oversee charities have joined forces to announce Operation Donate with Honor – a coordinated effort to target fraudulent and deceptive fundraising for military and veterans causes. As part of the initiative, the FTC has published tips for businesses and new resources to help ensure your corporate and individual contributions truly benefit servicemembers and vets.

One striking feature of the more than 100 actions announced as part of Operation Donate with Honor is the breadth of the alleged illegality. Some operators claimed to be collecting for homeless or disabled vets and then simply kept the cash. Others spent the lion’s share on their own salaries and to hire for-profit fundraisers. In other examples, “charities” claimed to raise funds to send care packages or phone cards to deployed troops only to spend pennies for that purpose. The defendants duped donors in a variety of ways, including misleading door-to-door campaigns and solicitations outside stores, bogus raffles, deceptive direct mail, illegal telemarketing, and false statements on websites.

The FTC announced two cases as part of Operation Donate with Honor.

Florida-based Neil G. “Paul” Paulson, Sr., and Help the Vets, Inc., settled charges brought by the FTC, Florida, California, Maryland, Minnesota, Ohio and Oregon alleging that the defendants collected more than $20 million by falsely claiming that donations would help veterans in need. What really happened to the millions that people donated to Help the Vets directly and through names like American Disabled Veterans Foundation, Military Families of America, Veterans Emergency Blood Bank, and Veterans Fighting Breast Cancer? According to the complaint, it went to Paulson and to the for-profit fundraisers that Help the Vets hired. Unlike bona fide charities with independent governance, Paulson’s mother, son, brother, brother-in-law, and family friends served on the Help the Vets board. The FTC alleges that between 2014 and 2016 Help the Vets spent 95% of donors’ contributions to pay Paulson, for-profit fundraisers, and overhead expenses.
What about the “medical services” Help the Vets claimed to fund for amputees and seriously wounded servicemembers? According to the complaint, that consisted of vouchers for chiropractic treatment redeemable at one clinic in Winter Garden, Florida. Between 2013 and July 2017, at most five of those vouchers were redeemed. How many were actually used by veterans in need? Help the Vets has no idea.
Help the Vets also asked for donations to “HELP US PREVENT SUICIDE BY DONATING TO OUR 24-7 SUICIDE PREVENTION HOTLINE!” But the FTC says that “hotline” was, in fact, Paulson’s personal cell phone. His purported expertise in the sensitive task of suicide prevention consisted of an undergraduate degree in psychology and some “post-graduate course work.”
People also donated to support Help the Vets’ “therapeutic retreats” so servicemembers can “adjust back into their family life.” The FTC says those “retreats” consisted primarily of vouchers for Mexican timeshares. According to the provider of the vouchers, since 2013 only two Help the Vets’ vouchers were redeemed. One of those was used by a veteran who was on the Help the Vets board and is currently the board president.
In addition, Help the Vets asked for money to provide “mammography, surgery, chemotherapy and follow up care” for veterans with breast cancer. But the FTC alleges that despite raising over $776,000 for that purpose, Help the Vets didn’t make a single grant to a veteran fighting the disease. Its largest donation in any way related to breast cancer was an $18,000 “grant” to the Breast Cancer Outreach Foundation – another “charity” run by Paulson.
The lawsuit charges Paulson and Help the Vets with violating the FTC Act, the Telemarketing Sales Rule, and state law. The proposed settlement imposes a $20,405,287 judgment, which represents consumers’ donations from 2014 through 2017. The judgment will be partially suspended when Paulson pays $1.75 million – more than double what he was paid by Help the Vets – and the corporate defendant pays $72,000, which represents all its remaining funds. Where will that money go? Ultimately it will be contributed to one or more legitimate charities recommended by the plaintiff states and approved by the court. To ensure that Help the Vets’ donors aren’t victimized again, Help the Vets and Paulson must destroy their donor lists and direct their fundraisers to destroy them, too. Paulson also is banned for life from charity management, paid charitable fundraising, and oversight of charitable assets.

In a second Operation Donate with Honor action, the FTC charged Travis Deloy Peterson with making illegal robocalls to solicit donations for purported groups with names that sound like legitimate veterans’ charities – such as Veterans of America, Vehicles for Veterans, Saving Our Soldiers, Donate Your Car, Act of Valor, and Medal of Honor. You can listen to one of the millions of robocalls consumers received, but here’s a typical pitch:

If you have been thinking about donating your car, real estate, or timeshare to charity, please consider donating to Veterans of America. Donations are itemized tax deductible, and all real estate donations are deductible for full market value. We also accept most timeshares, so call us today at 1-800-669-0250. Thank you.

But according to the FTC, none of the names Peterson used in the robocalls is a real charity with tax exempt status, so donations to any of them are not tax deductible. What’s more, Peterson’s use of robocalls to ask for donations is unlawful. At the FTC’s request, a federal judge in Utah has issued a temporary restraining order prohibiting Peterson from placing unlawful robocalls or making misrepresentations about charitable donations while the case is proceeding. 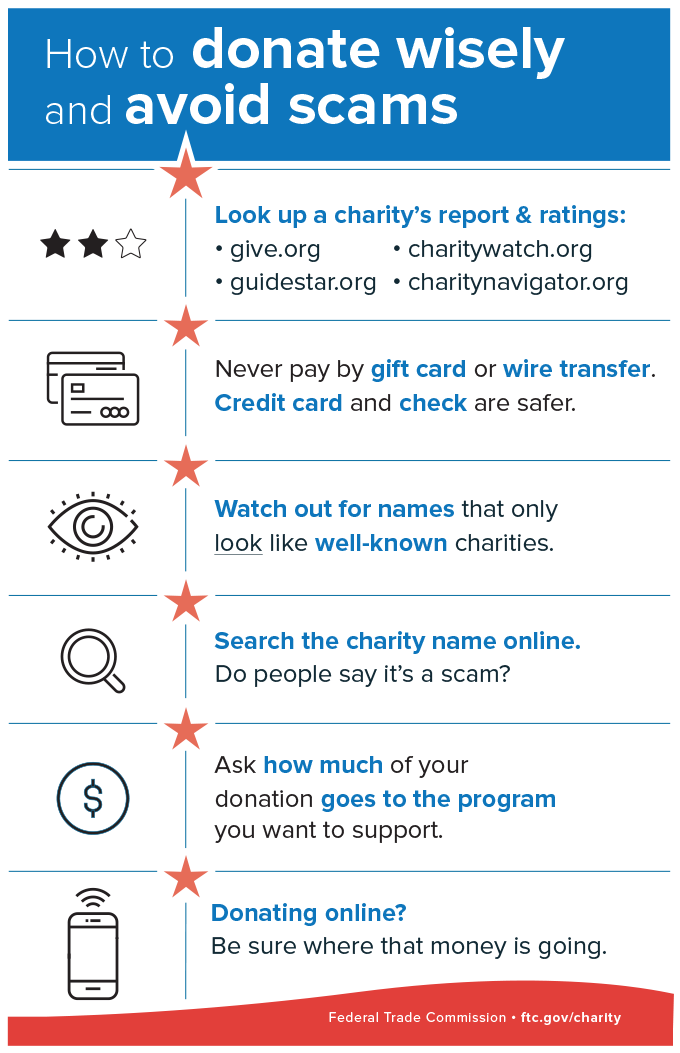 Resources for your business

Despite the allegations in Operation Donate with Honor actions, there are many reputable charities – including charities devoted to veterans and members of the military – that are deserving of support. The FTC and its partners, including the National Association of State Charity Officials (NASCO), have tips and a new video available at www.ftc.gov/charity to help individuals and businesses give wisely:

Apart from your personal donations, your business is often approached for charitable contributions, too. You want your donations to go to reputable non-profits, and you want to avoid inadvertently associating your company with a questionable fundraising campaign. That’s why the FTC has two new publications specifically for the business community:

Take a few minutes now to watch the new video and hear what two veterans have to say on the subject. And share tips with your social network to help ensure that contributions – including donations to groups serving servicemembers and veterans in need – go to the many reputable charities worthy of your generosity.