Pulleys pushed with deceptive Made in USA claims

According to a settlement announced by the FTC, a Texas-based company used misleading Made in USA claims to push its pulleys. Read on for an ironic object lesson related to a specific pulley component engraved with the phrase “Made in USA.” 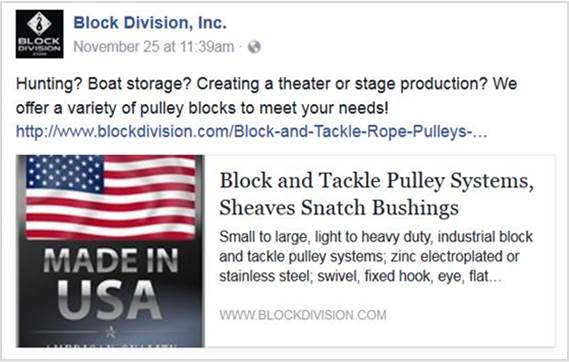 Among other things, Block Division, Inc., sells metal pulleys for industrial use – for example, to lift boats, operate overhead doors, or move theatrical scenery. The company advertises its products online, in stores, at trade shows, in print, and through social media. Its promotions often used text and graphics to convey a “Made in USA” message.

The FTC says those claims conveyed to buyers that the items were all or virtually all made in the United States. But according to the complaint, many of Block Division’s products incorporated significant parts essential to their function that were actually imported from another country.

And here’s the ironic part. For several years, some of the company’s pulleys included steel plates that entered the United States from overseas already stamped with the phrase “Made in USA.” 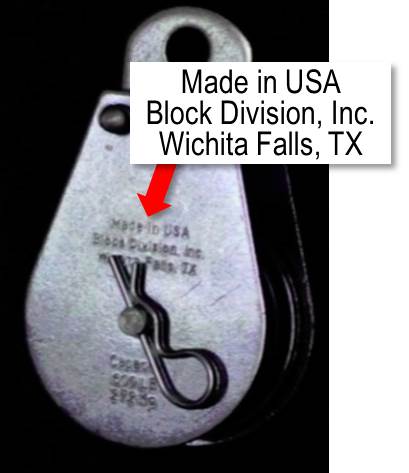 The order allows Block Division to make what the FTC calls “qualified” U.S. origin claims – claims that are limited in their applicability. But in that case, “a clear and conspicuous qualification” must appear “immediately adjacent to the representation that accurately conveys the extent to which the product contains foreign parts, ingredients, and/or processing.”  (The order also includes a detailed definition of what “clear and conspicuous” means in this context.)

The FTC is accepting online comments about the proposed settlement until April 7, 2017.

What’s the lowdown for businesses? Like any other objective product representation, your “Made in USA” claims must be truthful and you must have a “reasonable basis” – evidence in hand – before you make them.

Read Complying with the Made in USA Standard for more information.