Shining a light on misleading claims in auto ads

People usually think of beacons as radiant lights that attract attention. But the FTC has charged that two Ohio auto dealers (among other things) used the word in a way that kept consumers in the dark.

Ads for Progressive Chevrolet Company and Progressive Motors prominently claimed “Sign & Drive Leases ZERO DOWN!!!!!!” and “ALL LEASES ARE Zip, Zero, Zilch – Nothing Down!” By our count, the companies featured one of those “z” words a total of 31 times in the ad. In addition, each picture of a vehicle was accompanied by an eye-catching cost per month. 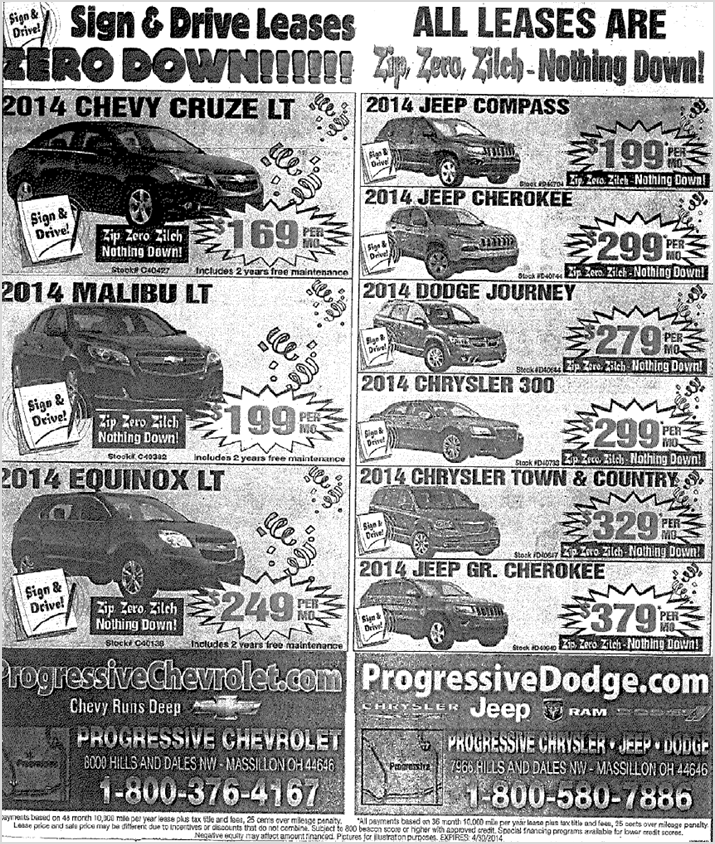 Now to shed some light on the lawsuit’s “beacon” concern. In small print at the very bottom of the ad, it said “Subject to 800 beacon score or higher.” In that context, the “beacon” in question was actually “BEACON,” one type of industry-specific credit score upon which auto financers rely.

But do consumers know their BEACON score? Do they even know what a BEACON score is? We can tell you this much. Fewer than 20% of consumers have a BEACON score of 800 or higher, the minimum required to qualify for those advertised payments and “zero” deals.

The complaint alleges that Progressive Chevrolet and Progressive Motors violated the FTC Act by representing expressly or by implication that consumers could lease the advertised autos for the down payment and monthly payment prominently featured in the ad. According to the FTC, the companies didn’t adequately disclose that few people would qualify.

The FTC also charged that the dealers violated the Consumer Leasing Act and Reg M by stating a monthly payment amount – a term that triggers certain disclosures – without providing the additional information required by law.

To settle the case, the companies have agreed not to misrepresent the cost of leasing or financing. In addition to mandating Consumer Leasing Act and Reg M compliance, the proposed order prohibits any material misrepresentation about the price, sale, financing or leasing of a vehicle. The companies are also barred from advertising a payment amount, or that any or no initial payment is required, without clearly disclosing that the transaction is a lease, the total amount due at consummation or delivery, the number of payments and their amounts and timing, whether a security deposit is required, and that there may be an extra charge at the end of the lease where the consumer’s liability (if any) is based on the difference between the vehicle’s residual value and its value at the end of the lease.

What about those sweet deals that only a select few can actually get? In the future, if the companies choose to advertise a monthly payment, periodic payment, down payment, or length of any payment term, they also have to clearly disclose all restrictions or qualifications on a person’s ability to get the advertised deal. If the ad states that consumers must meet a certain credit score to qualify for the offer and a majority of consumers aren’t likely to meet that score, the ad must clearly and conspicuously disclose that fact.

What’s the takeaway for other dealers? Clearly and conspicuously disclose material qualifications or limitations on an advertised deal. (Fineprint footnotes aren’t likely to meet that standard.) Furthermore, you’re probably safe with “zebra” and “zombie,” but exercise caution before using “zero” or one of those other “z” words without clearly explaining up front the strings that may be attached. Refer to the Business Center’s Automobiles page for compliance resources.

I was transferred a warranty. On a used car 2012.I received a recall notice on motor. Train repair,power steering,.after calling manufacturer I was told all repairs. By vin number were still under warranty and would be covered paid in full by manufacturer. After sending the car by tow truck at my expense the repair shop refused to do the work under war and is charging thousands to do the warranty. Repairs that were pre authorized by the manufacturer. I ask if only one of the recalls could be done under warranty, no,why I ask the drive train is all the same age.