Saint James Infirmary is a haunting tune recorded by jazz legends like Louis Armstrong and Cab Calloway. Saint James School of Medicine is a for-profit operation in the Caribbean run by U.S. defendants. The two don’t have much in common except for this: Both have left people feeling the blues.

In its latest challenge to illegal practices in the for-profit education sector, the FTC has charged that Park Ridge, Illinois-based Saint James School of Medicine (also doing business as Human Resources Development Services, Inc.), Kaushik Guha, and financing affiliate, Delta Financial Solutions, Inc., used misleading claims to lure students into enrolling in their medical schools. Of particular note are additional complaint allegations related to violations of the Holder Rule and the Credit Practices Rule. The $1.2 million settlement will go toward refunds for students and debt cancellation, and prescribes big changes in how the Defendants do business going forward.

The Defendants have promoted their for-profit medical schools in Anguilla and St. Vincent as lower-cost alternatives where attendees will “receive the same high-quality medical education and opportunities as US and Canadian medical schools.” But according to the complaint, they made numerous deceptive representations about students’ likelihood of success. For example, in reference to the U.S. Medical License Exam – a multi-step set of tests toward licensing – the defendants touted a “96.77% FIRST TIME USMLE STEP 1 PASS RATE.” But the FTC says that since 2017, only 35% of Saint James students who have completed the necessary coursework passed the USMLE Step 1 exam. Compare that to U.S. and Canadian medical schools, where 98% of first time USMLE Step 1 test takers in 2020 passed the exam.

The FTC alleges that another material consideration for prospective medical school applicants is the residency match rate – the percentage of medical school seniors who are accepted for residencies. Med students and program directors rank each other in order of preference and the National Residency Matching Program uses a computerized algorithm to make those matches. Reporting on the NRMP website states that in 2020, “For U.S. MD seniors, the match rate was 93.9, within the historical 92-94 percent match rate.” The FTC says the Defendants have claimed a “high match rate” of 83% or higher. In fact, since 2018, the average match rate for Saint James students has been 63% – lower than the match rate for students at U.S. medical schools and lower than what the Defendants have touted.

In addition to advertising online, via email, and through in-person meetings, the Defendants conveyed deceptive claims to many of their prospects through a high-pressure telemarketing campaign, in violation of the Telemarketing Sales Rule.

The complaint also alleges that the Defendants’ financing practices violated the Holder Rule and the Credit Practices Rule – key consumer protection provisions especially important to people and their families taking on the major financial obligation of student loans. You’ll want to read the complaint for details about Saint James School of Medicine’s intertwined relationship with its financing affiliate, Delta Financial Solutions, but here’s the summary of the alleged Rule violations. The Holder Rule protects consumers who enter into certain credit contracts by preserving their right to assert claims and defenses against any holder of the contract, even if the seller later assigns the contract to a third-party creditor. The Rule requires that the underlying contract include the following provision in at least 10 point bold type:

ANY HOLDER OF THIS CONSUMER CREDIT CONTRACT IS SUBJECT TO ALL CLAIMS AND DEFENSES WHICH THE DEBTOR COULD ASSERT AGAINST THE SELLER OF GOODS OR SERVICES OBTAINED WITH THE PROCEEDS HEREOF. RECOVERY HEREUNDER BY THE DEBTOR SHALL NOT EXCEED AMOUNTS PAID BY THE DEBTOR HEREUNDER.

The FTC says that in many cases, the Defendants’ financing contracts through its affiliate Delta Financial Solutions didn’t properly include that important protective language.

Furthermore, the Credit Practices Rule requires that before cosigners put their John Hancock on the dotted line, the creditor must inform them of their liability in a separate document and using specific wording mandated by Section 444.3(c) of the Rule:

You are being asked to guarantee this debt. Think carefully before you do. If the borrower doesn't pay the debt, you will have to. Be sure you can afford to pay if you have to, and that you want to accept this responsibility.

You may have to pay up to the full amount of the debt if the borrower does not pay. You may also have to pay late fees or collection costs, which increase this amount.

The creditor can collect this debt from you without first trying to collect from the borrower. The creditor can use the same collection methods against you that can be used against the borrower, such as suing you, garnishing your wages, etc. If this debt is ever in default, that fact may become a part of your credit record.

This notice is not the contract that makes you liable for the debt.

The purpose of that plain-language document is to make sure prospective cosigners understand the substantial responsibility they’re taking on. The complaint alleges that in numerous instances, the Defendants failed to give cosigners that critical document.

The $1.2 million financial remedy in the proposed settlement will go in part toward debt cancellation for students who financed their education in the past five years. The Defendants will have to notify those people directly and must ask consumer reporting agencies to delete the debt from their credit reports. In addition to prohibiting a host of misrepresentations and further law violations, the order established that the Defendants can’t sell any consumer credit contracts unless the buyer agrees, in writing, that its rights are subject to the borrowers’ claims and defenses against the Defendants. The Defendants also must notify any borrower whose credit contract is being sold.

With American families are already buckling under more than $1.5 trillion in student loan debt, it adds insult to substantial injury when for-profit businesses paint a deceptively rosy picture of the likely outcomes of an education at their institutions. The proposed settlement also should serve as a reminder to companies to comply with the protective provisions of the Holder Rule and the Credit Practices Rule.

Do you know someone who attended Saint James School of Medicine between 2016 and 2022? They may be eligible for a refund. Subscribe to FTC Consumer Alerts and watch for upcoming information. 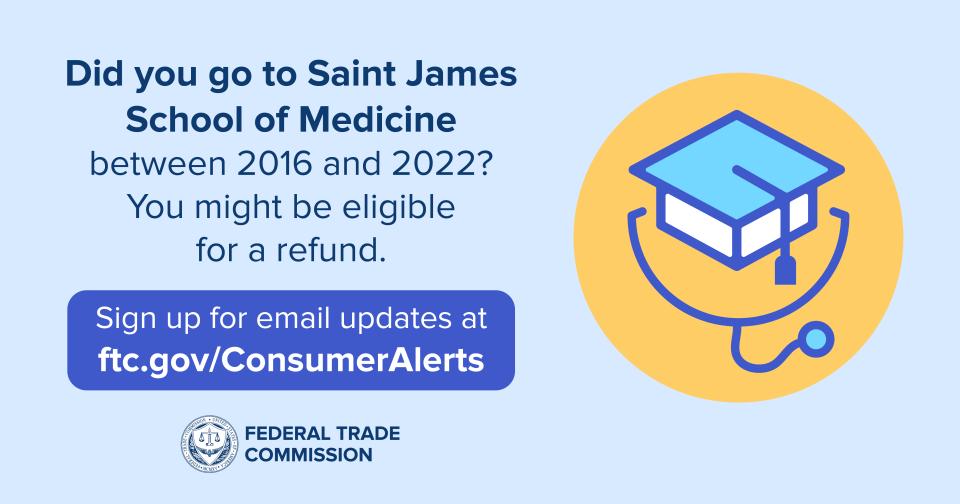