Nearly thirty percent of American jobs require a license today, up from less than five percent in the 1950s. For some professions, licensing is necessary to protect the public against legitimate health and safety concerns. But many more occupations could be practiced safely and effectively with fewer, or no, licensing requirements.

In many situations, the expansion of occupational licensing threatens economic liberty. Unnecessary licensing restrictions erect significant barriers and impose costs that cause real harm to American workers, employers, consumers, and our economy as a whole, with no measurable benefits to consumers or society. These restrictions can: 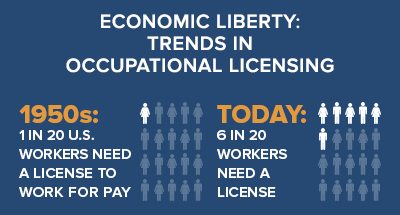 Based on recent studies, the burdens of excessive occupational licensing – especially for entry- and mid-level jobs – may fall disproportionately on our nation’s most economically disadvantaged citizens. Even in professions in which licensing makes sense, harm often arises from the complexity and duplication of state-by-state licensing requirements and fees, combined with a lack of reciprocity among states. Unnecessary licensing requirements hit military families particularly hard; these families move often, which means military spouses often must find jobs in new states that have new and different licensing requirements.

An alternative policy approach would rely on competition in the marketplace to protect the public against unqualified service providers. Voluntary certification or other mechanisms offer less restrictive alternatives that might be useful to some employers and consumers as they compare their options.

The FTC’s Economic Liberty Task Force looks forward to working with our state partners and other interested stakeholders as we bring greater attention to these important issues. Occupational licensing reform is good for competition, workers, consumers, and the American economy.

The competitive process not only drives our economy, it provides greater access, choice, quality, and other benefits for consumers. . . . I am particularly concerned that occupational licensing disproportionally affects those seeking to move up the lower and middle rungs of the economic ladder, as well as military families and veterans. Occupational licensing regulations can prevent individuals from using their vocational skills and entering new professions, as well as starting small businesses or creating new business models.”

Share your ideas with the FTC’s Economic Liberty Task Force! For example, we welcome your ideas on:

September 12, 2017
Prepared Statement of the Federal Trade Commission on Competition and Occupational Licensure
Before the Subcommittee on Regulatory Reform, Commercial and Antitrust Law of the Judiciary Committee, United States House of Representatives

February 2, 2016
Prepared Statement of the Federal Trade Commission, "License to Compete: Occupational Licensing and the State Action Doctrine"
Before the Subcommittee on Antitrust, Competition Policy and Consumer Rights of the Committee on the Judiciary, United States Senate

July 16, 2014
Prepared Statement of the Federal Trade Commission on Competition and the Potential Costs and Benefits of Professional Licensure
Before the Committee on Small Business of the United States House of Representatives

May 18, 2016
Competition, innovation, and legal services