Nordstrom, Bed Bath & Beyond, Backcountry.com, and J.C. Penney to Pay Penalties Totaling $1.3 Million for Falsely Labeling Rayon Textiles as Made of “Bamboo”

The Federal Trade Commission announced complaints and proposed court orders barring four national retailers from mislabeling and advertising rayon textiles as made of “bamboo,” and requiring them to pay civil penalties totaling $1.3 million.

“It’s misleading to call bamboo that has been chemically processed into rayon simply ‘bamboo,’” said Jessica Rich, Director of the Bureau of Consumer Protection. “With consumers in the midst of their holiday shopping, it’s important for them to know that textiles marketed as environmentally friendly alternatives may not be as ‘green’ as they were led to believe.” 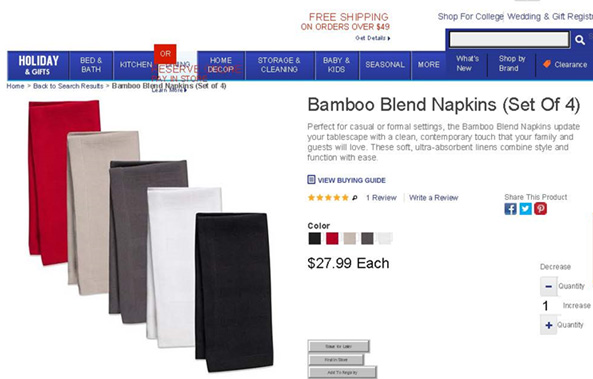 The complaints announced today allege the four companies broke the law by continuing to misrepresent or mislabel rayon products as “bamboo” despite receiving warning letters from the FTC in 2010 and a synopsis of previous litigated cases against marketers for deceptively labeling rayon products as bamboo. The Commission charged the companies with violating the Textile Act and the Textile Rules and with violating Section 5(m)(1)(B) of the FTC Act by falsely and deceptively selling the mislabeled products, despite knowing that doing so was illegal and could subject them to civil penalties.

The proposed orders settling the FTC’s charges are identical, aside from the civil penalty amounts. They prohibit the companies from violating the FTC’s Textile Act and Rules by failing to properly identify the fiber content when labeling and advertising any textiles containing manufactured fibers.

“How to Avoid Bamboozling Your Customers” provides useful information on how to correctly label and advertise textiles that are rayon made from bamboo and cautions sellers that it is highly unlikely they are selling actual bamboo fiber products. The FTC also has an educational publication for consumers called “Bamboo Fabrics.”

The FTC also announced today it is sending letters to other retailers to help protect consumers from deceptive “bamboo” claims – especially during this busy shopping season – by imploring retailers to check their own inventories and ensure proper labeling and advertising of rayon textile products.

NOTE: The Commission authorizes the filing of a complaint when it has “reason to believe” that the law has been or is being violated, and it appears to the Commission that a proceeding is in the public interest. Civil penalty orders have the force of law when signed by the District Court judge.