The Federal Trade Commission today issued the National Do Not Call Registry Data Book for Fiscal Year 2020. The FTC’s National Do Not Call (DNC) Registry lets consumers choose not to receive most legal telemarketing calls. The data show that the number of active registrations on the DNC Registry increased by two million over the past year, while the total number of consumer complaints decreased for the third year in a row.

Now in its twelfth year of publication, the Data Book contains information about the DNC Registry for FY 2020 (from October 1, 2019 to September 30, 2020). The Data Book provides the most recent fiscal year information available on robocall complaints, the types of calls consumers reported to the FTC, and a complete state-by-state analysis.

According to the Data Book, at the end of FY 2020, the DNC Registry contained 241.5 million actively registered phone numbers, up from 239.5 million at the end of FY 2019. The number of consumer complaints about unwanted telemarketing calls decreased, from 5.4 million in FY 2019 to nearly four million in FY 2020. Of those complaints, 71 percent were about robocalls, roughly the same percentage as last year, and 24 percent were about live telemarketing. In six percent of reports, the call type was not reported.

Again this year, imposters were the topic of the robocalls consumers reported the most, with more than 423,000 complaints received. However, this represents a decrease from FY 2019, when the FTC received approximately 493,000 such complaints. This decrease is representative of the decreasing number of consumer complaints overall in FY 2020, compared to the previous year. Warranties and protection plans comprised the second-most commonly reported topic, with consumers filing more than 237,000 robocall complaints.

Calls about supposed debt-reduction made up the third-most commonly reported topic, followed by complaints about medical and prescription issues, and computers and technical support.

Registration and Complaint Data by State 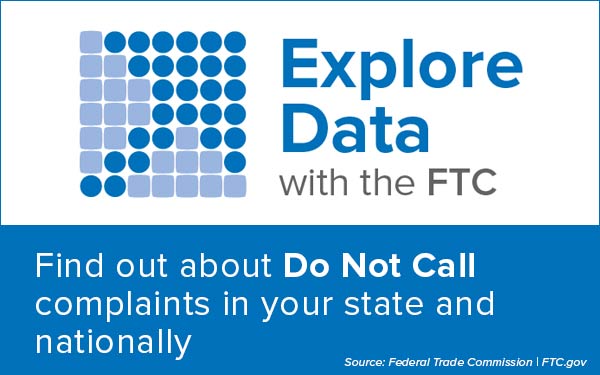 Finally, to make the information in the FY 2020 Data Book more accessible for the public, updated and interactive DNC data dashboard visualizations are available at ftc.gov/exploredata.

The number of DNC complaints about robocalls versus live callers.

National Do Not Call Registry Data Book for Fiscal Year 2020