The Federal Trade Commission proposed a new rule that would ban employers from imposing noncompetes on their workers, a widespread and often exploitative practice that suppresses wages, hampers innovation, and blocks entrepreneurs from starting new businesses. By stopping this practice, the agency estimates that the new proposed rule could increase wages by nearly $300 billion per year and expand career opportunities for about 30 million Americans.

The FTC is seeking public comment on the proposed rule, which is based on a preliminary finding that noncompetes constitute an unfair method of competition and therefore violate Section 5 of the Federal Trade Commission Act. 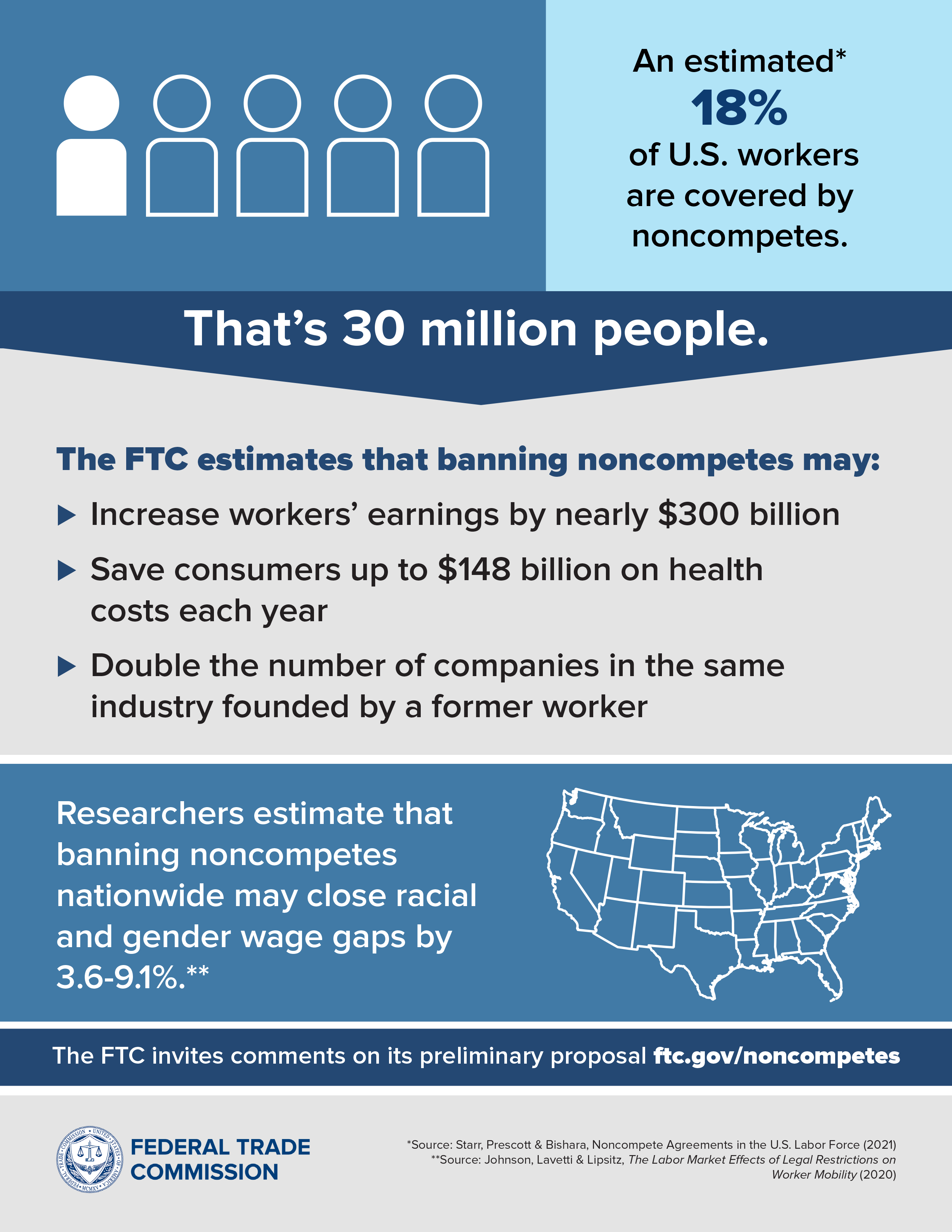 “The freedom to change jobs is core to economic liberty and to a competitive, thriving economy,” said Chair Lina M. Khan. “Noncompetes block workers from freely switching jobs, depriving them of higher wages and better working conditions, and depriving businesses of a talent pool that they need to build and expand. By ending this practice, the FTC’s proposed rule would promote greater dynamism, innovation, and healthy competition.”

Companies use noncompetes for workers across industries and job levels, from hairstylists and warehouse workers to doctors and business executives. In many cases, employers use their outsized bargaining power to coerce workers into signing these contracts. Noncompetes harm competition in U.S. labor markets by blocking workers from pursuing better opportunities and by preventing employers from hiring the best available talent.

To address these problems, the FTC’s proposed rule would generally prohibit employers from using noncompete clauses. Specifically, the FTC’s new rule would make it illegal for an employer to:

The proposed rule would apply to independent contractors and anyone who works for an employer, whether paid or unpaid. It would also require employers to rescind existing noncompetes and actively inform workers that they are no longer in effect.

This NPRM aligns with the FTC’s recent statement to reinvigorate Section 5 of the FTC Act, which bans unfair methods of competition. The FTC recently used its Section 5 authority to ban companies from imposing onerous noncompetes on their workers. In one complaint, the FTC took action against a Michigan-based security guard company and its key executives for using coercive noncompetes on low-wage employees. The Commission also ordered two of the largest U.S. glass container manufacturers to stop imposing noncompetes on their workers because they obstruct competition and impede new companies from hiring the talent needed to enter the market. This NPRM and recent enforcement actions make progress on the agency’s broader initiative to use all of its tools and authorities to promote fair competition in labor markets.

The NPRM invites the public to submit comments on the proposed rule. The FTC will review the comments and may make changes, in a final rule, based on the comments and on the FTC’s further analysis of this issue. The comment period is open through March 20, 2023.

The Federal Trade Commission works to promote competition, and protect and educate consumers. You can learn more about how competition benefits consumers or file an antitrust complaint.  For the latest news and resources, follow the FTC on social media, subscribe to press releases and read our blog.