Imposter Scams Top Complaints Made to FTC in 2018

For the first time, imposter scams topped the list of consumer complaints submitted in 2018 to the Federal Trade Commission’s nationwide Consumer Sentinel database, driven in part by a jump in reports about government imposter scams. 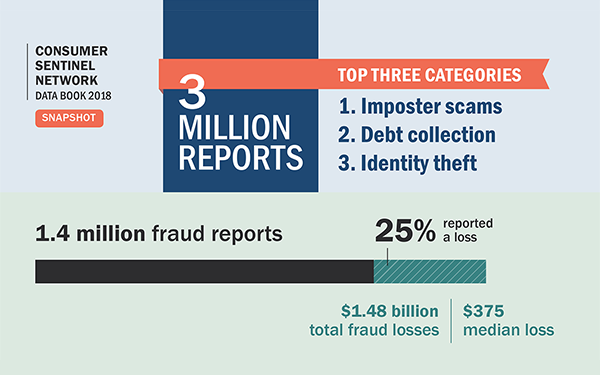 “If you get a call out of the blue from someone claiming to be from a government agency like the Social Security Administration or IRS asking you for personal information or money, it’s a scam,” said Andrew Smith, Director of the FTC’s Bureau of Consumer Protection. “You should hang up immediately and report it to the FTC at ftc.gov/complaint.”

In all, the FTC received nearly three million complaints from consumers in 2018. Consumers reported losing nearly $1.48 billion to fraud in 2018—38 percent more than the year before. Debt collection complaints dropped to the number two spot after topping the FTC’s list of consumer complaints for the previous three years.

Identity theft was the third most common complaint, and consistently ranks among the top consumer complaints made to the FTC. There was a 24 percent increase last year in identity theft reports that involved credit card fraud on new accounts. At the same time, there was a large drop (38 percent) in reports involving tax identity theft.

As in previous years, wire transfers and credit cards were the first and second most widely reported form of payment for fraud. In 2018, however, a growing number of consumers reported that scammers demanded to be paid with gift and reload cards. The number of consumers who said they paid with a gift or reload card grew from over 28,000 in 2017 to more than 41,000 in 2018, while the total amount paid using a gift or reload card to scammers nearly doubled to $78 million.

The data book includes national statistics, as well as a state-by-state listing of top report categories in each state, and a listing of metropolitan areas that generated the most complaints per 100,000 population. The top states in 2018 reporting fraud and other consumer issues were Florida, Georgia, and Nevada, while Georgia, Nevada, and California had the most reports about identity theft, per 100,000 population.

The FTC produces the Consumer Sentinel Network Data Book annually using reports received by the Consumer Sentinel Network. These include reports made directly by consumers to the FTC, as well as reports received by state and federal law enforcement agencies, national consumer protection organizations, and non-governmental organizations. In October 2018, the FTC began releasing consumer complaint data on a quarterly basis through a new interactive online format.