As the result of Do Not Call (DNC) litigation brought by the U.S. Department of Justice on behalf of the Federal Trade Commission, as well as the states of California, Illinois, North Carolina, and Ohio, a federal court in Illinois has ordered penalties totaling $280 million and strong injunctive relief against Englewood, Colorado-based satellite television provider Dish Network. 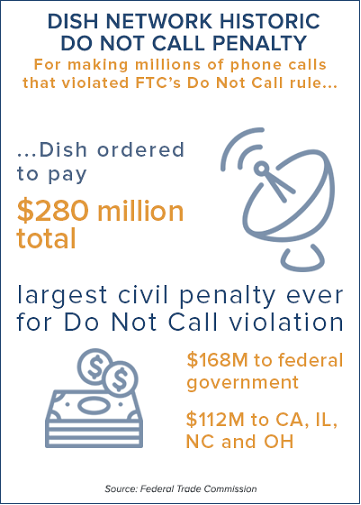 The U.S. District Court for the Central District of Illinois found Dish liable for millions of calls that violated the FTC’s Telemarketing Sales Rule (TSR) -- including DNC, entity-specific, and abandoned-call violations -- the Telephone Consumer Protection Act (TCPA), and state law. The civil penalty award includes $168 million for the federal government, which is a record in a DNC case. The remainder of the civil penalty was awarded to the states.

The $168 million judgment is the largest civil penalty ever obtained for a violation of the FTC Act.

“The outcome of this case shows companies will pay a hefty price for violating consumers’ privacy with unwanted calls,” said Maureen K. Ohlhausen, Acting FTC Chairman. “This is a great result for consumers, and I am grateful to FTC staff for their years of tenacious work investigating and developing this case. We and our DOJ and state partners will continue to bring enforcement actions against Do Not Call violators.”

“The National Do Not Call Registry is a popular federal program for the public to reduce the number of unwanted sales calls,” said Acting Assistant Attorney General Chad A. Readler of the Justice Department’s Civil Division. “This case demonstrates the Department of Justice’s commitment to smart enforcement of consumer protection laws, and sends a clear message to businesses that they must comply with the Do Not Call rules.”

The complaint counts relating to the TSR alleged that Dish initiated, or caused a telemarketer to initiate, outbound telephone calls to phone numbers on the DNC Registry, in violation of the TSR, violated the TSR’s prohibition on abandoned calls, and assisted and facilitated telemarketers when it knew, or consciously avoided knowing, that the telemarketer was engaged in violations of the law.

Dish markets its programming directly, through telemarketing vendors it contracts with to engage in telemarketing, and through authorized dealers or retailers. The court opinion ruled in favor of the federal government on all of the TSR counts in the complaint, and found more than 66 million TSR violations.

The court also stated that, “Dish initially hired Order Entry Retailers based on one factor, the ability to generate activations. Dish cared about very little else. As a result, Dish created a situation in which unscrupulous sales persons used illegal practices to sell Dish Network programming any way they could.”

According to court filings, Dish authorized Order Entry Retailers to market Dish Network programming nationally Dish would then complete the sale provide for the delivery and installation of the satellite dish and related equipment, and provide the programming.

The court also awarded injunctive relief, and all of the provisions in the permanent injunction are important to protect consumers from future harm. Below is an overview of the injunction’s first four provisions: