FTC Cracks Down on Marketers of “Melanoma Detection” Apps

The Federal Trade Commission has challenged marketers for deceptively claiming their mobile apps could detect symptoms of melanoma, even in its early stages. In two separate cases, marketers of MelApp and Mole Detective have agreed to settlements that bar them from continuing to make such unsupported claims. The agency is pursuing charges against two additional marketers of Mole Detective who did not agree to settle. 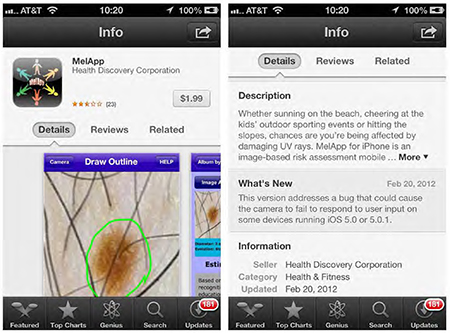 Description and example of the MelApp screen.

According to the FTC’s complaints, each of the apps instructed users to photograph a mole with a smartphone camera and input other information about the mole. The apps then purported to calculate the mole’s melanoma risk as low, medium, or high. The FTC alleged that the marketers deceptively claimed the apps accurately analyzed melanoma risk and could assess such risk in early stages. The marketers lacked adequate evidence to support such claims, the FTC charged.

“Truth in advertising laws apply in the mobile marketplace,” said Jessica Rich, Director of the FTC’s Bureau of Consumer Protection. “App developers and marketers must have scientific evidence to support any health or disease claims that they make for their apps.”

Mole Detective Settlement and Lawsuit. Kristi Kimball and her company, New Consumer Solutions LLC, developed and first marketed Mole Detective in January 2012.  U.K.-based Avrom “Avi” Lasarow and his company, L Health Ltd., took over marketing the app in August 2012.  The marketers advertised the app primarily online, where it has sold in the Apple and Google app stores for as much as $4.99.

The settlement with Kimball and her company prohibits them from claiming that a device, such as an app, can detect or diagnose melanoma, unless the representation is truthful, not misleading, and supported by competent and reliable scientific evidence in the form of human clinical testing of the device. It also prohibits them from making any other misleading or unsubstantiated health claims about a product or service, and requires them to disgorge $3,930.

The agency will pursue a litigated judgment against non-settling defendants Lasarow and his company.

MelApp Settlement. Health Discovery Corporation began marketing MelApp online in 2011 for $1.99. The proposed settlement will bar the company from claiming that any device detects or diagnoses melanoma or its risk factors, or increases users’ chances of early detection, unless the representation is not misleading and supported by competent and reliable scientific evidence in the form of human clinical testing of the device. The settlement also prohibits the company from making any other misleading or unsubstantiated claims about a device’s health benefits or efficacy. Finally, the company must disgorge $17,963.

The Commission vote authorizing staff to file the district court complaint against the Mole Detective defendants was 4-1, with Commissioner Maureen Ohlhausen voting no. The Commission vote to approve the stipulated final judgment with Kimball and New Consumer Solutions LLC also was 4-1, with Commissioner Ohlhausen voting no. The complaint in the Mole Detective matter was filed in the U.S. District Court for the Northern District of Illinois on February 23, 2015. The settlement with Kimball and New Consumer Solutions has been submitted to the court.

The Commission vote to issue the administrative complaint and accept the proposed consent order against Health Discovery Corporation was 4-1, with Commissioner Ohlhausen voting no. The FTC will publish a description of the consent agreement package in the Federal Register shortly. The agreement will be subject to public comment for 30 days, beginning today and continuing through March 25, 2015, after which the Commission will decide whether to issue the order on a final basis. Interested parties can submit written comments electronically.

NOTE: The Commission files a complaint in federal district court or issues an administrative complaint when it has “reason to believe” that the law has been or is being violated, and it appears to the Commission that a proceeding is in the public interest. Stipulated or consent orders have the force of law when approved and signed by the federal district court judge or issued by the Commission on a final basis. Each violation of an administrative order may result in a civil penalty of up to $16,000.