The Federal Trade Commission received more than 2.1 million fraud reports from consumers in 2020, according to newly released data, with imposter scams remaining the most common type of fraud reported to the agency.

Online shopping was the second-most common fraud category reported by consumers, elevated by a surge of reports in the early days of the COVID-19 pandemic. Internet services; prizes, sweepstakes, and lotteries; and telephone and mobile services rounded out the top five fraud categories.

Consumers reported losing more than $3.3 billion to fraud in 2020, up from $1.8 billion in 2019. Nearly $1.2 billion of losses reported last year were due to imposter scams, while online shopping accounted for about $246 million in reported losses from consumers.

Just over a third of all consumers who filed a fraud report with the FTC—34 percent—reported losing money, up from just 23 percent in 2019.

The FTC’s Consumer Sentinel Network is a database that receives reports directly from consumers, as well as from federal, state, and local law enforcement agencies, the Better Business Bureau, industry members, and non-profit organizations. This year, the FTC welcomed the data contributions of the FBI’s Internet Crime Complaint Center, the Florida Department of Agriculture and Consumer Services, and the Connecticut Department of Consumer Protection. Twenty-five states now contribute to Sentinel. Reports from around the country about consumer protection issues are a key resource for FTC investigations that stop illegal activities and, when possible, provide refunds to consumers. 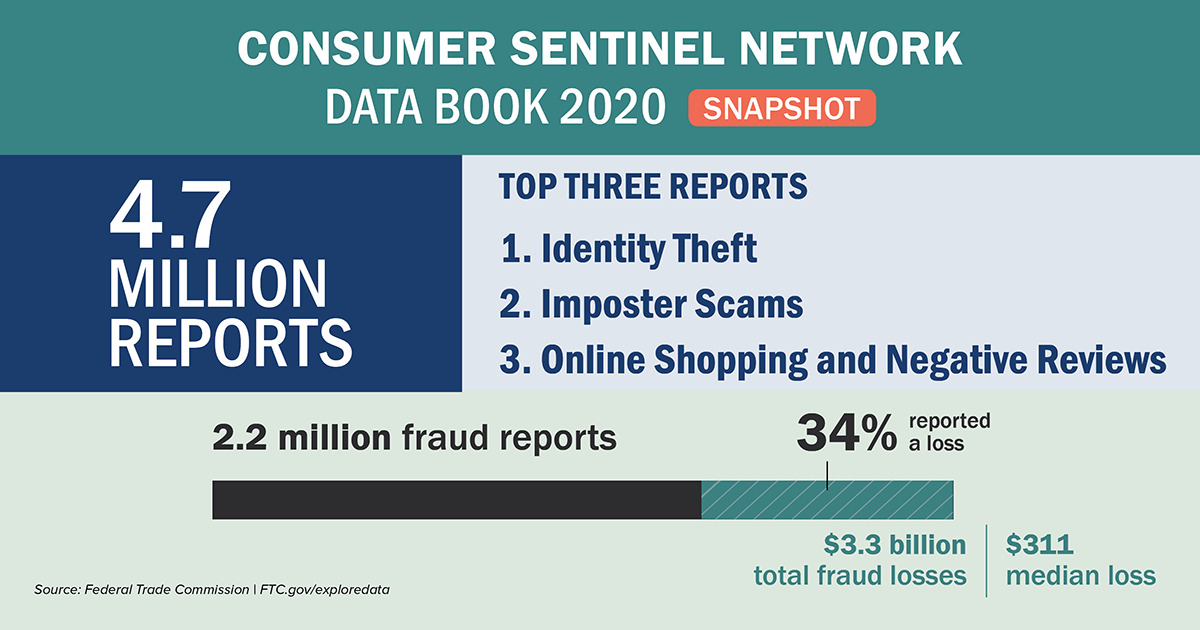 Sentinel received more than 4.7 million reports in 2020; these include the fraud reports detailed above, as well as identity theft reports and complaints related to other consumer issues, such as problems with credit bureaus and banks and lenders. In 2020, there were nearly 1.4 million reports of identity theft, received through the FTC’s IdentityTheft.gov website, about twice as many as in 2019.

Of the identity theft reports received in 2020, 406,375 came from people who said their information was misused to apply for a government document or benefit, such as unemployment insurance. That represents a tremendous increase from 2019, when the number was 23,213.

In 2020, the FTC introduced ReportFraud.ftc.gov, an updated platform for filing reports with the agency. The FTC uses the reports it receives through the Sentinel network as the starting point for many of its law enforcement investigations, and the agency also shares these reports with about 2,800 law enforcement users around the country. While the FTC does not intervene in individual complaints, Sentinel reports are a vital part of the agency’s law enforcement mission.

A full breakdown of reports received in 2020 is now available on the FTC’s data analysis site at ftc.gov/exploredata. The data dashboards there breakdown the reports across a numbers of categories, including by state and metropolitan area, as well as exploring a number of subcategories of fraud reports.