Imposter calls topped list of complaint categories in the past year
October 17, 2019

The Federal Trade Commission today issued the National Do Not Call Registry Data Book for Fiscal Year 2019. The FTC’s National Do Not Call (DNC) Registry lets consumers choose not to receive most legal telemarketing calls. The data show that the number of active registrations on the DNC Registry increased over the past year, while the total number of consumer complaints decreased for the second year in a row.

Now in its eleventh year, the Data Book contains information about the DNC Registry for FY 2019 (from October 1, 2018 to September 30, 2019). The Data Book provides the most recent information available on robocall complaints, the types of calls consumers reported to the FTC, and a complete state-by-state analysis.

According to the Data Book, at the end of FY 2019, the DNC Registry contained 239.5 million actively registered phone numbers, up from 235.3 million at the end of FY 2018. The number of consumer complaints about unwanted telemarketing calls decreased, from 5.8 million in FY 2018 to 5.4 million in FY 2019. This reflects that the FTC could not accept complaints during the recent government shutdown. Of those complaints, 71 percent were about robocalls. 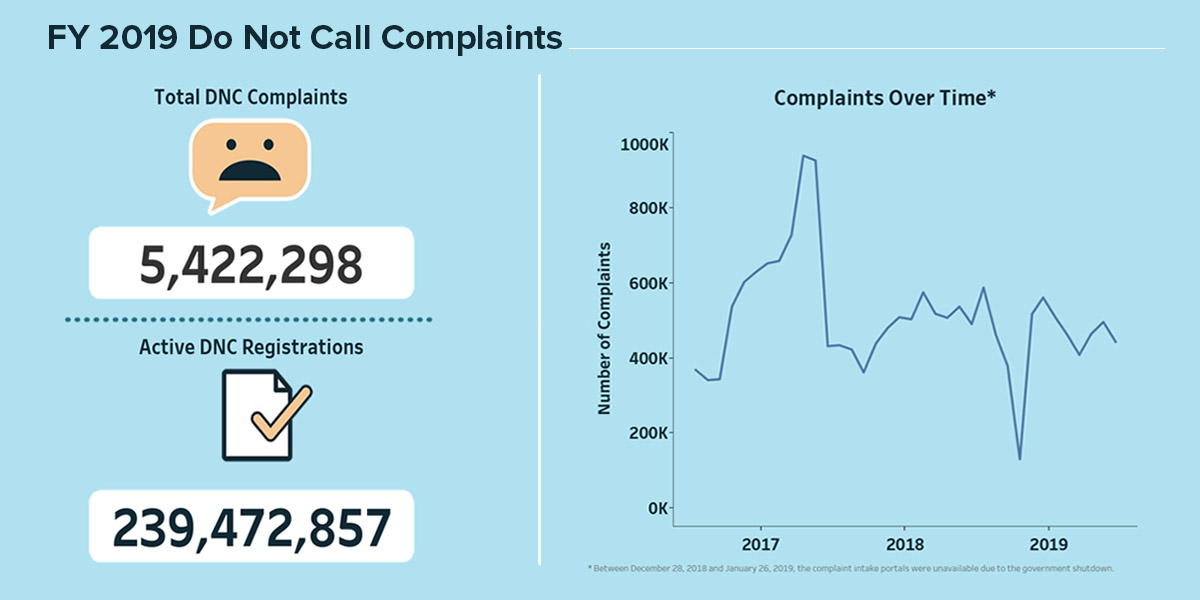 Significant Changes in the FY 2019 Data

The upward trend in imposter fraud calls complaint volume regarding began in May 2019 and increased over the remainder of the fiscal year. Calls about medical issues and prescriptions made up the second-largest category, followed by complaints about debt-reduction programs, which was the most reported topic last year.

Finally, to make the information in the FY 2019 Data Book more accessible for the public, updated and interactive DNC data dashboards are available at ftc.gov/exploredata.