FTC Obtains $2.2 Million Judgment against Supplement Marketer that Made Phony Claims for Treating and Preventing Diabetes

A federal court has found that marketers of bogus remedies for treating and preventing diabetes violated Section 5 of the FTC Act, and has ordered them to pay nearly $2.2 million. The FTC will use the funds it recovers to reimburse consumers.

The court has prohibited the company – Wellness Support Network Inc. – and its two principals, Robert Held and his daughter Robyn Held, from claiming without rigorous scientific proof that their supplements would treat and prevent diabetes, and from making other deceptive claims.

“Giving false hope to those who struggle with a serious illness is disgraceful, and the FTC is determined to ensure that deceptive marketers face the consequences,” said Jessica Rich, Director of the FTC’s Bureau of Consumer Protection.

The FTC’s case against Wellness Support Network Inc. is part of its ongoing efforts to stop bogus claims that unproven remedies can be used to prevent and treat serious diseases such as diabetes and cancer. 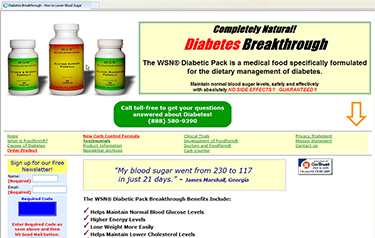 The FTC’s October 2010 case challenged claims for the defendants’ Diabetic Pack and Insulin Resistance Pack – which contained identical blends of vitamins, minerals, and plant extracts. The defendants touted the Diabetic Pack as a treatment for diabetes, and the Insulin Resistance Pack as a means of purportedly reducing insulin resistance and preventing diabetes. The defendants advertised primarily online, relying heavily on consumer testimonials and running ads that claimed a “Diabetes Breakthrough” and a “clinically proven natural solution to diabetes with a 90% success rate.”  The defendants sold the products for $76.70 for a 30-supply supply.

The court ruled in favor of the FTC’s motion for summary judgment and found that the following claims made by the marketers are false or unsupported by scientific evidence:

The U.S. District Court for the Northern District of California entered the final judgment and order on February 19, 2014.