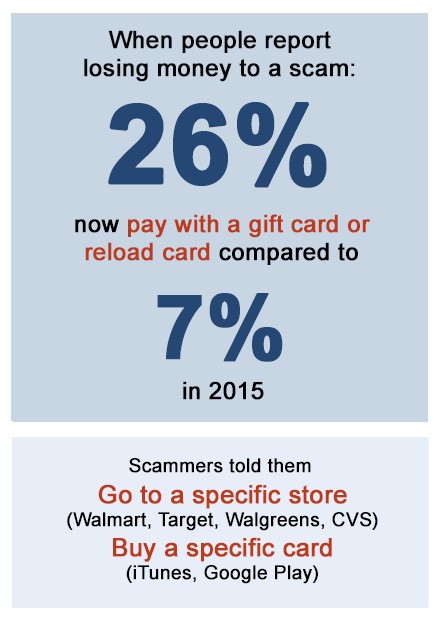 Through Consumer Sentinel we hear from people across the country about frauds they encounter in the marketplace. One thing we learn from these reports is how scammers want to be paid. People are telling us that they’re increasingly being told to pay with gift cards – specifically, by giving someone the PIN number off the back of a gift card. Often people are specifically asked for certain brands, like iTunes and Google Play cards.

To understand this issue better, we looked at fraud reported directly to the FTC. To avoid skewing the results, we excluded reports about shop-at-home purchases – this Spotlight is not about the use of gift cards to purchase retail goods, but rather their use as a payment vehicle for scams.

We found that from January through September of this year, gift cards and reload cards (like MoneyPak) were reported as a payment method in 26% of the fraud reports in which people told us how they paid, up from just 7% in 2015 – a 270% increase. Con artists favor these cards because they can get quick cash, the transaction is largely irreversible, and they can remain anonymous.

People report that con artists direct them to buy gift or reload cards at well-known stores like Walmart, Target, Walgreens, and CVS. According to these reports, they demand some specific card brands. While these change over time, iTunes cards have been the top card brand by a wide margin since 2016. By contrast, Google Play cards were not reported in significant numbers until this year.

*Percentages are based on the total number of fraud reports that identify a gift or reload card as a method of payment. Reports provided by data contributors, reports that do not specify a method of payment, and reports classified as “shop-at-home/catalog sales” are excluded. Card brands are identified through keyword analysis of the narratives provided in this subset of reports.

Stepping back to look at all fraud reports available to the FTC from all sources, we found that losses where people reported using gift or reload cards reached $40 million in 2017, up from $20 million in 2015 and $27 million in 2016 (Source: FTC Consumer Sentinel Network Data Book, 2016 and 2017). Through September of this year, that number is already $53 million. And while individual fraud losses using these cards have held steady at a $500 median loss per incident, people report losing a lot more to some types of scams. (Median loss calculations are based on all fraud reports in FTC’s Consumer Sentinel Network database that identify gift or reload card as a method of payment and include a dollar loss value of $1 to $999,999.) Tech support scams are a notable example. When people report paying for fraudulent tech support services with a gift or reload card, the median dollar loss is now $959, up nearly 60% from $600 in 2017.

It’s not just tech support scams. When people report paying a fraudster with a gift or reload card, about four times out of five the fraud they report is an imposter scam – in fact, gift cards and reload cards are now the number one reported method of payment for imposter scams. These scammers pose as well-known businesses, family members, friends, or government agencies. They deploy various tactics to compel people to pay. They may pretend to be the IRS and tell people they cannot use other payment methods because of their delinquent tax status. They may even call iTunes cards “payment vouchers.” To avoid alerting store personnel, they often direct people to buy cards from several different stores, and they tell people not to talk to anyone about why they are buying the cards.

Familiarity with these tactics and awareness of the prevalence of gift cards and reload cards as a method of payment for fraud may help people to recognize and avoid a wide range of scams. When someone demands to be paid with a gift card, that’s a scam.

Payments to a fraudster made by gift card or reload card should be reported immediately to the card issuer. It may not be possible to stop funds from being withdrawn from the card, but it is important to alert companies to card fraud. Consumers should also report details of the incident to the FTC at FTC.gov/complaint. To learn more, visit FTC.gov/giftcards.