As part of a $105 million settlement with federal and state law enforcement officials, AT&T Mobility LLC will pay $80 million to the Federal Trade Commission to provide refunds to consumers the company unlawfully billed for unauthorized third-party charges, a practice known as mobile cramming. The refunds are part of a multi-agency settlement that also includes $20 million in penalties and fees paid to 50 states and the District of Columbia, as well as a $5 million penalty to the Federal Communications Commission.

In its complaint against AT&T, the FTC alleges that AT&T billed its customers for hundreds of millions of dollars in charges originated by other companies, usually in amounts of $9.99 per month, for subscriptions for ringtones and text messages containing love tips, horoscopes, and “fun facts.” In its complaint, the FTC alleges that AT&T kept at least 35 percent of the charges it imposed on its customers.

“I am very pleased that this settlement will put tens of millions of dollars back in the pockets of consumers harmed by AT&T’s cramming of its mobile customers,” said FTC Chairwoman Edith Ramirez. “This case underscores the important fact that basic consumer protections – including that consumers should not be billed for charges they did not authorize - are fully applicable in the mobile environment.”

Beginning today, consumers who believe they were charged by AT&T without their authorization can visit www.ftc.gov/att to submit a refund claim and find out more about the FTC’s refund program under the settlement. If consumers are unsure about whether they are eligible for a refund, they can visit the claims website or contact the settlement administrator at 1-877-819-9692 for more information.

The FTC’s investigation into AT&T showed that the company received very high volumes of consumer complaints related to the unauthorized third-party charges placed on consumer’s phone bills. For some third-party content providers, complaints reached as high as 40 percent of subscriptions charged to AT&T consumers in a given month. In 2011 alone, the FTC’s complaint states, AT&T received more than 1.3 million calls to its customer service department about the charges.

According to the complaint, in October 2011, AT&T altered its refund policy so that customer service representatives could only offer to refund two months’ worth of charges to consumers who sought a refund, no matter how long the company had been billing customers for the unauthorized charges. Prior to that time, AT&T had offered refunds of up to three months’ worth of charges. At that time, AT&T characterized its change in policy as designed to “help lower refunds.”

In February 2012, one AT&T employee said in an e-mail that “Cramming/Spamming has increased to a new level that cannot be tolerated from an AT&T or industry perspective,” but according to the complaint, the company did not act to determine whether third parties had in fact gotten authorization from consumers for the charges placed on their bills. In fact, the company denied refunds to many consumers, and in other cases referred the consumers to third-parties to seek refunds for the money consumers paid to AT&T. 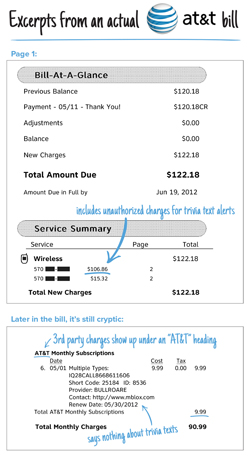 The structure of AT&T’s consumer bills compounded the problem of the unauthorized charges, according to the complaint, by making it very difficult for customers to know that third-party charges were being placed on their bills. On both the first page of printed bills and the summary of bills viewed online, consumers saw only a total amount due and due date with no indication the amount included charges placed on their bill by a third party. The complaint alleges that within online and printed bills, the fees were listed as “AT&T Monthly Subscriptions,” leaving consumers to believe the charges were part of services provided by AT&T.

Under the terms of its settlement with the FTC, AT&T must notify all of its current customers who were billed for unauthorized third-party charges of the settlement and the refund program by text message, e-mail, paper bill insert and notification on an online bill. Former customers may be contacted by the FTC’s refund administrator.

NOTE: The Commission files a complaint when it has “reason to believe” that the law has been or is being violated and it appears to the Commission that a proceeding is in the public interest. Stipulated orders have the force of law when approved and signed by the District Court judge.