Not what you think: Millennials and fraud 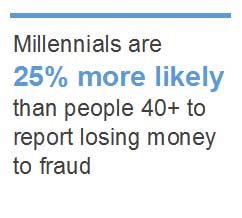 People sometimes think scams mostly affect older adults, but reports to Consumer Sentinel tell a different story. People in their 20s and 30s, a cohort that roughly tracks the so-called Millennial generation, are 25% more likely to report losing money to fraud than people 40 and over generally,1 and much more likely to report a loss on certain types of fraud.

The top five frauds to which Millennials report losing money are online shopping frauds, business imposters, government imposters, fake check scams, and romance scams. People 40+ report those same scams, too, but the data suggest that, with the exception of romance scams, Millennials may be less likely to avoid them or may encounter them more often. For example, Millennials are twice as likely as people 40+ to report losing money while shopping online. Frequently, shopping-related reports to the FTC are about items that are never delivered or aren’t as advertised. Millennials are also more likely than their older counterparts to report fraud losses on scams that promise to fix debt-related problems or that promise money through jobs, investments, or business opportunities.2 Millennials are 93% more likely than people 40+ to report losing money to fake check scams, which also often look like a way to earn money.3

The likelihood of losing money is just part of the story—how much people lose is also important. The median individual amount Millennials report losing to fraud is $400, much lower than what people 40+ report.4 But those individual losses add up: Millennials have reported losing nearly $450 million to fraud in just the past two years.5 Of that, online shopping accounted for $71 million in reported losses, and government imposter scams were close behind, with $61 million in reported losses.

The likelihood of reporting a loss varies by how people are first contacted by a scammer, and there are age differences here, too. While phone calls are the top contact method reported for people of all ages, Millennials report losing money to phone scams at slightly lower rates than people 40+. But Millennials are more likely to report losing money to frauds that start in other ways6 —most notably, Millennials are 77% more likely than their older counterparts to say they lost money to a scam that started with an email.

The most important takeaway: fraud affects every generation. If someone has contacted you to demand money or your personal information – stop. Talk to someone you trust. And check out the request.

Here are some resources to help you navigate some of the scams hitting Millennials the hardest:

If you spot a scam, report it to the FTC at ftc.gov/complaint.

1 From September 2017 through August 2019, people 20–39 filed fraud reports indicating that they lost money (“loss reports”) at a rate 25% higher than than people 40 and over. 47% of Sentinel fraud reports included usable age information during this period. The age comparison is normalized, based on the number of loss reports per million population by age. Population numbers used in this Spotlight were obtained from the U.S. Census Bureau Annual Estimates of the Resident Population for Selected Age Groups by Sex for the United States, States, Counties and Puerto Rico Commonwealth and Municipios (June 2019).

2 Based on a comparison of reporting rates by people 20–39 and people 40 and over on the following fraud types from September 2017 through August 2019 (percent difference in loss reporting rates as compared to people 40 and over noted in parentheses): advance-fee loans\credit arrangers (+34%), credit repair (+85%), debt management\credit counseling (+86%), business opportunities\work-at-home-plans (+42%), employment agencies\job counseling\overseas work (+380%), investment (+48%), and multi-level marketing\pyramids\chain letters (+90%). Age comparisons based on loss reports per million population by age

3 People are often told to deposit a check and keep some of the money as payment for a phony offer to earn income. Using various ruses, scammers then direct people to send some of the money back to them. For example, people may believe they are buying equipment or supplies for an internship or sales job. Many people have reported using some of the money to send wire transfers or buy gift cards at a store they believed they were evaluating as a secret shopper. Once the bank identifies the check as a fake, the consumer may be responsible for any funds sent. These scams take advantage of unfamiliarity with how banks process checks and the terminology used. Banks are required to make check deposit funds available quickly, and consumer may even be told the check has “cleared.” However, it can take weeks for banks to identify a check as fraudulent.

6 The rank order of contact methods by loss reports filed by Millennials from September 2017 through August 2019 is as follows (percent difference in loss reporting rates as compared to people 40 and over noted in parentheses): phone (-5%), online (+14%), e-mail (+77%), consumer initiated contact (+23%), mail (+12%). Age comparisons are normalized, based on loss reports per million population by age.