If the mere thought of your computer being hacked frightens you, you’re not alone. And tech support scammers know how to exploit that fear to their own advantage. They work to scare you into believing your computer is compromised and then offer to “fix” the problem – for a fee. The FTC’s Consumer Sentinel Network got nearly 143,000 reports about tech support scams in 2018.1

These scams usually start with a phone call or a pop-up warning of a computer problem that gives a number to call. People tell us the scammers often claim to be Microsoft or Apple – they may even spoof caller ID to make it look like one of these companies really is calling. In another twist, they get people who actually do need computer help to call them by posting phony customer support numbers for well-known companies online. 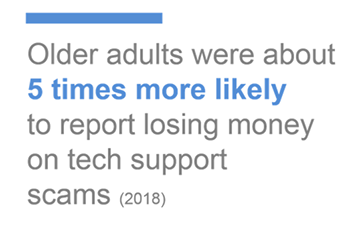 These scammers convince people to hand over remote access to their computer and then make a big show of “troubleshooting.” They may open system folders or run scans that seem to show evidence of a problem. Then they ask for money for supposed repairs and things like bogus service contracts.

In 2018, people reported losing $55 million to these scams. And while many people did not lose any money, those who did reported losing hundreds: the median individual reported loss was $400. Credit cards were the top method of payment people said they used, and that’s good news – credit card companies can reverse fraudulent charges. But many others said the scammer convinced them to pay by giving the PIN numbers on the back of gift cards, often iTunes or Google Play cards. For most in this group, the money is simply gone.

But money isn’t the only thing people lose on this scam. By allowing scammers remote access to their computer, people hand over control. Scammers can then readily steal sensitive information or install spyware – a form of malware that lets them quietly gather information. People have even been persuaded to log into their bank accounts, often on the pretext of depositing a refund, allowing the scammer to move funds remotely.

Here are some things you can do to avoid these scams:

1 Figure based on 142,904 reports to Sentinel in 2018 that were classified as tech support scams. 105,676 of these reports were provided by Microsoft Corporation’s Cybercrime Center.

2 For age comparisons of other Sentinel fraud types, see Figure 4 of Protecting Older Consumers 2017 - 2018. A Report of the Federal Trade Commission.

3 Figures based on the number of 2018 tech support scam reports that indicated a monetary loss ($1 - $999,999) per million population by age. People who said they were 20 – 59 filed loss reports at a rate of 21.5 reports per million people in this age group, while people who said they were 60 and over filed 104.2 loss reports per million people in this age group. Population numbers obtained from the U.S. Census Bureau: U.S. Census Bureau, Annual Estimates of the Resident Population for Selected Age Groups by Sex for the United States, States, Counties and Puerto Rico Commonwealth and Municipios (June 2018). In 2018, 31,043 tech support scam reports to Sentinel included usable age information.