In 2018, the Consumer Sentinel Network has seen a striking increase in the median dollar amount that people 70 and over are saying they lost to fraud. Digging into the data, we found some common stories with an unusual twist: people 70 and older report mailing huge amounts of cash to people who pretended to be their grandchildren.

We call these family and friend imposter scams, but you may know them as the “grandparent scam” and with good reason. People 70 and over report that the scammer posed as a grandchild, usually a grandson, about 70% of the time.2

When we looked at fraud reports from all age groups, and from all Sentinel data contributors,5 we found that aggregate losses to family and friend imposters have increased. Losses over the past year reached $41 million, as compared to $26 million in the previous year.6

Like many scams, these start with a phone call7 using some common ploys. In about half of the reports of cash payments, people said the caller claimed to be in jail or other legal trouble.8 About a third of these reports mentioned a so-called car accident (some mentioning texting or drinking while driving).9 In both cases, the callers play on people’s emotions and sense of loyalty: they may be told they’re the only person trusted enough to call for help, and they’re often told not to tell anyone. 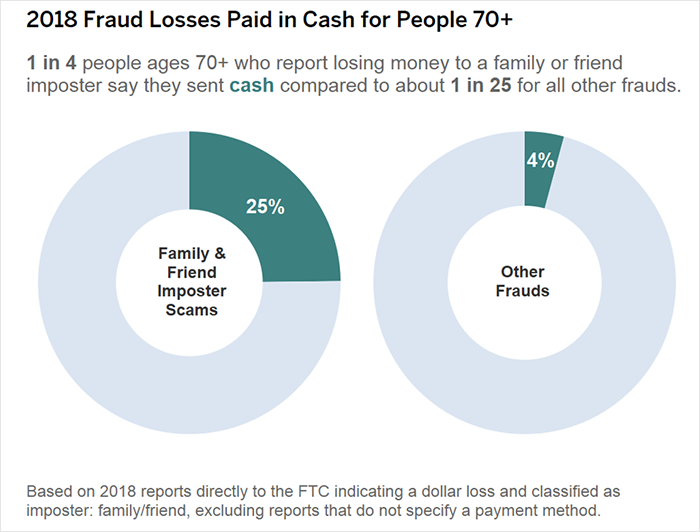 These scammers are experts at impersonating people they’ve never even met. Car accident injuries, often broken noses, or uncontrolled sobbing explain away a voice that might not sound quite right. Scammers use personal details from social media sites to make their stories more believable. Or they may simply wait for their target to use a name – “Steve, is that you?” – and take the cue.

What can you do about these scams? Talk about them. Many people have gotten these calls, so help others know what to do to spot and avoid the scam:

If you’ve mailed cash, report it right away to the Postal Service or whichever shipping company you used. Some people have been able to stop delivery by acting quickly and giving a tracking number. Also tell the FTC at FTC.gov/complaint. Learn more about this and other imposter scams at FTC.gov/imposters.