People looking for romance are hoping to be swept off their feet, not caught up in a scam. But tens of thousands of reports in Consumer Sentinel show that a scam is what many people find. In 2018, Sentinel had more than 21,000 reports about romance scams, and people reported losing a total of $143 million – that’s more than any other consumer fraud type identified in Sentinel.1 These reports are rising steadily. In 2015, by comparison, people filed 8,500 Sentinel reports with dollar losses of $33 million.

Romance scammers lure people with phony online profiles, often lifting photos from the web to create attractive and convincing personas. They might make up names or assume the identities of real people. Reports indicate the scammers are active on dating apps, but also on social media sites that aren’t generally used for dating. For example, many people say the scam started with a Facebook message.

Once these fraudsters have people by the heartstrings, they say they need money, often for a medical emergency or some other misfortune. They often claim to be in the military and stationed abroad, which explains why they can’t meet in person. Pretending to need help with travel costs for a long-awaited visit is another common ruse.

Scammers can reap large rewards for time spent courting their targets. The median individual loss to a romance scam reported in 2018 was $2,600, about seven times higher than the median loss across all other fraud types.2 People often reported sending money repeatedly for one supposed crisis after another. 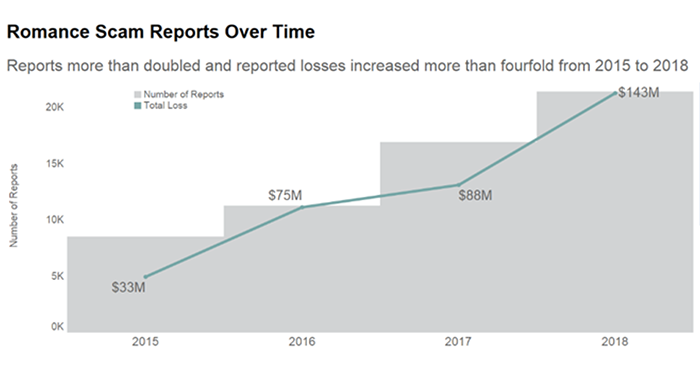 People who said they were ages 40 to 69 reported losing money to romance scams at the highest rates – more than twice the rate of people in their 20s.3 At the same time, people 70 and over reported the highest individual median losses at $10,000.4

Among people who told us how they paid the scammer, the majority said they wired money. The next largest group said they sent money using gift and reload cards (like Moneypak), and reports of this type of payment increased in 2018. People said they mailed the cards or gave the PIN number on the back to the scammer. Con artists favor these payment methods because they can get quick cash, the transaction is largely irreversible, and they can remain anonymous.

So what can singles do to play it safe while dating online? Here are some tips to help spot bogus suitors:

Help stop these scammers by reporting suspicious profiles or messages to the dating or social media site. Then, tell the FTC at FTC.gov/complaint.

1Figures based on 21,368 reports submitted directly to FTC and by all Sentinel data contributors in 2018 that were classified as romance scams.

2Median loss calculations are based on reports submitted in 2018 that indicated a monetary loss of $1 to $999,999. Reports provided by MoneyGram, Western Union, and Green Dot are excluded for this calculation as these data contributors report each transaction separately, which typically affects calculation of an individual’s median loss.

4Median loss calculations are based on reports submitted in 2018 that indicated a monetary loss of $1 to $999,999. Reports provided by MoneyGram, Western Union, and Green Dot are excluded as these data contributors report each transaction separately, which may affect the median loss.