The Federal Trade Commission and the state of Arkansas sued the operators of a “blessing loom” investment program, alleging that it has operated as an illegal pyramid scheme that bilked tens of millions of dollars from thousands of consumers, and targeted African Americans and harmed people struggling financially during the COVID-19 pandemic.

In their joint complaint, the FTC and Arkansas charged that the operators of Blessings in No Time (“BINT”) have lured people into joining their program by falsely promising investment returns as high as 800 percent. The complaint alleges that some BINT members paid as much as $62,700 to participate. In reality, though, as in other pyramid schemes, the vast majority of participants have lost money, the complaint alleges.

“The COVID-19 pandemic attacked Americans’ health and their wallets,” said Daniel Kaufman, Acting Director of the FTC’s Bureau of Consumer Protection. “These scammers, who specifically targeted Black communities, used false promises of wealth to deceive consumers out of money at a time that Americans could least afford to lose it.”

The complaint seeks to permanently enjoin BINT’s illegal operation and asks the court to award redress for injured consumers. The complaint also seeks to impose civil penalties on the defendants under Arkansas state law.

The complaint names as defendants the operators of BINT, Texas-based BINT Operations LLC, and its two co-founders, LaShonda Moore and her husband Marlon Moore.

The Moores began promoting BINT as early June 2020, according to the complaint. Like most blessing looms, BINT allegedly has coordinated payments (called “blessings”) between members using playing boards with different levels. The complaint alleges that, in one version of the defendants’ scheme, BINT’s playing board had four levels with 15 spots. Members on the second level were tasked with recruiting new participants to join their playing board on the first level. Once a board had been filled with new recruits and those recruits had paid the individual at the center of the playing board, the individual in the middle of the original board would be removed. The board would then be split into two new boards, and all remaining members would move up one level toward the center of the board, where they would then receive payments from new recruits. The complaint alleges that this process would repeat indefinitely, as illustrated below in the FTC’s graphic: 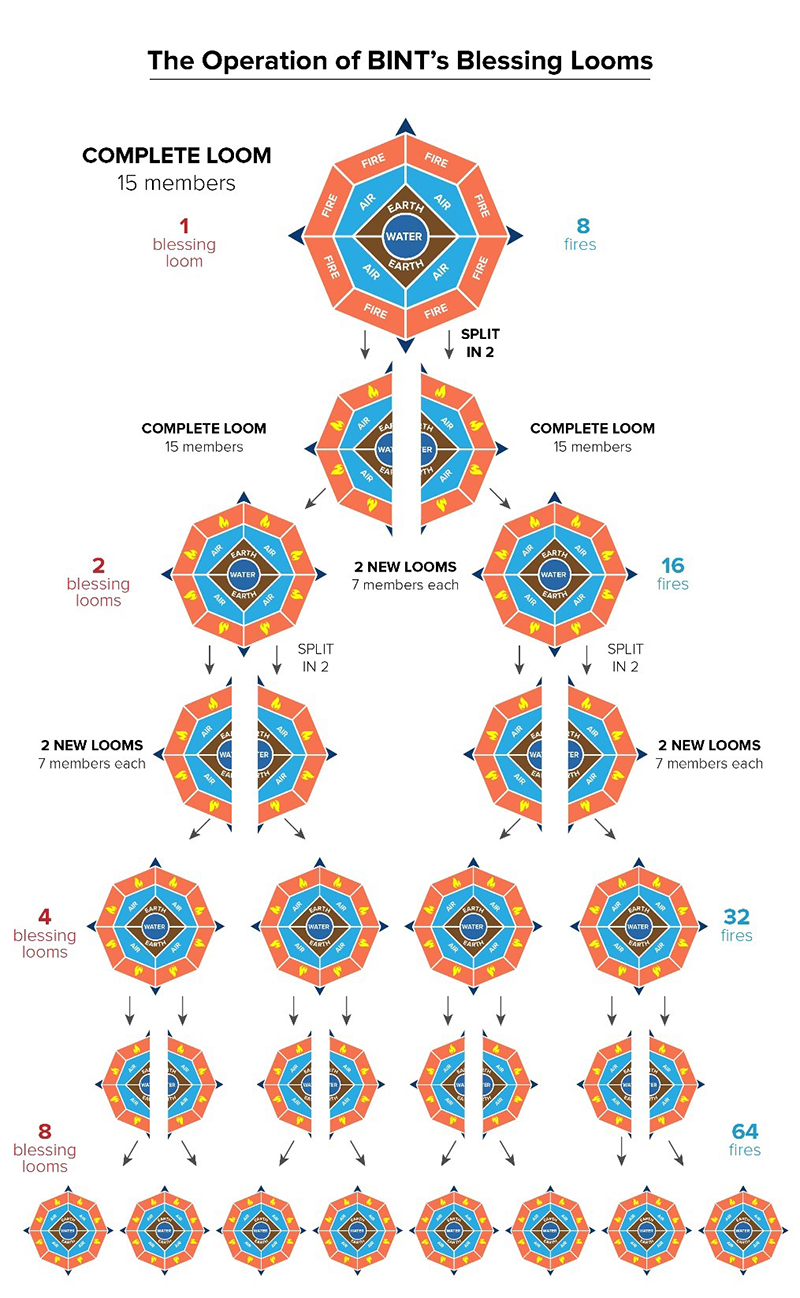 The Operation of BINT's Blessing Looms

The operators of BINT have required a minimum of $1,400 to participate in the program, but told members that they could earn greater revenue by contributing more money and recruiting additional members, the complaint states.

The defendants have primarily targeted African American communities through their scheme, according to the complaint. The complaint states that BINT’s website describes BINT as  a new type of investing or fundraising that would permit members achieve financial freedom and to “do everything from pay[ing] for your own surgery to fulfill[ing] a student’s dream of attending college—and so much more.” In promoting BINT, the defendants have also described it as a community-oriented program where members would work together to help each other achieve financial success, according to the complaint. The complaint also alleges the defendants assured participants they would not lose money and could withdraw at any time and receive a full refund.

In reality, the complaint alleges, BINT is structured as a pyramid scheme. The supposed investment returns BINT has promised to participants were merely funds paid by other members. BINT’s pyramid structure requires that it grow perpetually and exponentially because, for every member who received the promised payout, eight additional members had to pay into the scheme. No matter how many members receive the promised payout, many more members would necessarily lose money, the complaint notes.

Moreover, the defendants tried to hide their illegal activity by telling participants not to use certain payment apps or payment processors. The complaint also alleges that the defendants have illegally prohibited participants from posting truthful, non-defamatory reviews and other information about BINT on social media or the Internet.

Blessings in No Time

Blog: Blessings in No Time: A blessing – or a pyramid scheme?