Funds for these payments come from the FTC’s settlements with Reckitt Benckiser Group and Indivior, Inc. who took advantage of their unique market position to scare consumers away from generic Suboxone tablets
May 10, 2021 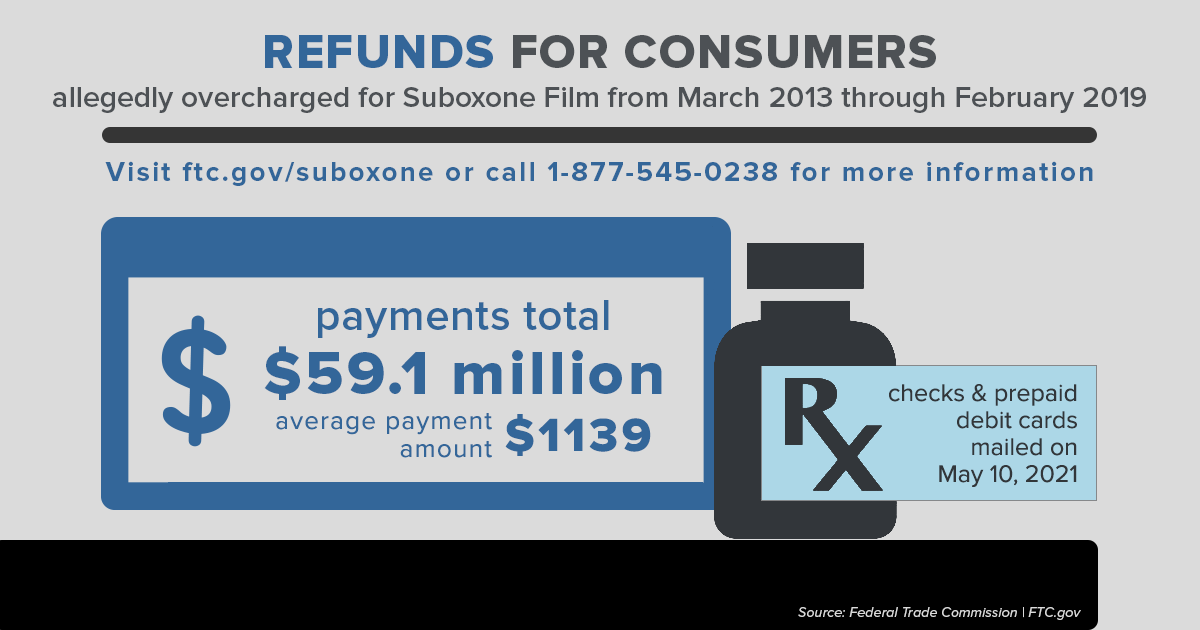 The Federal Trade Commission is sending 51,875 payments totaling more than $59 million to consumers who were victims of an allegedly deceptive scheme by Reckitt Benckiser Group and Indivior, Inc. to thwart lower-priced generic competition with the branded drug Suboxone. The average payment amount is $1,139. The payments will be mailed today.

Suboxone is a prescription oral medication used to minimize withdrawal symptoms in patients recovering from opioid addiction. The FTC alleged that Reckitt Benckiser and Indivior sought to deny consumers a lower-cost generic alternative to maintain their lucrative monopoly on the branded drug.

“The FTC does not tolerate the kind of deceptive practices that make it harder or more expensive to get prescription medication. The Suboxone Film scheme put Americans’ health and safety at risk by using a unique market position to scare consumers,” said FTC Acting Chairwoman Slaughter. “Today the check is in the mail for over 50,000 people suffering from opioid addition – a pandemic in its own right still ravaging our communities – who were misled by these parties. While we trust the settlement has sent a strong warning to copycat companies, the FTC remains diligent in its work to promote a safe and competitive marketplace.”

According to the complaints, before the generic versions of Suboxone tablets became available, Reckitt and its former subsidiary Reckitt Benckiser Pharmaceuticals, now known as Indivior, Inc., developed a dissolvable oral film version of Suboxone and worked to shift prescriptions to this patent-protected film. Worried that doctors and patients would not want to switch to Suboxone Film, Reckitt and Indivior allegedly employed a “product hopping” scheme in which they misrepresented that the film version of Suboxone was safer than Suboxone tablets because children are less likely to be accidentally exposed to the film product. The complaints also alleged that, to buy more time to move patients to the film version of Suboxone, Indivior filed a meritless citizen petition with the FDA reciting the same unsupported safety claims and requesting that the agency reject any generic tablet application.

In settlements reached with Reckitt and Indivior, the FTC required the companies to disgorge the money for these payments under Section 13(b) of the FTC Act. In 2020, FTC actions led to more than $482 million in refunds to consumers across the country, but recently the United States Supreme Court ruled the FTC lacks authority under Section 13(b) to seek monetary relief in federal court going forward. The Commission has urged Congress to restore the FTC’s ability to get money back for consumers.

The deadline to file a claim has passed. Recipients who have questions about these payments should contact the refund administrator, JND Legal Administration, at 1-877-545-0238.

The FTC’s interactive dashboards for refund data provide a state-by-state breakdown of FTC refunds. FTC actions led to more than $483 million in refunds to consumers across the country in 2020.

The Federal Trade Commission works to promote competition, and protect and educate consumers. You can learn more about how competition benefits consumers or file an antitrust complaint.  For the latest news and resources, follow the FTC on social media, subscribe to press releases and read our blog.